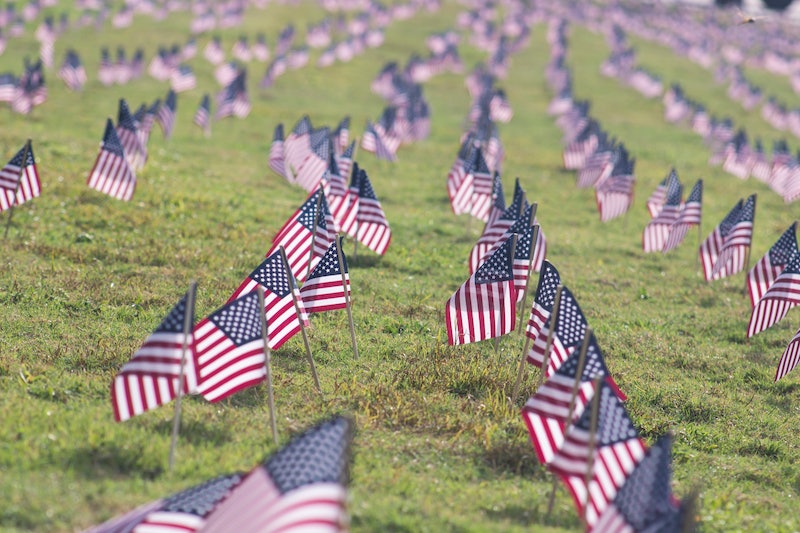 Like every good American, I look forward to any holiday that falls on a Monday, especially during the warmer months, because like everyone else, I can't wait for a day filled with cookouts, trips to the beach, and more importantly, no work. While having a day off for fun and relaxation is always nice, these Memorial Day facts about its history will make you appreciate more than just hot dogs and hamburgers this holiday.

Though modern Memorial Day celebrations are centered around barbecues, beach trips, and blow-out sales, the holiday's history is much more meaningful than that. A tradition that began during the Civil War, Memorial Day was, in its earliest form, the simple practice of honoring fallen soldiers by decorating their grave sites. During the years following the bloodiest war in American history, the country struggled to come together as a whole again and repair itself from four years of death and destruction, and as a way to start the healing process and honor those who had lost their lives, several southern states began to observe and publicize Memorial Day celebrations. Northern states soon followed suit with their own tradition, Decoration Day, and over the next 100 years, Memorial Day was celebrated nationwide unofficially until it was finally declared a federal holiday in 1971.

Now, over a century later, Memorial Day seems to have fallen out of focus and become less about honoring the past and more about taking advantage of a day off. While the tradition of decorating graves is still alive and well, and many cities host parades and other official celebrations to mark the day, the holiday's traditions and history seem to have gotten lost in the noise of sizzling hamburgers and kids splashing in the pool.

In case you need a reminder of the meaning of this patriotic holiday, here are 10 Memorial Day facts that will change the way you celebrate.

1. Memorial Day Has Its Roots In The Civil War

The Civil War was the deadliest conflict in U.S. history, and after its conclusion, the country had to create its first national cemeteries to accommodate all the bodies of fallen soldiers. In the late 1860s, Americans began the tradition of decorating the graves of fallen heroes in their towns and cities. From that tradition, Memorial Day was born.

2. Recently Freed Slaves Organized One Of The First Commemorations

In 1865, recently freed slaves, teachers, missionaries, and soldiers joined forces in Charleston, S.C., to honor the over 250 deceased Union soldiers buried in a Confederate prison camp. The group worked together to properly rebury the bodies, and when their work was done, they came together with community members, school children, social and aid organizations, and more to remember the fallen dead and decorate their new burial sites. It is considered one of the earliest Memorial Days in the U.S.

In its earliest days, Memorial Day went by another name in the northern states — Decoration Day. Organizers in several cities and states began the spring tradition of decorating graves of soldiers and taking time to remember their sacrifices.

4. The Holiday Was "Founded" By General John A. Logan

General John A. Logan of the Grand Army of the Republic, a veteran soldier of the Mexican-American and Civil War who would later become a celebrated politician, was the man behind one of the first Decoration Days. In 1868, he started the celebration we now call Memorial Day, a special day he proclaimed was meant to honor Americans who died “in defense of their country during the late rebellion” and beyond.

While a lot of Memorial Day's history seems to be often forgotten, one tradition remains: decorating the graves of soldiers. In the Arlington National Cemetery, the 3rd U.S. Infantry Regiment, otherwise known as the Old Guard, has been putting flags on the more than 260,000 graves every Memorial Day for over 60 years. The tradition is known as "Flags In."

Decoration Day in the northern states was meant to honor the fallen soldiers of the Union Army, but southern states wanted to honor their dead brothers and sisters, too. Confederate Memorial Day is still a state holiday in several southern states, including Texas, Alabama, Georgia, Mississippi, Florida, South Carolina, and North Carolina, and its traditions include ceremonies, grave decorating, re-enactments, and church services.

7. Red Poppies Are The Symbol Of The Holiday

The tradition of wearing red poppies to honor Memorial Day started in 1915 and was inspired by a World War I poem by John McCrae, "In Flanders Fields." After Moina Michael, an American war secretary, read the poem whose lines include "In Flanders fields the poppies blow/ Between the crosses, row on row," Michael began wearing a silk poppy to honor fallen soldiers and eventually started selling them to her friends and coworkers, and even campaigned for them to become an official symbol of memorial. In 1921, the American Legion adopted the poppy as their symbol, and still sells them on Memorial Day today.

8. Waterloo, New York Is Recognized As The Birthplace Of Memorial Day

May different cities and towns, including Boalsburg, Pennsylvania, claim to be the birthplace of Memorial Day, but Waterloo, New York, is officially considered the starting place of the holiday. Thanks to a presidential proclamation in 1966, Waterloo, a town that has held a Memorial Day celebration annually since 1866, is the only town that can make that claim to fame, though many others still try.

9. Activists Use The Day To Bring Attention To POWs And Soldiers MIA

This Memorial Day marks the 29th Rolling Thunder Annual Memorial Day Demonstration, an activist tradition started by Vietnam War veterans that seeks to bring attention to prisoners of war and soldiers missing in action. For nearly three decades, thousands of bikers descend on Washington, D.C., each Memorial Day weekend to not only raise awareness for their cause, but to remember those soldiers missing or lost, to visit memorials, and to hear speeches from other veterans, supporters, and politicians.

10. Memorial Day's Moment Of Silence Is A Law

When Memorial Day's moment of silence comes around on Monday, you shouldn't just observe it because it's respectful, but because it's the law. In 2000, Congress passed legislation declaring 3 p.m. local time the National Moment of Rememberance, and in 2010, Barack Obama released a Presidential Proclamation asking all Americans to observe the moment.