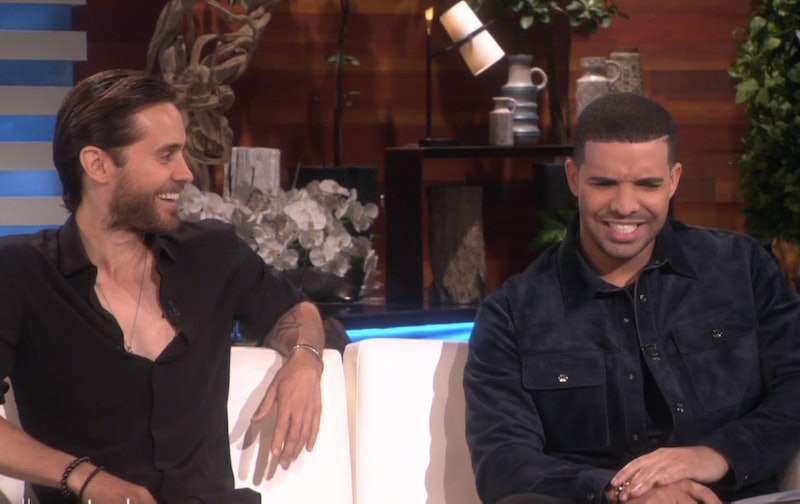 Toronto's finest rapper appeared on The Ellen Degeneres Show on Wednesday to settle one important question that has preoccupied our generation. Namely, who's shadier when it comes to playing a game of Never Have I Ever: Drake or Jared Leto? If you can't answer right away before even seeing Drake and Leto's Never Have I Ever game, I don't blame you. Your mind might not be quite ready for these massive revelations.

I have a lot of very specific, concrete opinions on Drake because I'm an entertainment journalist in the year 2016, and Drake is basically the king of the world. If you'd just asked me to guess, my personal hypothesis would have been Drake would definitely be the shadier of the pair when playing this game. Despite his reputation for divulging, if anything, too many personal details about himself, Drake is a little bit sneaky with how he phrases things. The man's a poet, after all. And Jared Leto? Well, Leto is always and forever Jordan Catalano to me and therefore has all the specific characteristics I associate with Jordan Catalano, such as being sort of quiet and attractive and bro-y and speaking his mind because he's not tricksy enough to engage in the mental gymnastics required by a lie.

This turned out to be so not the case. Leto was a seriously slippery character when it comes to Never Have I Ever. Let's review question by question. Check it:

"Never Have I Ever Hooked Up With A Fan On Tour"

Ellen brandishes the "I Have" sign for all to see, shrugging at the cheers, brushing them off with a "I'm being honest!" Drake's a little shadier. "What is a fan, anyway?" he quibbles "Someone who just enjoys, your, like—" He stops and recognizes he's being shady AF, admits defeat, and holds up the "I Have" sign to cheers. Meanwhile, Leto pulls a shady Never Have I Ever move ever (see above). Oh, you tease.

"Never Have I Ever Texted A Nude Selfie"

Jared Leto, you are SO SHADY. That's got to be a yes, right? Look at that cheeky little grin from behind the "I Have Never" sign.

"Never Have I Ever Made Out With Someone Twice My Age"

"Never Have I Ever Googled Myself"

In the immortal words of Ellen, "Why would you do that?" But, again, zero shame here for either Drake or Jared Leto. Color me impressed.

"The shame!" exclaims Leto afterwards. But at least he's playing the game properly, now. Still, when Ellen pushes him to go into more detail on it, he stays mum. Leto, you're a slippery customer.

"Never Have I Ever Had Something On My Body Waxed"

When Leto's the only one in the group to hold up the "I Have" sign, he's quick to mansplain it away: he had to have his whole body waxed for his role in The Dallas Buyers Club and to play Joker in upcoming film Suicide Squad. Drake's reaction is classic: nobody believes a word you say anymore, Mr. Leto.

Funny 'cause it's true. But check how Leto hangs on until Drake's sign is aloft before he joins him. You are one smooth criminal, Leto.

In summary, Drake is as honest as he's handsome and I was wrong, so wrong, to ever doubt him. Jared Leto, if I'm ever invited to play a game of doubles poker in Hollywood, you're pairing up with me, because you are unreadable and entirely mysterious.