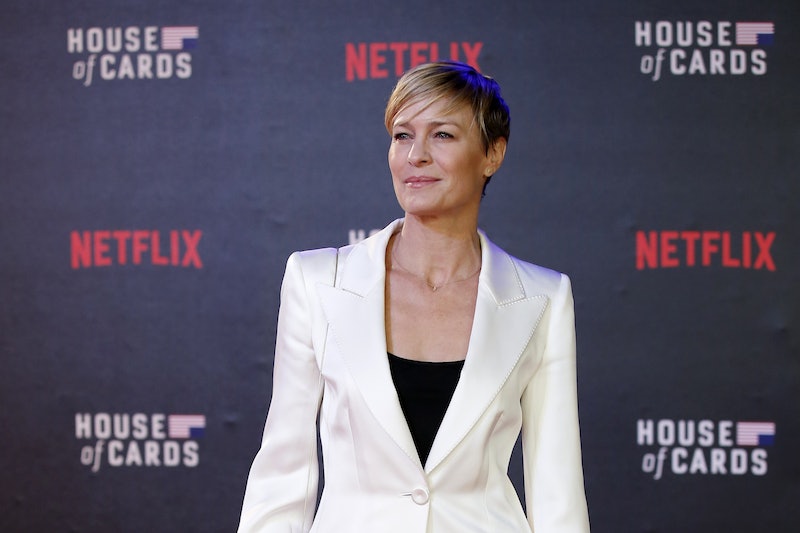 You know that saying, "art imitates life?" Well, I'm pretty sure it's never been as true as when Robin Wright allegedly demanded to be paid the same as Kevin Spacey on House of Cards , because, if it's true, it's a baller move straight out of Claire Underwood's playbook. Before I get super into this, let me say right up top that, yes, of course I wish it didn't have to be a "baller move" to ask to be treated equally to your male co-star. I wish that, in 2016, that wasn't something that I had to call out and stand up and applaud, but hey. Baby steps here.

In an interview on May 17 at the Rockefeller Foundation, Wright was asked about obstacles she's bumped up against as a woman in Hollywood, and she shared the story of how she claimed to have received the same salary as Spacey on House of Cards.

I was like, ‘I want to be paid the same as Kevin.' It was the perfect paradigm, [because] there are very few films or TV shows where the male, the patriarch, and the matriarch are equal. And they are in House of Cards. I was looking at the statistics and Claire Underwood’s character was more popular than [Frank’s] for a period of time. So I capitalized on it. I was like, ‘You better pay me or I’m going to go public.' And they did.

Bustle reached out to Netflix for response and were told they would not be commenting on the story.

This topic has been at the forefront of our minds for a little while now. The gender wage gap means that the average white woman makes 78 to 79 cents for every dollar earned by the average man (the gap is even greater for women of color). That distressing trend is reflected in Hollywood, as well, where women are frequently paid startlingly less than their male costars. Jennifer Lawrence, for instance, has written about the inherent unfairness of the gender wage gap, and she's also fought against it by reportedly demanding to earn $8 million more than Chris Pratt in their upcoming film Passengers . Which, hey, should be a no-brainer when you're strolling around with a literal Academy Award and four nominations chilling in your back pocket. But it isn't a no-brainer yet, and we still have a long road to walk before we arrive in a world in which actresses don't have to demand the pay they should already be receiving.

It's only a good thing that Wright is speaking up. The more we have these conversations in the public sphere instead of behind closed doors, the more transparent these pay negotiations will be. There's no shame in knowing your own worth and asking for what you want. And, at the end of the day, it's alleged situations like this one that prove that, if there ever is a match for Claire Underwood out there in terms of feminism and badassery, it's Robin Wright herself.

More like this
The 'Hocus Pocus' Sequel Finally Has A Release Date & It Makes Total Sense
By Shannon Barbour and Radhika Menon
9 Photos Of Margot Robbie & Ryan Gosling As Rollerblading Barbie & Ken
By Alyssa Lapid
What Does The Presley Family Think Of 'Elvis'?
By Arya Roshanian
Chris Hemsworth Joked That Baring His Butt In ‘Thor: Love And Thunder’ Was A “Dream”
By Brad Witter
Get Even More From Bustle — Sign Up For The Newsletter