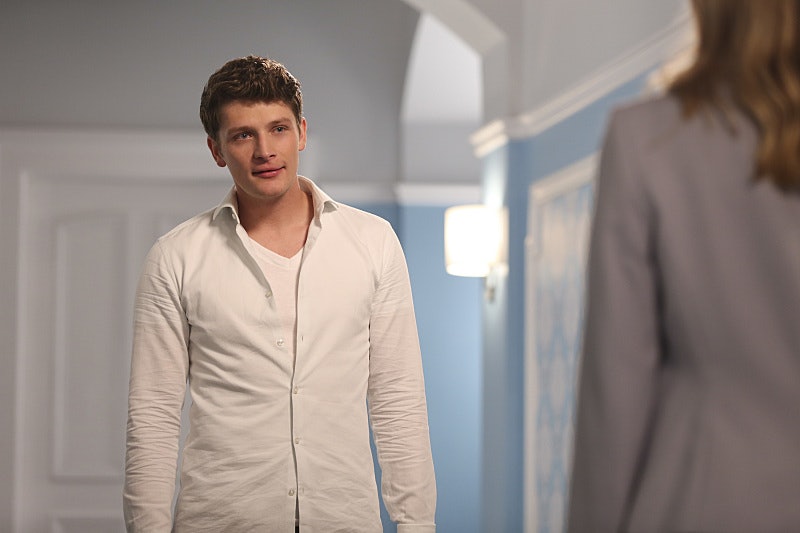 Fans may have known it was coming, but that didn't make watching Michael get shot in the Jane the Virgin finale any less difficult to endure. And even though we'll have to wait until next season to find out for sure if Jane's new husband will survive his injuries, Brett Dier tells Bustle via email that Michael will be part of Jane the Virgin Season 3, though maybe not in the capacity that we'd think. "Well.... I can reveal that we have 3 options," the actor tells Bustle.

Obviously, Option C would be the most preferable choice among viewers (especially in regards to Team Michael fans!), not to mention for Dier himself, who is just as heartbroken as we are to see Michael's wedded bliss come to such an abrupt and unfair halt, given how much he and Jane have already been through together this past season.

"I just remember feeling really weird [after reading the finale script] and also I felt bad for Michael," Dier shares. "I have been playing him for two and a half years and I just love and care for the guy." And he's not the only one. In fact, I bet watching Michael say his vows in Spanish to Jane may have converted even the most die-hard Jane and Rafael 'shippers to switch sides, which makes his unsure fate all the more stressful.

For now, Dier assures us that "I know just as much as you," which means anything could happen. However, even if Michael doesn't end up surviving, I suppose we can take solace in knowing that he will return in Season 3 in some capacity... even if it ends up being in a body bag.