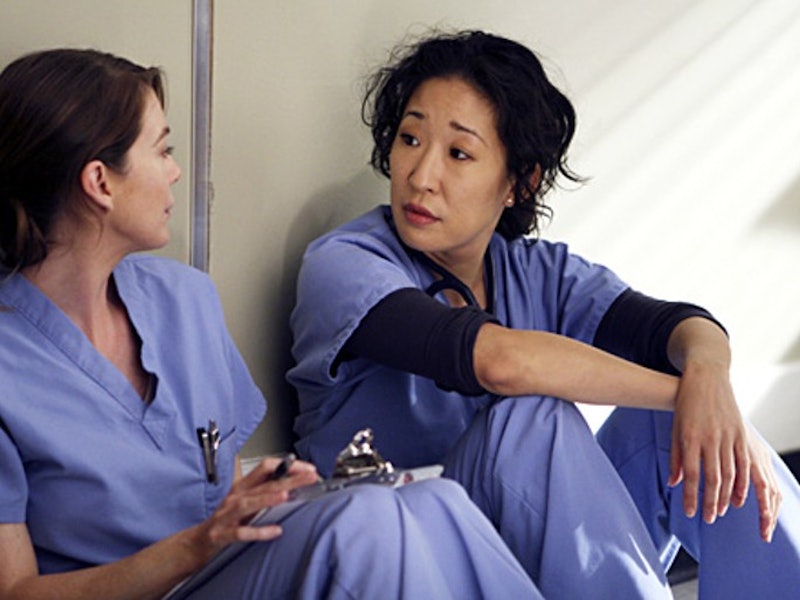 When you've been on the air as long as a show like Grey's Anatomy has, it's common to see a fair share of cast members come and go. But if there's one goodbye that's still left a huge hole in our hearts — one that not even these talented doctors could fix — it would have to be Sandra Oh's departure as the hardcore heart surgeon, Cristina Yang. Full of ambition and just as much sass, this character quickly became a fan favorite among viewers, and considering that her farewell (unlike so many others before her) wasn't a result of death, it's understandable why many viewers have remained hopeful that Cristina will eventually return to Grey's Anatomy at some point before the series takes its final bow.

ABC has officially renewed the Shonda Rhimes show for another season. (No surprises there.) So could this mean that lucky number Season 13 will be when Dr. Yang decides to grace us with her presence in the OR once more? Let's just say that Oh doesn't seem opposed to the idea. In fact, shortly after her big departure at the end of Season 10, the actress admitted to The Hollywood Reporter that she'd be up to coming back for the eventual series finale.

"I told [Rhimes], "If you guys want to finish it out however you want to finish it out, I'd be more than happy to come back. And if it doesn't fit in that way, I totally understand. I just want you to know that I'm available," Oh stated. But considering we have no idea if Season 13 will be the show's last, her involvement continues to remain unclear, though the fact that she still hangs out with members of the cast is enough to keep those rumor mills turning.

But even if Oh was coming back, I highly doubt she'd be able to confirm anything outright. (Don't forget that actors have a tendency to lie in order to protect their show from spoilers.) So it's up to us to try to read between the lines and figure out whether her coy remarks are actually hints of a pending return.

For example, while recently discussing her latest theatrical projects with the Los Angeles Times, the topic quickly turned to Oh's time on Grey's and whether or not the speculations are true regarding a possible return for her character prior to the series finale. "I love that there are rumors," Oh remarked. Now, is it just me or did she just totally dodge directly answering that question? I mean, that obviously wasn't a confirmation of anything... but at the same time it also wasn't an outright denial either. And at this point, I'll take any glimmer of hope I can get.

More like this
Ava DuVernay Thought The 'Queen Sugar' Series Finale Felt “Really Satisfying”
By Brad Witter
Will 'The Walking Dead' Return For Season 12?
By Grace Wehniainen
This 'White Lotus' Symbol Could Hint At A Major Character's Death
By Grace Wehniainen
The 'Firefly Lane' Book Ending Teases Way More Tears To Come In 2023
By K.W. Colyard
Get Even More From Bustle — Sign Up For The Newsletter