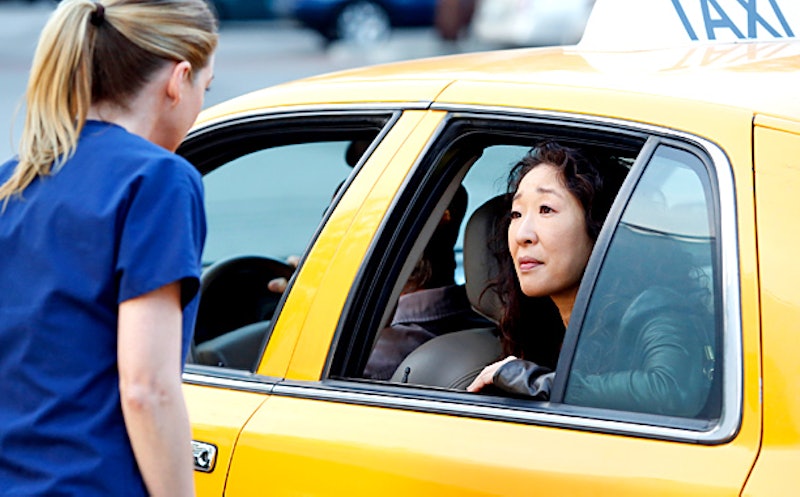 I can't for the life of me imagine what Grey's Anatomy Season 11 is going to look like without Cristina Yang. For a solid 10 years, Sandra Oh has been a staple of ABC's medical soap, and her character has been among the strongest, most compelling women on television. Heck, the identity of the show's nominal protagonist is completely wrapped up in her relationship with Cristina, so it's difficult to picture how Meredith will continue without her "person." So while it's exciting to see Grey's enter its second decade on air (!!!) and how the writers will handle Meredith and Derek's crumbling marriage, April and Jackson's pregnancy, and Richard's discovery of his long-lost love child, it's impossible not to wonder when if might see Cristina's face on Grey's Anatomy again.

Sure, Cristina moved to Switzerland to pursue a promising career at a shiny, well-funded facility. But does that really mean she won't have time to check in with her best friend every now and then? Is hearing her voice over the phone or seeing her face on Skype really so much to ask? Look, I'm not saying that Oh should cameo in every single episode — fans will never get over her loss if she keeps popping up every week. I understand that there has to be a separation period so that we can start moving on... but then I hope that Shonda Rhimes and Oh herself will leave the door open for some surprise appearances.

So when might we see her again? As of now, there's no return date set in stone, although you'll pleased to know that — unlike fellow departed cast member Katherine Heigl — Oh has nothing but compliments for the show and is completely open to guest starring in the future. In an interview with The Hollywood Reporter, Oh addressed the possibility of a return:

We talked about that when I told her I was going to leave but we haven't talked about it again. There are certain things that Shonda and I talk about once and then we leave it because we want things to happen without pressure. I told her, "If you guys want to finish it out however you want to finish it out, I'd be more than happy to come back. And if it doesn't fit in that way, I totally understand. I just want you to know that I'm available." Who knows! I might be doing something fabulous and it might not work out but I did say, "Yes, of course I would."

Rhimes herself seems just as eager to check in with Dr. Yang at least once more before Grey's finishes its run (whenever that may be): "I have already told Sandra that when she’s ready to come back to television, if she does not come to me first, I might have to hurt her," she said. Oh had equally passionate words for her showrunner: "If she didn’t ask me to come back for the series finale, I would hurt her."

While Oh will undoubtedly be busy pursuing other projects in the meantime, Cristina fans can rest easy knowing they likely haven't seen the last of their favorite heart surgeon.

And I'll go ahead and leave this here just in case you feel like having a good cry:

More like this
Ellen Pompeo Is Stepping Back From 'Grey Anatomy' For More Than Half Of Season 19
By Brad Witter and Sophia Moore
'Yellowjackets' Just Announced Who’s Playing Adult Van & It’s Perfect
By Gretchen Smail
At 14, D'Arcy Carden Was Sneaking Out To Parties & Crying Over Kurt Cobain
By Ivana Rihter
Josh Peck Shows Love To Jennette McCurdy After Her Shocking 'iCarly' Revelations
By Radhika Menon
Get Even More From Bustle — Sign Up For The Newsletter