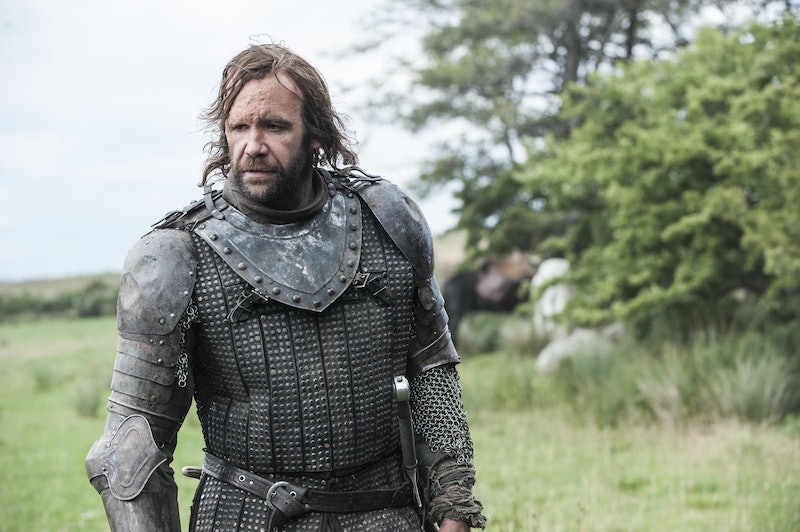 Part of being a Game of Thrones fan is the wild speculation as to what will happen next. Many fans who started the series and wanted to learn of what was to come dove into the A Song of Fire And Ice novels for clues to what would be happening next on the show. However, now that the show is starting to extend past the books in many ways, fans and book readers are allowed to theorize together on what the future holds for Westeros. While many theories revolve around answering questions of parentage, there is one theory that is inspired almost solely by the fact that it would be really cool if it happened. This theory is known by fans as Game of Thrones' own Cleganebowl.

Cleganebowl, simply put, is the fan term for a supposed showdown that could occur between Gregor "The Mountain" Clegane and Sandor "The Hound" Clegane in a trial by combat for the life or death of Cersei Lannister. These two brothers have beef as it is, as Gregor was often cruel to his younger brother Sandor — even being the blame for Sandor's facial burns. They've fought before onscreen, but not since Season 1, and Cleganebowl promises to be a spectacle on par with The Mountain's fight against Oberyn Martell. Cleganebowl isn't confirmed to be happening, no matter what fans say, as a lot of different factors need to line up to ensure that Cleganebowl can happen. What needs to line up for Cleganebowl to actually happen, and how likely is it?

The Mountain Has To Be Alive

The biggest issue with Cleganebowl is that both of the Brothers Clegane seemed to have met their fates in Season 4 of Game of Thrones. The Mountain was poisoned by Oberyn's blade, and The Hound was left for dead by Arya after being pushed off a cliff by Brienne of Tarth. The Mountain, however, was recently confirmed by Qyburn to be the true identity of Kingsguard Ser Robert Strong. Qyburn spent much of Season 5 doing some odd science experiments which resulted in the zombie-esque existence of Robert Strong. Cersei and Jamie also discussed how Robert Strong will be fighting for her in a trial by combat against The Sparrows for her crimes.

The Hound Has To Be Alive

The Hound being alive is a little trickier, but some clues in the book indicate that The Hound is not only alive but is now a reformed man of faith. There's a theory that an uncharacteristically large gravedigger seen with a religious group that Brienne visits, is secretly The Hound. Also, in an interview with BBC Breakfast, actor Ian McShane revealed that the character he will be playing on the show is an "ex-warrior who has become peacenik. I have this ... peaceful tribe who have brought back — I bring back a much-loved character everybody thinks is dead." It sounds like Ian McShane's character is awfully similar to what fans predict The Hound has become, perhaps these two are linked?

Why Does It Matter If These Two Fight?

Sure, Cleganebowl would be cool — but is that all there is to this theory? Just that it would be cool? Luckily, like most great Game of Thrones theories, there is an accompanying prophecy to give it some weight. In A Feast For Crows, Maggy The Queen's prophecy states that "when your tears have drowned you, the Valonqar shall wrap his hands about your pale white throat and choke the life from you." Valonqar means "little brother" in High Valyrian. While Cersei took this prophecy to believe that Tyrion Lannister will be the cause of Cersei's demise, fans beleive that Sandor Clegane, himself the little brother of Gregor Clegane, will be to blame for Cersei's downfall should he triumph in a trial by combat. This would fulfill Maggy's prophecy, which has already begun to come true in the for of Joffrey and Myrcella's deaths.

While it's not confirmed, the evidence seems to be stacking up in favor of Cleganebowl, which would carry the poetic weight that so many battles do in Game of Thrones. Besides, who else are the Sparrows going to ask to fight a gigantic pseudo-zombie than the zombie's little brother?