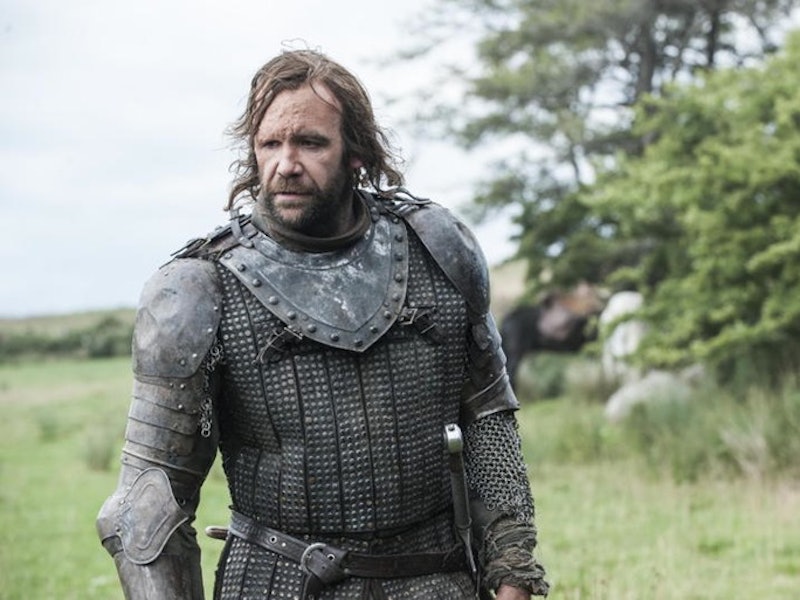 I cannot think of another show that generates as many fan theories as Game of Thrones does. From the ever popular L + R = J to the Battle of the Bastards, there are more theories in the realm than there are gods (and there are a lot of gods). One of the cooler Game of Thrones theories is the Cleganebowl. If you have not heard of it, the Cleganebowl refers to a potential battle between the Hound and his brother the Mountain, and it could just happen on Thrones Season 6.

The Mountain is currently Cersei's zombie protector and the first guy in line to fight for her in a trial by combat when the Faith calls for her to be judged (again). The theory goes the Faith will call a Clegane of their own to fight, Sandor "The Hound" Clegane. The Hound was last seen in Season 4 when a brutal battle with Brienne left him gravely injured. Arya chose not to put him out of his misery when he was dying, but his actual death was never witnessed onscreen. When it comes to Game of Thrones, if the body is not burned or buried, then the character probably isn't dead (I am looking at you, Jon Snow). In a world where reanimating the dead is an option, it is not so far-fetched to believe the Hound could make a triumphant return and finally defeat his brute of a brother.

The number one reason why the Hound's return is completely plausible comes from Season 6 guest star Ian McShane who revealed to BBC Breakfast that his small, but significant role would involve bringing a great character back from the dead. Said McShane, ""I bring back a much-loved character who everybody thinks is dead." Now that Jon is back among the living, there are only two characters McShane could be referring too: Lady Catelyn Stark or the Hound. As much as I would love to see the show finally introduce Lady Stoneheart, actor Michelle Fairley is super busy and she just joined Starz's The White Queen sequel, so that's unlikely.

That leaves the Hound, a character who is both beloved and has some unfinished business to attend to when it comes to his brother and the Lannisters. Film School Rejects points out a major point in favor of the Cleganebowl taking place in Season 6 — Episode 7 is titled "The Broken Man." Book readers will remember "The Broken Man" speech comes from A Feast for Crows when Brienne, Podrick, and Ser Hyle pause their search for Sansa long enough to take sanctuary at a monastery run by a man named Septon Meribald. At the monastery, Brienne observes a silent man who is larger than any other man there. Listen to the speech below and take note of the Septon's use of the word "hound."

The theory goes that the broken man in question is the Hound who was saved by Septon Meribald. If McShane is playing Meribald, then the title of Episode 7 is a huge clue that the beloved Hound will return for at least one more battle. If you need even more reason to hope then consider the theory's origins. An intrepid fan coined the term Cleganebowl on 4Chan in 2013, and they tied it to a prophecy that has been getting quite a few mentions on the show of late: the Valonqar theory.

Remember a crone told Cersei all of her children would die, and that a young queen would be her downfall. The key to theory is Cersei will die at the hands of the Valonqar, or "little brother." Cersei always assumed Tyrion was the little brother the prophecy was referring too, but the original Cleganebowl theory notes the Hound is also a little brother. If he is the champion for the Faith, then there is every chance that Episode 7 will turn this theory about an epic Clegane brothers showdown into a reality.