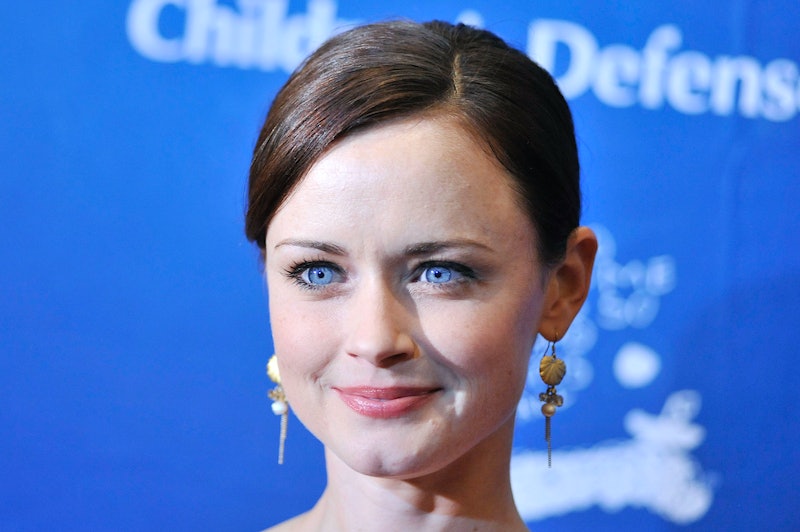 When it comes to keeping a secret Alexis Bledel and her husband Vincent Kartheiser are the reigning champs. In an interview with Glamour, Bledel's Gilmore Girls co-star Scott Patterson revealed Bledel and Kartheiser have a baby son, meaning Bledel managed to keep both her pregnancy and the birth of her little boy under wraps. Now that the world knows Rory Gilmore is a mom, though, it is impossible not to wonder what Bledel named her son. Did she get nostalgic for her awesome Gilmore Girls alter ego and name the little guy Rory? That's probably hoping for too much, but it would be so cool if it were true.

According to Patterson, the little Bledel-Kartheiser baby is about a year and a half younger than Patterson's toddler son, and he has been quick to share tips with his onscreen almost daughter. "We're comparing notes because my son is about a year and a half older than her young son," Patterson told Glamour. "I’m showing her photos and videos and what to expect." That's right, guys, Luke and Rory exchanged baby notes on the set of the Gilmore Girls revival. The world truly is a wonderful place.

Sadly, Patterson did not drop any hints about what Bledel's son's name is and the new parents have kept their bundle of joy's arrival so hush-hush it could be awhile before they share any details about their new little family. As exciting as it is knowing Bledel is now a mom, it is totally understandable she would want to keep her private life private, especially as she and Kartheiser settle into their new roles as mom and dad.

My inner Gilmore Girls junkie would love it if Bledel gave her son a Stars Hollow-inspired name. If not Rory, then perhaps Richard or Edward in honor of the late Edward Herrmann?

Of course, it is more likely she and Kartheiser chose a name that means something special to the both of them. Whatever their son's name is, the kid is sure to be totally adorable — I mean look at as his parents, he clearly has good genes.

What is important is Bledel and Kartheiser have a healthy little boy and are clearly enjoying their new family. Maybe they will reveal their son's name soon, but no one can fault them for wanting to keep their new baby all to themselves. Here's wishing them all the best, even though the reality of Rory Gilmore being a mom is sure to trigger more than a few existential crises.