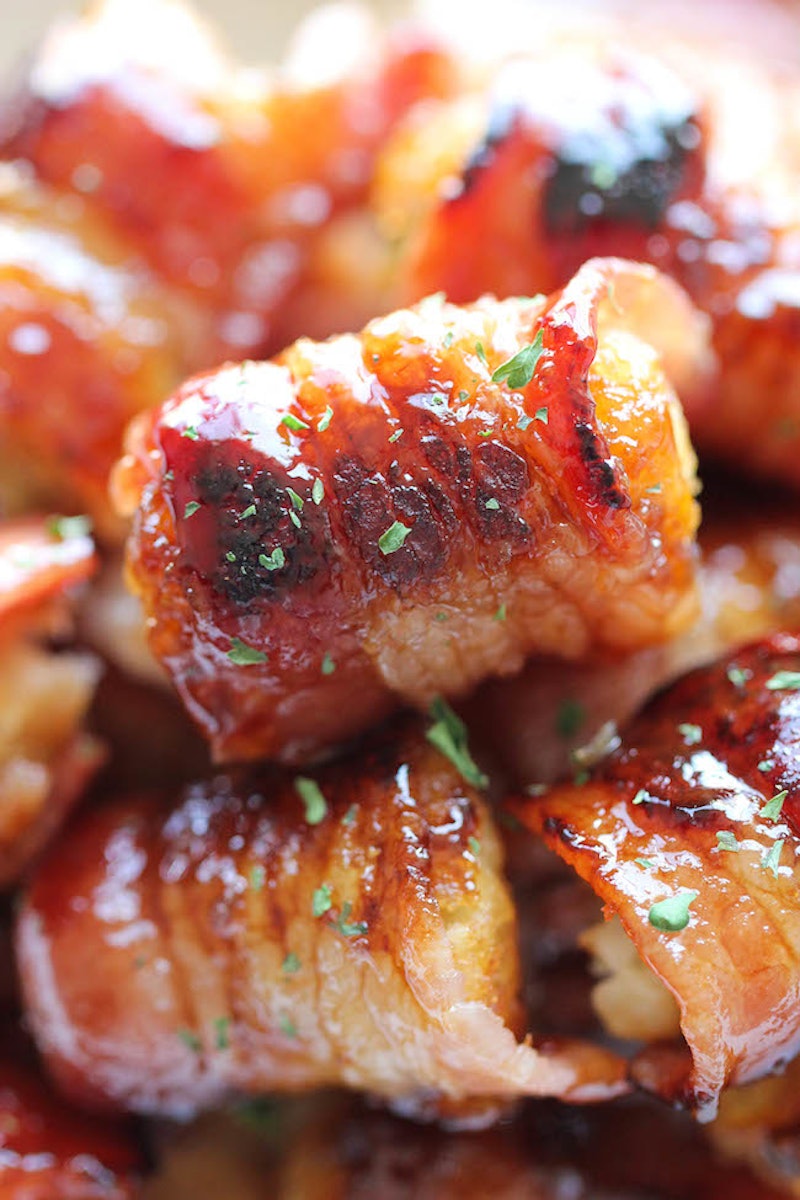 It's graduation season, and that means it's time to celebrate all of your hard work with the best graduation party food ever. Yep, I'm talking about bacon in all of its crispy, crunchy, salty glory. You just can't go wrong with this crowd-pleasing ingredient that is a key to making several iconic American dishes.

Whether you are a kitchen newbie or an experienced chef, this ingredient is your best friend when it comes to summer barbecues and graduation parties. Want to bring a dish that gets gobbled up immediately and leaves you feeling like an Iron Chef? Use bacon. You can wrap it around just about anything to create an indulgent, edible masterpiece that will have everyone asking for the recipe.

Maybe I am biased because I have worked in the restaurant industry for years and I have seen everything from bacon banana bread to bacon frosting, and I have tried and loved many a bacon creation. Because of my unceasing devotion to this crispy American staple, I have scoured the internet for delicious bacon-wrapped appetizers that will be the hit of any graduation party. After all, parties are great, but parties with bacon are even better. That's just a fact.

This classic finger food has been around forever, and for good reason. The simple recipe with caramelized brown sugar from Damn Delicious may have reached perfection. Feeling adventurous? Try the creative additions of pineapple and jalapeno from A Farm Girl's Dabbles.

Mochi is made from short grain sticky rice and on its own, it has a somewhat bland flavor. But if you wrap bacon around it and grill it like I Am a Food Blog recommends, you wind up with a crunchy, gooey, addictive appetizer.

This simple, sweet, and savory recipe from The Kitchn is an ideal last-minute dish that still seems elegant.

Do you have some extra carrots and asparagus in the fridge? Perfect! A Spicy Perspective has come up with a semi-healthy, bacon-wrapped veggie bundle with a cider maple syrup glaze for an extra kick.

Who can complain at a recipe that calls for three ingredients, 10 minutes of work, and produces crowd-pleasing results? What's Cooking Love came up with a recipe that will please kids and adults alike.

Here's one from the geniuses at The Kitchn that you probably haven't tried before: herbed goat cheese covered with pecans and bacon. Nom nom nom.

I have made this recipe dozens of times and it has never failed me. I first came across it as an alternative to the classic bacon-wrapped scallops, but I actually prefer the more cost-effective version with water chestnuts from Savory Sweet Life.

Why mess with a good thing? Offbeat + Inspired just took bacon to a whole new level without wrapping it around anything.

Damn Delicious knows how to do bacon right. Bacon, cheese, fried potatoes, and little to no active cooking time for you. Winning all around.

Toasted almonds add a nice roasted flavor to this traditional appetizer from The Kitchn. Plus, it can be prepared 24 hours in advance for no-stress party prep.

These little treats from Nom Nom Paleo are Whole 30 friendly, if you happen to be catering to that crowd, and could just as easily be considered dessert as an appetizer.

Surprise the bacon lover who thinks they have tried every bacon finger food with this recipe from A Spicy Perspective.

If these drool-worthy doughnuts from A Cozy Kitchen lasted more than five minutes at your graduation party, I would be surprised.

I don't think I need to convince you why you should try this epic dessert from I Am A Food Blog. Just do it, and you can thank me later.