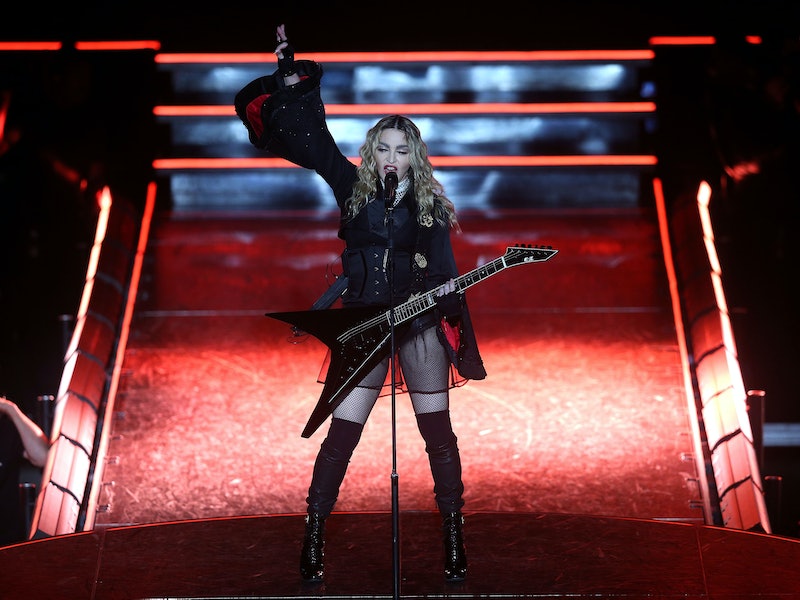 The Billboard Music Awards air live on Sunday, May 22, one month after the sudden death of Prince. The BBMAs celebrate popular music, so it seems inevitable that the ceremony would acknowledge the death of a unique, prolific artist in some way. Billboard announced last week that Madonna will honor Prince at the 2016 Billboard Music Awards and though the details of the performance "remain a closely-guarded secret," Madonna's involvement provoked a lot of strong opinions. Some Prince fans even started an online petition demanding that a different performer be chosen. Not everyone is a fan of Madge, but there's no denying that she and Prince had parallel careers in many ways, hitting the scene within a few years of each other, becoming icons of the earliest MTV generation, and reinventing themselves again and again. More than that, Madonna and Prince were long-time friends, and allegedly tried to be more.

Yes, you read that correctly. Madonna and Prince may have been the power couple that almost was. In Madonna: An Intimate Biography, J. Randy Taraborrelli claims that in 1985, Prince and Madonna were a thing. He claims that their first date was at one of Prince's concerts in Los Angeles; they gave the private after-party a show when they danced provocatively together on tables until 5 a.m. They allegedly saw each other off and on for two months, according to Taraborrelli, but "didn't seem to have much in common besides their status as super-star performers." Allegedly, the supposed affair cooled into a friendship when Prince proposed they become serious and Madonna took a step back, according to Taraborrelli. However, neither of the stars ever confirmed a romantic relationship and in 1985 People wrote, "Consider the way she deals in real life with her friend Prince, even as they are supposed to be (read: weren't, aren't, never considered) having an affair."

Though we may not know if they ever really dated, they definitely had a working relationship. Four years after they allegedly dated, Prince co-wrote and sang on the track "Love Song," from Madonna's Like A Prayer album.

That same year, Madonna spoke about Prince in the below interview, specifically about their working relationship. One of the ideas they pursued together and later scrapped was to co-write a musical. (I don't know what it would have sounded like or been about, but I do know the world is poorer for not having it.) In sharing her impressions of her fellow artist, Madonna seems to give an explanation why she and Prince didn't click. "You know, Prince has a very isolated life and I don't, and that is the big difference between us," she said.

Over the years, Prince and Madonna attended each other's concerts on occasion and mingled together at industry parties. Their relationship seemed playful and rivalrous, and thus was sometimes referred to as a "fued" in the press. When Madonna was in the front row of a Prince show in New York City, Billboard reports that Prince went on a pointed tangent about artists who lip-sync and that Madonna left "in a huff" and later chased down his limo with "her dancers in tow." Madonna, meanwhile, would poke fun at Prince's size, telling Rolling Stone of his lack of appetite on their first date, "I have this theory about people who don't eat. They annoy me."

In an Instagram post after Prince's death, Madonna's manager Guy Oseary broke a lot of hearts with the news that a co-headlining Prince and Madonna tour was once a possibility. Madonna had even picked out the name: the Royalty Tour. Prince was concerned about blowing too many minds, and postponed the double bill. "The world isn't ready for this, it's too big," Oseary remembers him saying.

As recently as fall of last year, Prince and Madonna were brought together again by music. After her Rebel Heart tour show in St. Paul, Madonna and her entourage hit a late-night Prince gig at his Paisley Park estate. Andrea Swenson, a reporter from Minnesota radio station The Current, was in attendance and reported that Madonna took a moment to say a private hello to Prince while her dancers got the party started. Once the gig began, Swenson writes, "I realized that she was not only in the front row, but had perched on the edge of the stage at Prince’s feet, looking up at him adoringly as he sang."

After his death, Madonna posted a throwback Instagram in memory of Prince, calling him a "visionary" and herself "devastated." Tune into the Billboard Music Awards on Sunday to see how her tribute continues.