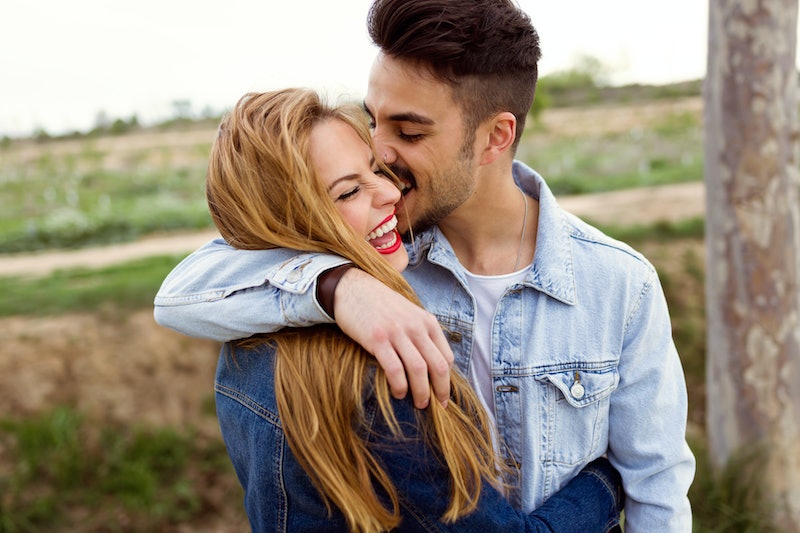 If you think that flirting is just a tool for meeting a partner, think again: Flirting when you’re in a long-term relationship is essential. For example, I was a friend’s house the other day and I glanced into the guest bedroom and caught her parents giggling and making out a little bit. They’re both in their forties but they’ve been married since they were 19, have a daughter in her twenties, and they still flirt and hug up on each other all the time. (This wasn’t the first time I’ve accidentally caught them being hella cute.) It was a moment that gave me serious hope for the future — and reinforced my belief that flirting shouldn’t stop when you stop being single.

While that couple is one of the more recent examples I’ve seen of long term couples flirting, they’re definitely not the only ones. My parents, who have been married for 30 years, flirt all time. My grandpa flirted with my grandma right up until she succumbed to dementia, more than 60 years after they married. And while my own relationship has yet to reach the impressive length that those relationships have, I flirt shamelessly with my boyfriend of three years with the hope that it will, some day.

Check Out: Flirt Fearlessly: The A to Z Guide to Getting Your Flirt On , $14, Amazon

Flirting, as Bustle writer Lea Rose Emery pointed out in her article about flirting, reinforces your long-term relationship by reminding what you love about your partner, keeps the romantic spark alive, and gets your subconscious brain thinking about sex. But how do you flirt when you’re in a long-term relationship? Try these nine things. But first, check out the latest episode of Bustle's Sex and Relationships podcast, I Want It That Way:

I tell my boyfriend he’s sexy every time I think it, which is approximately 456 times per day. I also tell him he’s smart and that I’m so impressed with the work that he does as often as possible. It’s a good reminder for me of why I love him and it’s also a good reminder for him that I think he’s awesome.

2. Compliment Them In Front Of Other People

Another thing I try to do is compliment my boyfriend in front of and to other people. So, for example, if he walks into a room that I’m already in, I might look up, turn to the person next to me, and say “Isn’t he so handsome?” It usually makes both of them a little bit embarrassed but it also makes my boyfriend feel good — and that’s the ultimate goal.

3. Get Dressed Up For Each Other

Go out every once in a while and get done up for each other! Nothing feels better than putting a little effort into hanging out with your SO, especially when they’re doing the same.

My boyfriend can make me laugh so hard that my face hurts. Joking with each other is a great way to flirt because it makes you both feel happy, obviously, and it’s also awesome for bonding. Just remember to make jokes together, not about each other because that kind can be mean and will have the opposite effect.

Is this just me? One of the times I feel most bonded with my boyfriend is when we get into really intense intellectual conversations. When it happens when we’re part of a bigger group — like at a bar with friends, for example — it feels like he and I are suddenly in a bubble together, throwing ideas back and forth, listening and disagreeing respectfully. For me, this is ultimate flirting.

Grab their butt! Or some other lovely, grab-able part of their body — if that’s something they’re OK with, of course. Personally, I’m a super physical person and take any opportunity to hug, kiss, and squeeze my boyfriend. When I’m feeling particularly flirty, I’ll give his butt a squeeze. Considering we both work from home, let’s just say it keeps things interesting.

7. Give A Little Kiss

A peck on the mouth or cheek or top of the head every once in a while is a great way to lightly flirt with your significant other.

Oh man, I’m the queen of the double eyebrow raising dirty joke and double entendre. Like a lot of flirting, this can feel silly at times — and it totally is — but the occasional joke about that banana your partner picked up in the supermarket will make you both chuckle. And probably roll your eyes — I promise.

I can not overemphasize the power of a good midday sext to get a your blood up when you're in a long-term relationship. Who doesn't like getting sexy pics of someone they love or reading what they're going to do to you when they get home? Sext it up!