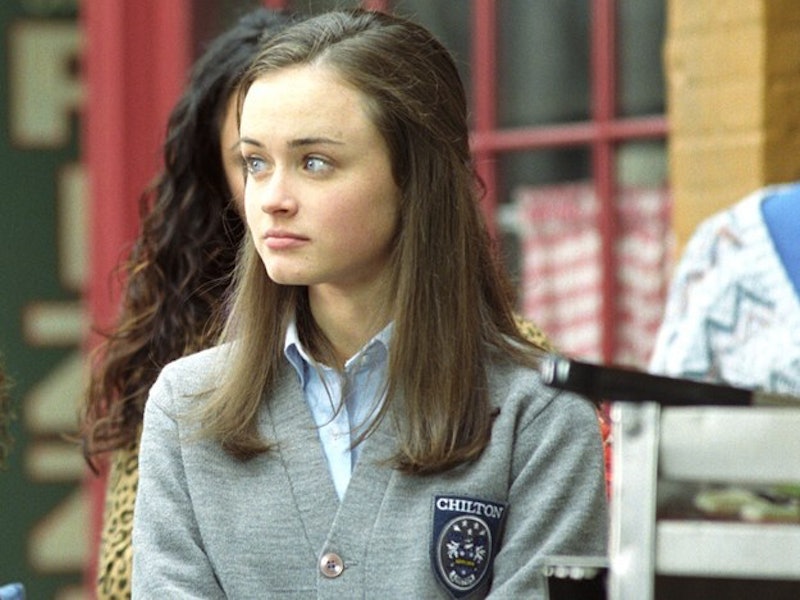 Alexis Bledel is pretty busy these days, and it's not just because of the Gilmore Girls revival. Apparently, she's the best secret keeper ever, because recently, Bledel had a baby and didn't tell anyone. So exciting! Last year, there were rumors that Bledel and husband Vincent Kartheiser were expecting, but those rumors were never confirmed... until this week, when Scott Patterson mentioned that Bledel is a mom in an interview with Glamour. So far, not too many details have been revealed about her little one — just that he's a boy and he exists. But even though this is Bledel's first child, being that the heart of Gilmore Girls was always about Rory and Lorelai's unique mom/kid relationship, I think the show has prepared her well for motherhood. In fact, I think it's safe to say that she's learned a lot of lessons through Rory that she'll be sure to pass on to her baby when he's older.

Let's be real for a second: As much as I adore all things Gilmore and the character of Rory, she was far from perfect — as we all are when we're stumbling through our teenage and college years. She's smart, ambitious, and kind, but she still made plenty of mistakes, so maybe Bledel's real life kiddo won't make those himself.

Here are just a few of those lessons. Maybe we're all better for learning from Rory's mistakes?

When we first met Paris when Rory started going to Chilton, I never would have guessed that they'd eventually become college roommates and best friends. It's a good idea to be open to a friendship with anyone, especially if that person turns out to be someone who motivates you to work harder and is loyal to a fault like Paris.

2. Don't Be Afraid To Change Your Mind

Rory had a huge crisis trying to decide between Harvard and Yale, and I thought it was both realistic and the right choice for her. Sure, Harvard was the goal, but Yale was way better suited to who Rory was as a high school senior entering college. Just because you've dreamed of something your whole life doesn't meant it's the best choice for you to make. Leave yourself room to change and grow!

3. Don't Let Anyone Else Drive Your Car

I love Jess and all, but what a nightmare! The first thing my parents told me when I bought my first car was to never let anyone else drive it, and it served me well. Unfortunately, Rory had to learn that lesson the hard way.

4. When Your Grandparents Want To Take You To Europe, Go

Not all of us are blessed with ridiculously rich grandparents. Why look a gift Emily Gilmore in the mouth?

5. And Let Your Rich Significant Other Treat You, Too

Don't get me wrong — you should totally be as independent as you choose to be in a relationship, and dating someone for money instead of love is probably the wrong thing to do. But if he loves you and wants to shower you with Birkin bags, there's no shame in that!

You will almost certainly end up in jail and probably end up with a lot worse than a few hundred hours of community service.

7. And Definitely Don't Trust Mitchum Huntzberger (or Anyone Like Him)

Anybody who tries to squash your dreams instead of encouraging you — or, at the very least, giving you actual constructive criticism — isn't worth changing the entire path of your life over.

8. When You're Offered An Awesome Job, Take It!

Rory thought she'd get the New York Times fellowship, so she turned down her job offer at the Providence Journal-Bulletin. She ended up not getting the fellowship, so she had a few scary days before she was offered a job following Obama on his campaign trail. However, that doesn't always happen outside of TV, so if you've never had a job in your chosen field before and one comes along, maybe just take it! You can always find something better later.

9. Your Mom Can Be Your Best Friend & Your Biggest Fan

It's hard to recreate a dynamic like Rory and Lorelai's in the real world, but I'm sure Bledel will have her own special relationship, too. Fingers crossed she eventually chooses to share some baby pics — I know this kid is gorgeous.