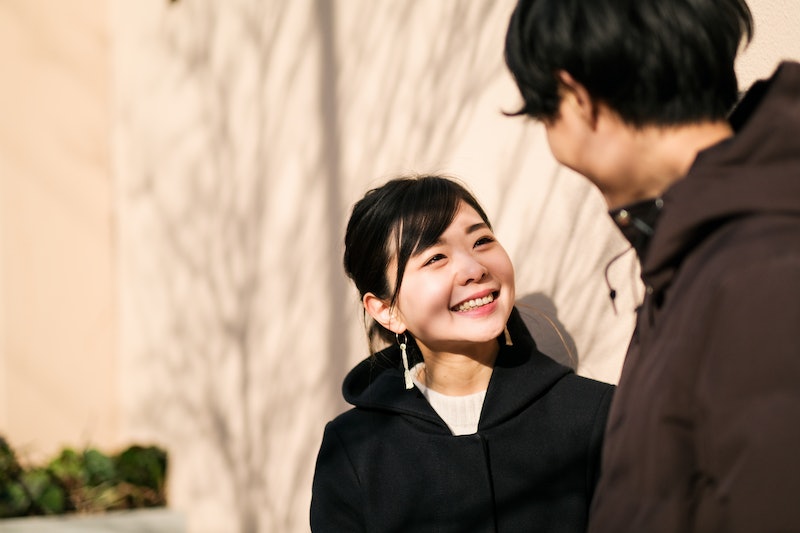 Isn't it the worst when you call someone by the wrong name? Not only is it embarrassing for both you and the other person, but it can make people feel unappreciated or forgotten. So why do we confuse people's names, anyway? It happens to me more often than I'd like to admit, especially when I'm chatting with family members or close friends. Certainly I know these people like I know the proverbial back of my hand, so what gives? And you don't even want to know how many times my mom "accidentally" called me our dog's name when she was looking for me in the grocery store. Oh, high school.

A new study led by Duke University professor and researcher David Rubin, which appears in the recent issue of Memory and Cognition online, investigates this exact question. The study analyzed the results of five surveys and encompasses responses from 1,700 participants — mostly undergraduate students and people recruited via Amazon's Mechanical Turk marketplace,The driving force behind the study was same curiosity we all have: Why does misnaming happen? And beyond the phenomenon itself, how does our brain choose which wrong name to use in a given moment? Is it entirely random, or is there an incorrect connection our brain makes on a consistent basis?

Explained Rubin in a statement, misnaming someone is "a cognitive mistake we make, which reveals something about who we consider to be in our group. ... It’s not just random.” Indeed, as Cari Romm writes over at Science Of Us, our mixing up of people's names is a sort of tic that tends to follow its own set of rules. So no, you aren't confusing your best friend's names because you're self-centered or dismissive. In fact, there are numerous factors at play in your brain, and none of them are because you aren't paying attention to the person standing in front of you (though, when you're on the receiving end, it can totally feel that way).

In short, recent studies show us that when we misname people, it's likely because we've mentally "grouped" them in with others who share a similar role in our lives; this causes us to associate the two people with each other, even if they aren't actually similar. Curious? Check out the research below for more explanations as to why this phenomenon happens:

1. We Confuse Names That Have Similar Beginnings And Endings

Studies find that people tend to confuse names that have similar beginnings and ends (which is why I'm often called "Melissa" instead of "Marissa"). This can also happen when names have a different structure but a similar ending, like the "y" at the end of "Ashley" and "Amy." For example, according to results from a survey published in PLOS One, participants whose names shared the first or or final sounds with a sibling shared that their parents accidentally called them by the wrong name more often than those without such name overlap. Interestingly, this happens less, on average, to first-born children, likely because their names were used more often and "cemented" first.

2. We Tend To Confuse Names With Similar Vowel Placement

Phonetic similarities play a role in our confusion of people's names. For example, names that have similar vowel placements (like "Tom" and "Todd") are easy to confuse. These moments are literal "slips of the lip" where you're used to using the name regularly or in the same situation, and because they sound similar, you slip up and revert to what's familiar to your mind and your ear.

3. We Confuse People Based On Their Group

This is probably the biggest revelation from Rubin's recent study: Apparently there is a connection between calling someone by the wrong name and what's happening in our heads. Basically, when we remember people, we categorize them in different relationships in our mental storage space — we all have a "family" group, a "close friends" group, a "roommates" group, and so on. These people could (and probably do) have all sorts of different personalities, physical appearances, and so forth, but the tie between them in our memory is how they relate to us specifically. Have you ever called your significant other by your ex's name without meaning to? As horribly as that tends to go for you in the moment, it actually makes a lot of sense: Your significant other is in the same "group" as your past partners in your brain.

And remember how my mom used to call me by our dog's name all the time? Interestingly, when it comes to our pets, they're often grouped into our family memory storage. Rubin's research shows that people place the family dog's name into their "family" group, just as they would with siblings, cousins, etc. This doesn't appear to happen with cats, however, which perhaps speaks to people's close bonds with their dogs. Thanks, Mom.

So remember, when your parents call you by your sibling's name, it isn't because they love your sibling more or wish you were more like your older sister (thankfully!). Instead, it's because your parents likely have your names stored in the same "group" in their mind, so when they recognize you, the other names are readily available at the same time. The same goes for your groups of friends, coworkers, and so forth. It's not that you're forgettable or unwanted, but rather that you're fitting into a group in someone's mind. Takes the sting out of repeatedly being called the wrong name, right?