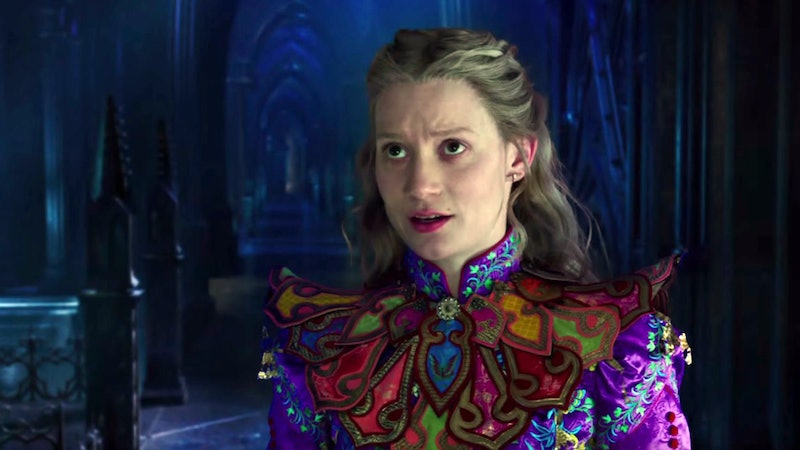 If you're an enormous fan of Alan Rickman's work and still can't get through Die Hard without losing your cool, you're probably having a hard time with the upcoming release of Alice Through The Looking Glass. The sequel to 2010's Alice In Wonderland is the last film Rickman made before passing away earlier this year, but fortunately for the Potterheads out there, Looking Glass reunites Rickman with several stars from the Harry Potter films. The Alice Through the Looking Glass cast is an eclectic mix of high-profile stars, and it's great to see so many Potter alum among them.

The film teams Rickman up with many costars from his Tim Burton work, too. While this Alice isn't directed by Burton, he is one of its producers and, judging from the cast, seemed to wield some major influence over who wound up in the movie. Even if you're new to this particular series, the actors and character voices should be super familiar to you, and you'll love seeing them all together on-screen. Get ready for some serious fangirling— the cast of Alice Through The Looking Glass is a total treat for fantasy nerds and bookworms alike.

Wasikowska might be in the mood for lighter fare following last year's Crimson Peak, which is where her return as Alice kicks in. After exploring the world around the high seas, Alice returns home to London and encounters the Caterpillar, who leads her to a magical looking glass that transports her back to wonderland.

Johnny Depp As The Mad Hatter

Depp reprises his role as the Mad Hatter in this movie. He's clearly committed to the part; Depp even showed up at Disneyland in early 2016 dressed in full costume.

Along with Depp, Bonham Carter is one of Rickman's past costars (they all starred in Sweeney Todd). The actor resurrects her Red Queen character for a second round in Alice.

Anne Hathaway As The White Queen

Hathaway also reprises a role from the original Alice, that of the White Queen.

A new addition to the series, Cohen stars as the half-human, half-clockwork, time-traveling character who warns Alice not to screw with time. Of course, she doesn't listen.

I will always remember this guy as the nasty roommate from Notting Hill that I liked better than Hugh Grant.

The Brit lends his voice to the twin characters, just like he did in the first film.

Stephen Fry As The Cheshire Cat

A man who wear multiple hats, Fry is the cat's meow in this role.

Michael Sheen As The White Rabbit

British, handsome, and capable of literally looking like a deer in the headlights? This is one heck of a casting choice.

Timothy Spall As The Blood Hound

The voice behind Dobby (see? So many Potter alum!) has a small part in this new movie.

Alan Rickman As The Caterpillar

BRB, just going to cry for a while.

With a cast like this, Alice Through The Looking Glass is going to be an absolute must-see.