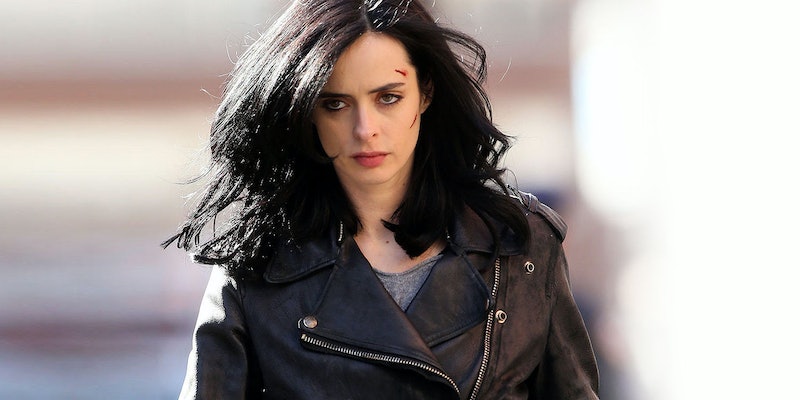 As of right now, Season 2 of Jessica Jones remains just as mysterious as its titular hero. Partially because Jessica Jones writers are penning the episodes right now, and partially because that's not how this works. Good things take time. (At least, that's what I tell myself to get through the day without any Jessica Jones info, but who knows.) None of this, however, is stopping the cast of Jessica Jones from sharing their ideas on what they would like to see go down in the show's sophomore season. The actress who plays P.I. badass Jessica, and her fellow co-stars, talked hopes and dreams for their characters with Entertainment Tonight, and I have to say, I'm on board with all of their ideas.

I mean, who would have a better sense of direction for where their characters should go in Season 2 than the actresses and actors who play them, right? One thing I'm particularly pining for is an expansion of the interpersonal relationships between the leads, and as it turns out, I'm not the only one. Krysten Ritter (Jessica Jones), Rachael Taylor (Trish Walker), and Mike Colter (Luke Cage) are all hoping for a continuation of what worked so well in the first season — that is, more relationship dynamics. Below, check out their thoughts.

Taylor has some opinions about where she would like to see her character Trish Walker — Jessica's best friend and right hand woman — develop. Though she didn't divulge any info about her comic book counterpart Hellcat, Taylor seems excited to get under the surface of Trish. The actress told ET, “I think there’s so many layers to this character. One of the things I’m really looking forward to, aside from all of the potential martial arts or athleticism, is seeing her relationship with her mother unfold a little bit more." Two things. One, potential martial arts and athleticism points to the possibility that Trish really could be getting a Hellcat storyline. (Please, say it's so.) And two, I second anything that lets us learn more about Trish's character, including insight into her own mother.

Taylor continued, "I had a really good time working with [...] Krysten and seeing their friendship unfold in different ways. There’s lots to play with.” This, perhaps, is the thing that gets me most amped for Season 2. The dynamic between Jessica and Trish was a rarity for female friendship on TV — honest, loyal, and complex. Can't wait to see how they push the limits of friendship with this pair.

As for our eponymous hero? She told ET, “[I’d love] to dig deeper into the psychology of the aftermath of Kilgrave, and maybe we could do a couple big stunts. I’d be down for that.” I'm thinking that both of these will be par for the course, but fingers crossed.

But, wait! What about what happens with Luke Cage? We can't forget about Luke Cage. Ritter told the publication what we're all already thinking. “I love me some Mike Colter. [Jessica and Luke] are so different, but they both have something kind of broken inside, and they identify with each other because of that. There’s just some magic that happens." The actress added, "I love their relationship. I loved it in the original comic books, in [comic series] Alias, and Mike’s a joy to work with. We had a lot of fun.” Colter seems to agree. He told ET, “Either you have it or you don’t...We’re on the same page, in a sense, we know that our chemistry makes our relationship work and it's important, so we go with it.” If we're reading between the lines here — which really doesn't take much — it seems like these two would like to see their characters keep whatever it is they have going on...on.

As for the storyline in general, ET did get one small piece of intel from showrunner Mellisa Rosenberg. Fans of Season 1 will be happy to know that the writers won't be fixing what isn't broken, if you know what I mean. “Jessica Jones, her journey is a very personal one, it’s very intimate. So, the guys coming in to take over the city, she doesn’t really care, she’s like ‘Take us down, I just need to pay my rent.’ Whatever we do, it will be personal to her. It will be a personal story.”