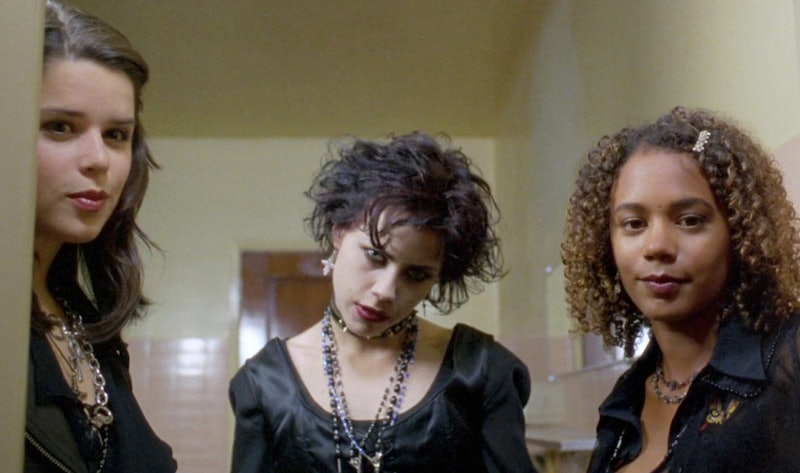 There were a lot of things to love about the ‘90s. Slap bracelets, scrunchies, Saved by the Bell... but the thing that I loved most about that beautiful decade was a little movie by the name of The Craft. And trust me when I saw that the film was worth my love and adoration, because there are a lot of reasons why The Craft is the best movie ever. Besides the fact that I used to (OK, fine, still do) watch it on repeat, and that it was a sleepover staple among all my friends, there were some really interesting things happening in that movie that made it so awesome. Things that, even now, sort of surprise me as an adult. Because this movie that I loved so much actually has some progressive moments working for it.

So besides just making a major dent in the number of spells I have memorized, this movie made a major dent in the way I — and everyone else who watched it repeatedly — grew up. Unlike the poppy, kitschy, campy movies that have been produced in the last few decades for teenagers, this movie really embraced some dark stuff and, by doing that, helped so many viewers wrestle with growing up and the tough things that comes with it.

But there are other reasons to love The Craft as much as I do. Just check out this list of reasons why The Craft is seriously the best movie ever.

A new girl comes to town, befriends the outcasts, gets revenge on the mean kids in school. It sounds like a familiar storyline, but this movie did it with magic. Literally.

2. It Taught Us All A Lesson About Inner Beauty

We all have something that makes us different. These girls were cool regardless of their outward appearances, because they were smart and they supported each other.

3. Light As A Feather, Stiff As A Board

He made middle school so much more bearable.

Yankee Candle is still your mecca.

6. It Was The One Scary Movie You Could Watch As A Kid

Even though it was rated R, no one’s parents seemed to mind the fact that you and your 12-year-old friends were watching a pretty terrifying movie.

8. It Launched So Many Movie Fads

Witches, wizards, vampires, and zombies all have this one little movie to thank for becoming so popular.

Sure, it’s no Avatar, but the fact that they pulled these stunts off in a ‘90s movie about witches made it a movie so many people could enjoy.

It seriously still gives me life.

11. It’s All About Female Empowerment

Don’t think they’re defeating that snake for nothing.

12. It Made Sleepovers So Much More Interesting

Prank calls and board games quickly turned into three hours of casting spells and seeing which boys seemed affected on Monday morning.

The original He Who Shall Not Be Named.

14. It Was A Battle Cry For Every Girl Who’s Ever Been Mistreated

Whether it was by a boy or by a mean girl, these girls enacted some serious revenge. And for those of us who had been ostracized in some way, it was incredible.

15. It Made Us All Feel A Little More Powerful

The fact that any one of us could perform magic was super empowering.

16. It Was The Start Of Christine Taylor’s Bald Schtick

One she would repeat in that infamous episode of Friends .

Never before have more pop culture stars been in one movie at once. At least not until Can’t Hardly Wait came out a few years later.

18. Each Of The Four Characters Were So Well Developed

Whether it was experiencing disfiguring scars or racial stereotypes, each of these women were complex and three-dimensional.

19. It Gave Voice To All Of That Teenage Angst You Were Feeling

20. It Was Sorta Environmentally Conscious

21. It Taught You French

All of those scenes in French class were good for more than just entertainment.

So many scoop necks and short skirts, I just want to live in it forever.

23. It Was An Encouraging Portrait Of Female Friendship

Well, until the end. Still! Four teenage girls supporting and loving each other in spite of their flaws? You don’t see that too often.

See what I mean? Who else is up for a re-watch right now?

More like this
'Friends' Star Maggie Wheeler Offers Support To Matthew Perry After Reading His Memoir
By Alyssa Lapid
Mel B Thinks These Celebs Should Play Them In A Spice Girls Movie
By Alyssa Lapid
The Banned 'Friends' Ad Shows Monica As You’ve Never Seen Her Before
By Sam Ramsden
Twitter Is Having A Field Day Over Mr Blobby’s Costume Selling For £62k
By Catharina Cheung
Get Even More From Bustle — Sign Up For The Newsletter
From hair trends to relationship advice, our daily newsletter has everything you need to sound like a person who’s on TikTok, even if you aren’t.