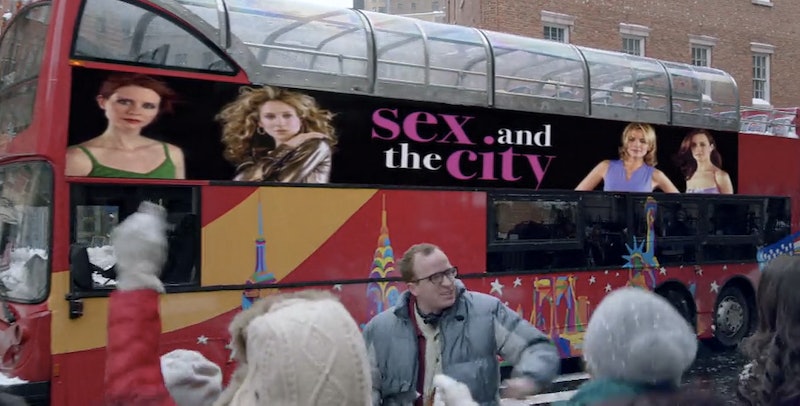 Amy Schumer pulls no punches when it comes to expressing truths about being a woman on her Comedy Central TV show Inside Amy Schumer. In Thursday night's episode, Schumer surprises her friend with tickets to one of those ubiquitous Sex & The City bus tours in NYC. Instead of being fun, the Sex & The City tour sketch on Inside Amy Schumer is spot-on commentary about how superficial the characters on the hit HBO series could be sometimes. Back in the early 2000s, Sex & The City was seen as highly progressive and unabashedly feminist.

But here, Schumer shows that viewpoint has slightly changed in 2016. On what turns out to be a discount $6 version of the bus tour, Schumer and her friend only visit locations frequented by Steve, the husband of show character Miranda Hobbes. The tour guide focuses on Steve, because he was a reliable, nice guy who really cared. Yet the full-price tour (for $12) passes them and viewers see it features pink feather boas, champagne, and includes visiting locations like "where Charlotte and her gay friend go shopping for blouses" and where Samantha had anal sex. It's a far more superficial interpretation of the HBO series.

And this is where the tour guide loses it. "Samantha was a one-note character," he shouts. "All she did was get f*cked all the time. Steve is the only character on the show with any layers. You turn to Steve when you need some laughs. You turn to Steve when you need some pathos." He even points out that Steve had cancer at one point in the show's run. This speech doesn't seem to convince the patrons of his discount tour, who point out that Samantha also had cancer.

Schumer's character is the only person on the tour bus who is totally psyched to see the Steve tour, mostly because she seems to be a fan of every bit of the show. And I think that's a separate parody of the people who are so loyal to Sex & The City that they appreciate all pieces of the show no matter what — even Steve.