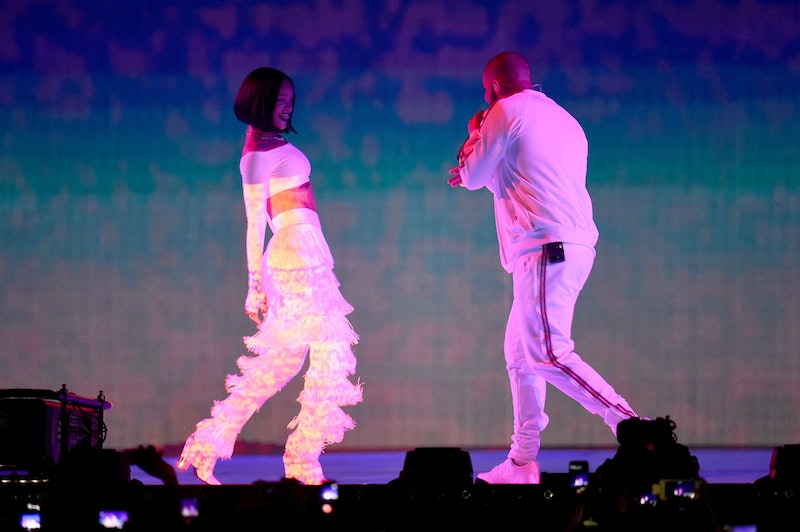 The never-ending musical love affair between Drake and Rihanna could have another chapter at the Billboard Music Awards on Sunday night. Rih is set to sing her new hit singles at the event, but will Drake perform with Rihanna at the Billboard Music Awards and set the stage aflame with their incredible chemistry? I think it's a distinct possibility that Drizzy will surprise everyone and join RiRi on stage, giving the world yet another classic moment between this non-couple for everyone to buzz about. Let's take a look at the facts.

Rihanna's hit song "Work" features Drake in the track, so if she performs it live on stage at the T-Mobile Arena in Las Vegas, she could use him for his verse to make the song more complete. How perfect would that be? And Drake will most likely be at the ceremony, since he's nominated in 10 categories including Top Artist, Top Male Artist, and Top Streaming Song for "Hotline Bling." He also has his new hit album Views to promote and what awesome timing would it be for him to give a surprise performance at the Billboard Music Awards? Plus, Rihanna also makes a guest appearance on his album in the track "Too Good," so maybe they can turn the performance into a double duet (I can dream, can't I?).

Then there's the fact that these two have made surprise appearances during each other's performances before, so there's precedent. If it has happened once before, it could very well happen again (and again).

Check out their past unexpected duets below.

During Rihanna's Miami stop, she brought out Drake for her song "Work." If that wasn't enough to make fans crazy, the non-couple dances all over each other, getting super close and twerk-y.

Can Drake's surprise drop-ins on Rihanna's tour even be considered surprises anymore? They seem to happen a lot. Here, it happens in Drake's hometown in Canada.

During this "surprise" guest appearance, Drake gives the crowd a taste of his own tracks "Jumpman" and "One Dance." Did the audience mind? Not at all.

Drake dropped by Ri's performance of "Work" at the award show back in February and danced very intimately. It once again ignited speculation of their romantic relationship.

Back in 2014, Drake brought out his No. 1 gal for an unexpected duet of their hit song "Take Care." The audience cheered and sang along, sounding like they loved every second of it.

Okay, not really. But Drake did bust out a pretty great Rihanna impression with a wig and all when he hosted the show earlier this month, so that's got to count for something here, right?

I'd say there's a high possibility that fans will see more sparks fly between Drake and Rihanna at the Billboard Music Awards. Turn on your A/C for the performance, because if it does happen, it'll be steamy.