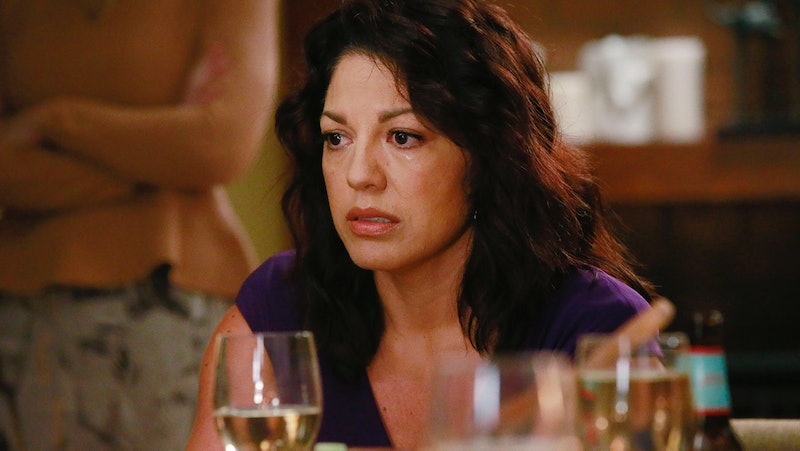 In a show full of strong, charismatic, and inspiring female characters, Carrie Torres has remained one of Grey's Anatomy's finest characters for the past 10 wonderful years that her character has starred in the show. So it's with great sadness that fans are left to deal with the fact that the character is departing the show, and I'm sure I'm not the only one wondering why Sara Ramirez is leaving Grey's Anatomy . In a statement given to US Magazine on Thursday (following the emotional Grey's Anatomy season 12 finale), Ramirez revealed her reason for leaving, and it's far simpler that we'd expect:

"I'm deeply grateful to have spent the last 10 years with my family at Grey's Anatomy and ABC, but for now I'm taking some welcome time off ... Shonda's been so incredible to work for, and we will definitely continue our conversations! I send my love to Ellen [Pompeo], the rest of the cast and crew, and I look forward to always being a part of the Shondaland family!"

Ten years is a long time to spend working in any one job, but especially in the demands of a network show which manages to deliver 24 episodes a season. As a result, it sounds as though Ramirez is looking forward to just enjoying a break from acting and some well deserved down time. We can hardly blame her for wanting to chill out for a while and enjoy her life.

It's also a wonderfully positive reason for Ramirez to depart the show, with no signs of animosity behind the scenes being to blame for her decision. In fact, the case appears to be quite the opposite, with the actress gushing about her love for the Grey's Anatomy team. Likewise, it's a sentiment shared by Grey's Anatomy creator Shonda Rhimes who also issued a beautiful statement in praise of Ramirez' talents and wishing her luck for the future:

"Dr. Callie Torres came into our lives dancing it out in her underwear almost a decade ago, and I could not be happier or more proud of her journey ... Sara Ramirez's performance inspired me as well as millions of fans each week. We wish her the best on her well-deserved time off. I will miss Callie tremendously, but am excited for what the future holds for Sara. She will always have a home at Shondaland."

I'm totally not crying right now. OK, maybe a little. Fans were already speculating that the actress may have been leaving the show prior to Ramirez' official announcement after one of her tweets at the end of April seemed to suggest an end of season "wrap" which sounded more monumental than usual:

Knowing how much Grey's Anatomy seem to love to kill off major characters in the most heartbreaking manners possible, let's all just be thankful that Dr Torres simply moved to New York in the Season 12 finale and didn't suffer the same fates as some of our favorite fictional doctors ever.