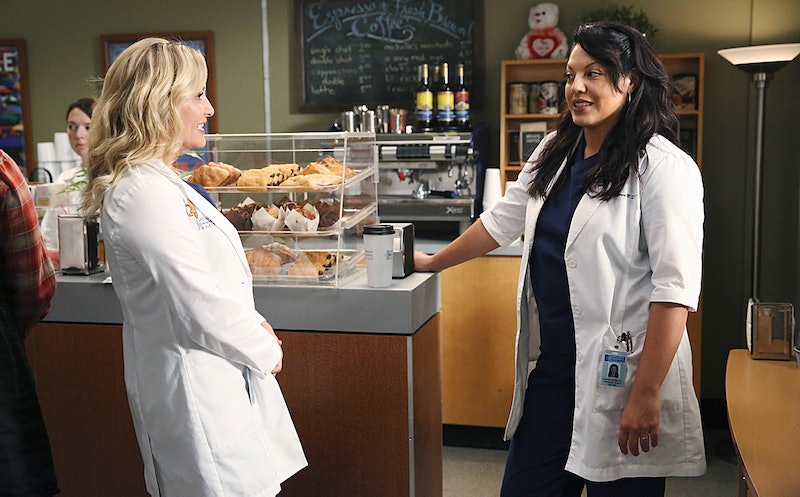 Grey Sloan Memorial Hospital has lost a lot of doctors over the years, but that's pretty much par for the course for a long-running medical soap. Over the past 12 years, beloved characters on ABC's Grey's Anatomy have been shot, hit by trucks, died in plane crashes, and moved to Switzerland. It's actually a something of a miracle that, over a decade later, there are still four of the original cast members left. But the fandom was sent into a tizzy this Thursday when news broke that one of the show's longest-running characters might be checking out for good. Is it true? Is Callie leaving Grey's Anatomy?

Update: On Thursday, May 19, Sara Ramirez released a statement to US Weekly in which she confirmed that she would be departing the show. "I'm deeply grateful to have spent the last 10 years with my family at Grey's Anatomy and ABC, but for now I'm taking some welcome time off. Shonda's been so incredible to work for, and we will definitely continue our conversations! I send my love to Ellen [Pompeo], the rest of the cast and crew, and I look forward to always being a part of the Shondaland family!" Shonda Rhimes also added, "I will miss Callie tremendously, but am excited for what the future holds for Sara. She will always have a home at Shondaland."

Earlier: The speculation over Dr. Torres' sudden departure began when actress Sara Ramirez sent out a tweet stating, "That's a wrap," and thanking everyone "for an enriching and unforgettable rollercoaster ride." It's easy to see how this could cause fans to panic: Ramirez's contract is up for negotiation this season, her character arc over the past few episodes has been about an impending move to New York City with girlfriend Penny, and the tweet certainly does sound like it could have been sent by someone saying goodbye to the show for good.

So what's the deal? Should we all be in full meltdown mode? After all, other than Meredith, Alex, Bailey, and Richard, Callie is the character who has been on the show the longest, first appearing midway through Season 2. Her departure would be the third in a row in the past three seasons, after Derek last year and Cristina the year before that. It's hard to imagine Grey's Anatomy without Callie Torres.

Well, we probably won't have to anytime soon. No spokesperson from ABC or personal rep for Ramirez have spoken out to either confirm or deny her status, but there are still plenty of clues that this isn't goodbye for Callie. First of all, notice the hashtag she used (#Season13); either Ramirez doesn't even know what season she herself just finished filming, or she's already looking forward to continuing with the show next year.

Second, while it's true that Ramirez's current contract expires after Season 12, that doesn't necessarily mean the actress is done. Entertainment Weekly quotes an "insider" as having "confirmed" that "Ramirez’s contract, while up in June, may be renewed." And according to Variety, "a source cautions that Ramirez’s tweet is not necessarily a red flag — she could simply be celebrating wrapping the current twelfth season."

But perhaps most telling of all is the fact that this isn't even the first time Ramirez has posted a cryptic farewell tweet that sent fans into a tailspin of despair. Almost the exact same thing happened two years ago when the actress finished filming Season 10 — which, coincidentally (or not), is also the last time her contract was up for renegotiation.

Until we receive official word from either ABC or Ramirez herself, I would say that there's absolutely no reason to panic. Knowing that Ramirez's contract was expiring, Shonda Rhimes may have written the New York City arc into Season 12 to give herself an easy out in case the actresses decided not to renew. But, as of now, there's no indication that that's the way things are going to play out. Maybe Callie will decide not to follow Penny to Manhattan after all; maybe she'll go and Season 13 will pick up after a small time jump, with Callie back in Seattle. There are plenty of ways to keep Callie around Grey Sloan for another couple of years.

And even if this is the end of the road for Callie, at least her fans can rest easy that she left the show alive and happy — rather than under the wheels of a bus or in a fiery explosion or some other fatal mishap.