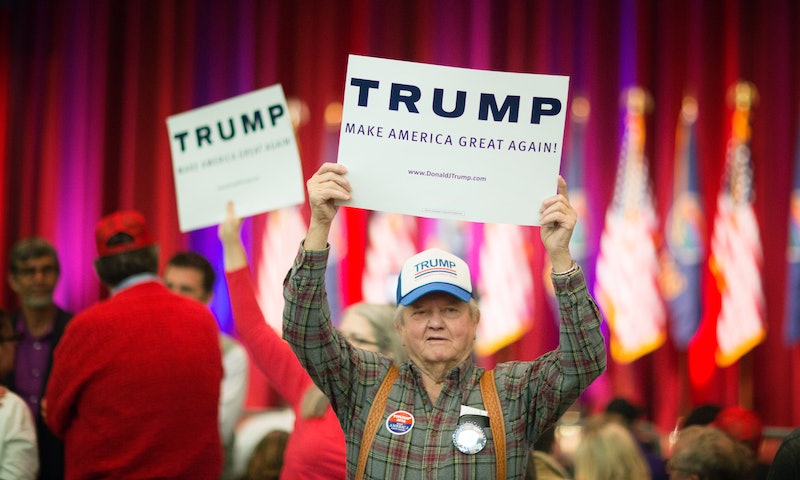 Donald Trump said he wanted to Make America Great Again. Then, the Democratic Party released a hat that said, "America Is Already Great." But it was a Staten Island woman who got it right when she wore a hat that said, "America Was Never Great." Krystal Lake, a 22-year-old Bernie Sanders supporter, wore the hat to work on Sunday. Subsequently, a picture of her began circulating online, and Lake said she received negative messages and even death threats on social media. But unlike the people sending her these threats, Lake has demonstrated an understanding of the intersectional ways in which marginalization operates.

Lake told The New York Times that she wore the hat because she was tired of hearing Trump's messaging, and because she likes "being different." In an interview with the Staten Island Advance, she elaborated on why she felt the need to wear the hat and visibly oppose Trump:

I see a lot of people, especially on Staten Island, that support [Trump] and don't look at the minorities or people in different situations that aren't as pronounced in the media, so I feel like Trump caters to one type of group of people and disregards everyone else.

Again, she's right: Trump would probably be a lot happier with a country that openly condoned his racism and sexism, as it might once have done. But wait — many people in this country do still condone this behavior. However, of all the threats and negative messages Lake has received, one stands out, to which she felt the need to respond: "I don't hate America. I'm not an anti-American. I just wanted to put my input on something that can make America better and having Trump as a president definitely wouldn't make it better."

The amount of faith we put into our institutions — and the amount of power we let them hold — should alarm us. Lake was critical of the United States and was subsequently accused of being anti-American. I don't buy into patriotism and nationalism in the first place, but if someone chooses to be openly critical of a country, isn't that proof that they would like to improve it rather than remain idle as injustice continues? The fact that Lake's hat went viral is valuable, because perhaps more people will challenge the assumption that America was ever great to begin with.

Lake told The New York Times that she was set to graduate from the College of Staten Island in two weeks, with a degree in media studies. If we're all lucky, she'll get to do what Trump is trying to prevent: increase representation of marginalized voices in the public sphere and work to combat bigotry.