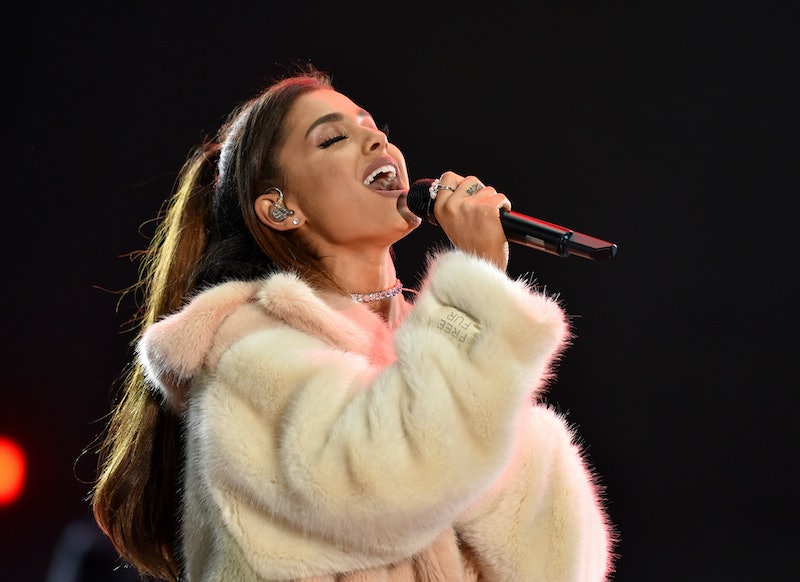 If you have been humming "Sometimes" all day, trust me, you are not alone. Ariana Grande's gorgeous love song is ridiculously catchy, but it is also driving fans a little bonkers. Who is singing with Grande on "Sometimes"? Those la-las are not singing themselves, people. The trouble is, no one is credited with Grande on the track. Clearly, this is the greatest mystery of our times.

Bustle has reached out to Grande's team, but so far they are keeping mum on who is singing with Grande. Meanwhile, the Twitter verse is losing its mind over the man with the flawless la-las, whoever he may be. The leading theory is Grande had her boyfriend Ricky Alvarez join her on the track. Alvarez is a backup dancer who accompanies Grande on tour, which means he would be available to join her onstage when she performs the song. The catch is, it is currently not known if Alvarez is a singer. Granted, you just have to be able to carry a tune to provide synchronized la-las, but the man on the track appears to have a strong voice, even though he never sings a full word. Interestingly, Alvarez is unabashedly excited for the Dangerous Woman release. Is it just because he is super proud of Grande or because he had a hand in creating one of the songs?

If Grande and Alvarez did not tackle "Sometimes" together, Grande could have enlisted one of her famous friends for an uncredited cameo. The number one suspect is Lil' Wayne who sings with Grande on "Let Me Love You." Perhaps the rapper stuck around to assist Grande on the softer "Sometimes." Lil Wayne is not known for his gentle love songs, so it makes sense he wouldn't be credited.

Another possibility is Grande's ex, Nathan Sykes. The two have maintained a positive working relationship, as evidenced by Grande joining Sykes on his song "Over and Over Again." The two have been proven to make beautiful music together, and since she joined him on a track, perhaps Sykes decided to return the favor.

For now, fans are going to have to continue to speculate about who the lucky man who contributed the la-las to "Sometimes" is. This mystery may be maddening, but the song is so soothing all you have to do is queue it up to forget all your worries. Listen to the song below and see if you can figure out who Grande is singing with — not that you need an excuse to listen to "Sometimes" again.