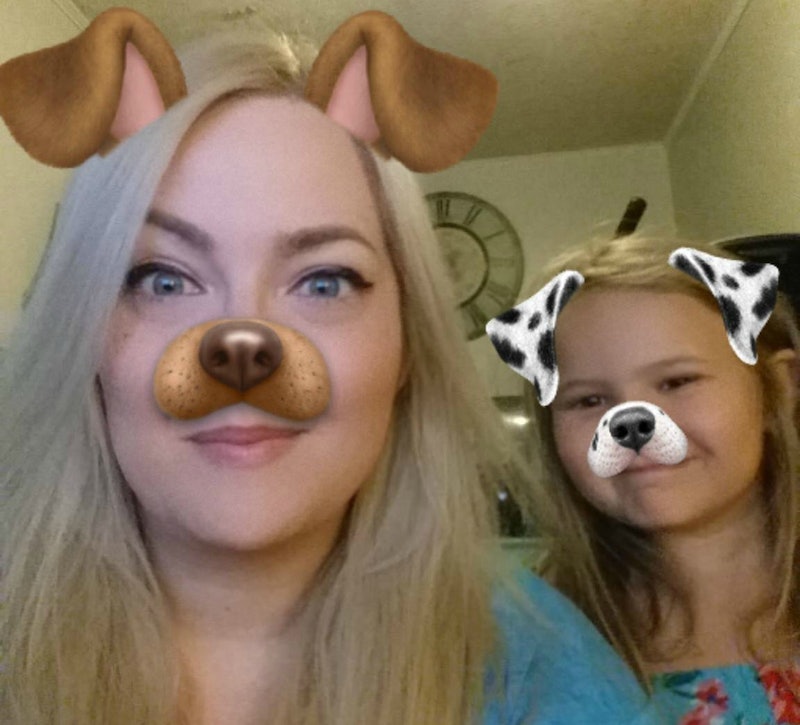 Every time a Snapchat update drops with new lenses and filters, the entire world seems to stop what they are doing to assume the form of a zombie or to capture snaps of themselves puking rainbows. And today — perhaps thanks to Kim Kardashian, although that theory hasn't been proven beyond a doubt yet — we're all whiling away our afternoon with selfies because, hey-oh, there's a new Snapchat filter. So here's how to get the Snapchat Dalmatian lens, because I know you're all dying to turn you and/or one of your friends into an adorable spotted dog.

But first, a bit of backstory. Last week, that most prolific of celebrity Snapchatters, Kim K, expressed her boredom with the current crop of filters. In her snap story, she suggested that Snapchat step up their game with some other breed options for their dog filter. The Twitterverse quickly picked up the request and ran with it, really driving home Kardashian's request for "like a Dalmatian or something." And because the world is apparently one great magic genie lamp granting all of Kimmie K's wishes, Snapchat soon after released an update to its classic doggy filter. If every dog has its day, this is quite literally that day for the Kardashian-inspired Dalmatian filter.

By now you're probably itching to give this new filter a go, so here's what you need to know in order to get the Snapchat Dalmatian lens.

1. It's Essentially The Same Song And Dance...

The new Dalmatian lens is not unlike the regular dog lens in that you simply open the app, tap and hold your face to open up the lenses, and scroll over to the OG dog option in order to access it.

The Dalmatian part of the lens will only work if you have a friend in the frame with you when you first snap your picture. (I chose my 5-year-old, Marlow, and my 3-year-old, Bowen). Fortunately, in the absence of any actual human companionship, you can use any inanimate object as long as it has a face. Like a magazine cover. Or a Magic Troll doll.

Here's where your pal comes into play. After Snapchat has done its digital mapping of your face and you've chosen the regular ol' brown dog filter, your friend will need to move in close enough so their face is fully in the frame. Sometimes it takes a few seconds for the filter to recognize your friend, but when it does — voilà! — your buddy will sprout Dalmatian features.

This will flash across the screen when the lens first fires up, and you're going to want to listen. Why? It enables the most fun part of the feature: the tongue lick. It's notoriously hard to catch via screen capture, but trust me when I say it's hilarious.