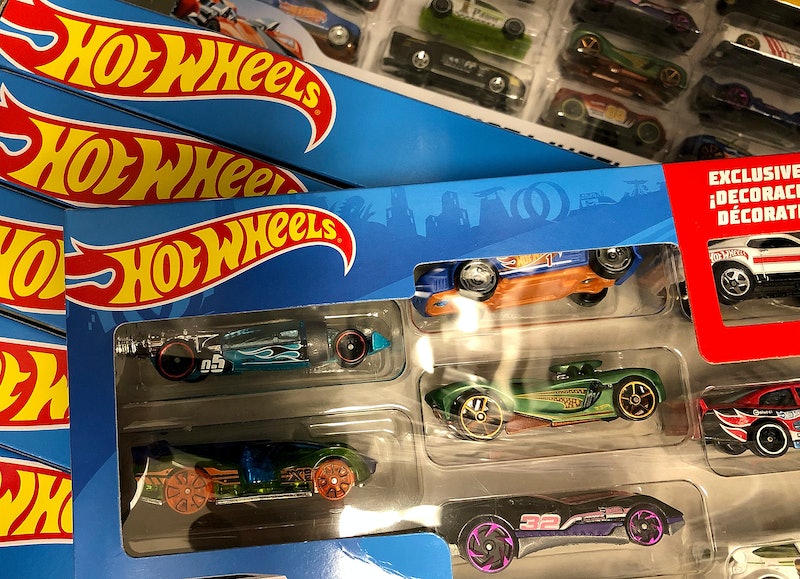 Many of our favorite childhood playthings, we remember for years to come. Others, though? No matter how much we may have adored them when we were young, somehow they just don't manage to stick around in our minds... until we encounter something that jogs our memories. Such is the case with these ‘90s toys you probably forgot about — or at least, ‘90s toys I definitely forgot about. I stumbled upon an image of one of them the other day, and you guys? So much nostalgia. So much. Seriously.

After I found that first one (which, incidentally, is also the first item on this list), I ended up heading down the proverbial rabbit hole and wandering into a land of once beloved, yet somehow forgotten toys. I’m not entirely sure why my memories of these toys had become so dusty and neglected; maybe it was because I was so very young when I played with them, or maybe it was because I only played with them when I was over at friends’ houses, or maybe it was something else entirely. Either way, though, even though it had been decades since I’d thought about them, my memories of them all came rushing back the moment I spotted them.

So I figured I would share the fruits of my labor with you, Gentle Readers. Since we’ve already gone over a specific subset of toys we all probably forgot about — dolls — there won’t be too many of those suckers on this list. Anything else, though? That was fair game. Ready for a blast from the past?

Most of us remember (and probably still have a soft spot for) Creepy Crawlers, which allowed us to bake our very own fake bugs and go scare our siblings with them. But there was also — as is so frequently the case, because hi, unnecessary gendering of toys — a corresponding version of the toy marketed towards girls: Treasures ‘N Trinkets, which used the same basic set-up to create jewelry instead of bugs. But although Treasures ‘N Trinkets had its heyday in the early-to-mid-‘90s, it didn’t have the staying power Creepy Crawlers.

Patti-Goop.com has a whole bunch of images of vintage Treasures ‘N Trinkets sets, so head on over there for a closer look — and if you’re really dedicated, you can still find the sets from time to time on eBay.

First introduced in 1992, Forbidden Bridge was (as described by Board Game Geek) a “motorized adventure game in which explorers attempt to bring back gems from a lost civilization.” I was all about motorized toys when I was a kid, so I can’t believe I really forgot about this one… and yet somehow, I did. The memory is a funny thing, isn’t it?

As was the case for many toys from the ‘80s and ‘90s, Pooch Patrol’s draw lay in their transformative powers. But while it’s true that they might not have been as flashy as actual Transformers, they were still kind of adorable: If you ever get scared, all you had to do was flip down their eyebrows and turn up their lips, and you had a fearsome guard dog to protect you. Awwww.

Because let’s face it: We all wanted a toy horse that walked on its own steam. Who cared if the remote control was connected to the dang thing with a wire? Starlight could really move, too — here she is in action:

Produced by Kenner from 1994 to 1995, Secret Keepins were one of the many, many gimmicky stuffed animals on the market. What made these little guys equal parts awesome and kind of creepy was the fact that you could unlock their stomachs and store stuff in there. When you first opened up a brand new Secret Keepin, you were rewarded with a charm bracelet — but it was possible to stash all manner of things in their lockable bellies.

I. Loved. Popples. I love them so, so much it’s not even funny. (Actually, it probably is. I may as well just own up to it; my adoration of my Popples collection was nothing short of hilarious.) Technically they’re not a ‘90s toy; they were manufactured by Mattel between 1986 and 1988. I continued to obsess over them long after the fact, though. Between the two of us, my brother and I had one that turned into a soccer ball, one that turned into a cheerleading pompom (complete with streamers), and several that turned into flowers. They were awesome. I still miss them, and the television show that went along with them.

Apparently the television show saw a revival in 2015 thanks to Netflix, though, so hey! Welcome back, Popples!

OK, maybe I should have called this post “15 ‘80s And ‘90s Toys You Totally Forgot About,” because apparently these guys — which I remember vividly snuggling with as a small child — are also from the ‘80s. They were produced by Fisher Price, and they were appealing for two reasons: They were completely overstuffed, and they were made out of parachute material. As such, they had a texture unlike any of the other stuffed animals I had ever encountered, although they did also tend to start feeling like a lumpy pillow after a while. Then again, given that they were called “Puffalumps,” maybe that was just to be expected.

I don’t know what they’re called, exactly. Most places seem to refer to them by the description of the game, rather than any official name: Click and catch game. Pop and catch game. Take your pick. But whichever you choose, know this: They are the best.

What so cool about them? I honestly don’t know, but they certainly did try their best. They also taught us all valuable life skills, like how to use a tape measurer. Well played, Cool Tools.

The 1996 version of the Hot Wheels Car Wash certainly isn’t the only car wash toy the brand has released; it was probably, however, the one that we all thought was the coolest, largely due to the fact that it allowed you to smother your cars in real soap foam. So why the heck have we all forgotten it? No idea. In any event, though, I really wish car washes like this one existed in real life. I’m sure we’d all go clean our vehicles a lot more frequently if going to the car wash was like going to an amusement park.

Originally created in 1986, My Pet Monster remained popular throughout the ‘90s; in addition to the actual toy, there was also (of course) a television show and a movie. A talking version hit the scene in 2001, too, although I’m not sure it did terribly well — despite its low-tech nature, there’s really no beating the original.

Before virtual pets like the Tamagotchi took the world on by storm — and before we had the technology that made them and all the things that came after them possible — we had to make do with inanimate figurines imbued with the personality of a playful, loving pet solely by our imaginations. The fun part was the “secret sachet” aspect of the basic starter sets: You never knew what you were going to get until you opened the package. Sure, this gimmick is a little tired by this point; the ‘90s, though, arguably saw the best use of it: Puppy In My Pocket, Puppy Surprise, and Magic Nursery Babies all carried it off extraordinarily well.

Not unlike a lot of ‘90s toys, however, Puppy In My Pocket was relaunched recently (in 2015, in this case), so hey, if you’re missing your favorite inanimate childhood pal, you can always give the reboot shot.

The commercial I remember — well, that I had forgotten, but then experienced a rush of memories upon watching again thanks to the wonder that is YouTube — dates back to 1992, although Dizzy Dizzy Dinosaur has been around since 1987. And guess what? He’s still around today! Apparently mechanized board games never go out of style.

Hey, look! It’s another toy that was first produced in the ‘80s, but which continued to see popularity throughout the ‘90s! Like so many of these toys (and toys throughout history, really), MoonDreamers had a corresponding cartoon show; although it originally aired in 1986, it continued to see a long and healthy life in reruns on various channels through 1995.

Earlier versions of the dolls came with a necklace for kids to wear, while later ones came with something called a “Dreamtail.” I have no recollection of this “Dreamtail” thing, but going by the illustration on this box here, I assume it was a colorful clip-in hair extension of some sort.

How could I have forgotten about a board game where the playing pieces are actual troll dolls?! And not just troll dolls cast entirely out of plastic — troll dolls that maintained their distinctive, fluffy hair! That is awesome!

I suppose it might be because I never owned the game myself — but I had friends who had it, and after catching just a quick glimpse of the box… hoo boy. Memory overload. Search for the Wishstones was originally released in 1992, but I wonder if they’ll reboot it for the upcoming DreamWorks movie? Time will tell…