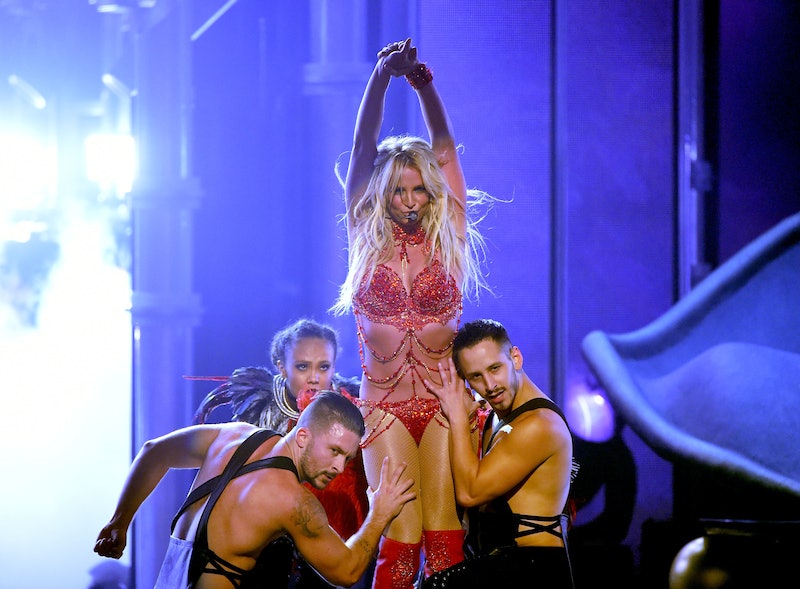 To put it lightly, Sunday night was a busy night for Britney Spears at the 2016 Billboard Music Awards. She hit the stage to perform a medley of her greatest hits (of which there are many) and premiere her new single "Make Me (Oooh)" and accept the Millennium Award. Oh, and she opened the show, just in case you missed it. Spears, who has been enjoying a Las Vegas residency for the past few years, hasn't released new solo music since the 2013 release of her latest studio album, Britney Jean, though she has appeared as a guest on a few pop hits. Looking back at her, frankly, staggering career as a pop star, Spears sang "Work B*tch," "Womanizer," "I Love Rock 'n Roll," "Breath On Me," "I'm A Slave 4 U," "Touch Of My Hand," and "Toxic" for her big performance. Spears' BBMAs performance was a good look back on some of her most recent string of songs, but was missing some of her most iconic hits.

Spears is no stranger to iconic performances — her "I'm A Slave 4 U" performance with the snake is just one of her historic television moments — and she proved why at the BBMAs. The singer strut her stuff in a red two-piece outfit, complete with knee-high red stiletto boots. In true Spears fashion, the pop queen put on quite the show, that involved riding a giant guitar during "I Love Rock 'n Roll," and dancing her heart out during "I'm A Slave 4 U."

Unfortunately, fans were disappointed by the lack of Spears' early hits. Though she did perform "I'm A Slave 4 U" and "I Love Rock 'n Roll" — both off her third studio album Britney — Godney didn't go any farther back in her catalogue of hits. There was no "Oops...I Did It Again," and no "Baby One More Time." Instead, Spears focused more on her last few albums, Britney Jean, Circus, In The Zone, and Britney.