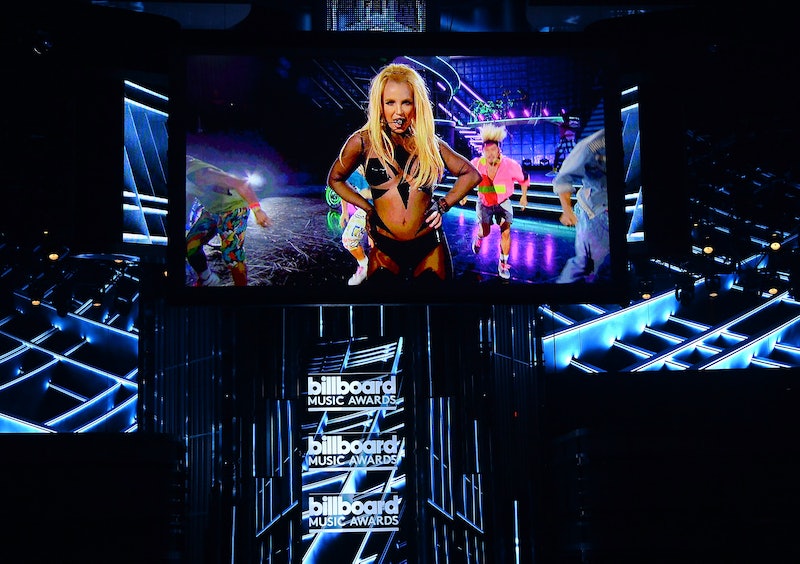 I'm just going to come out and say it — I haven't been a Britney Spears fan for nearly two decades only for her vocal skills. Because of that, it doesn't matter to me one bit if Britney Spears will lip sync at the Billboard Music Awards on Sunday, May 22 or not. Spears will be receiving the Billboard Millennium Award and she's opening the music awards show with a "kick-ass medley" of her hits, according to Billboard. Yet, even when she is the recipient of such a rare award (only Whitney Houston and Beyoncé have received it before), there is always a question hanging in the air: Is Spears going to lip sync during her performance?

When I was blessed enough to see Spears live during her Circus Tour in 2009, I honestly thought she lip-synced, but her performance was so electric that I was too distracted to even care. Her hit songs like "...Baby One More Time," "Toxic," and "Womanizer" are pop masterpieces and with her dancing, costumes, and tricks, the concert was all about the spectacle. As counterintuitive as it may seem since you usually go to a concert to expect live singing, that's not what I — or anyone for that matter — should expect from Spears.

Spears' lip-syncing or not lip-syncing has been a point of contention for years, but there is no official word on how she will be handling her performance at the 2016 Billboard Music Awards. She performed at the Billboard Music Awards in 2015 from her Las Vegas show's stage, singing "Pretty Girls" with Iggy Azalea. As a person with functional eyes and ears, I'd say it appears that Spears is getting at least a little bit of help with the vocals and it could be reasonably debated that since she most likely lip-synced at her last Billboard Music Awards appearance, that she will do it again. Plus, considering that Billboard is promising costume changes in her performance, I'm fairly certain there will be — at minimum — backup vocal tracks bolstering her voice.

Though Spears' camp has kept mum about whether she lip-synced when it specifically comes to her Billboard Music Awards performances, they have spoken out about it in the past. To me, the most honest assessment about the lip-syncing by Spears came from one of her managers Adam Leber while discussing her Piece of Me Las Vegas show. "To put on the show that she puts on, it's virtually impossible to sing the entire time and do what she does," Leber told Medium in 2014. "She's singing on every song, basically, when she has the ability to sing. There's no way you can dance for 90 minutes straight and sing the entire time."

Even Spears addressed lip-syncing rumors before her Vegas residency started. "I'm definitely going to be singing live," Spears told Chicago’s 103.5 KISS FM. "I always sing live. It doesn't sound so great all the time, but I do my best."

While her live singing might not always "sound so great," Spears' Vegas show is still going strong and it is not holding her back from being repeatedly recognized by the Billboard Music Awards. Yes, you may want your entertainers to be great and not just doing their best, but no one is forcing you to watch Spears' performance or see her live.

Regardless if she lip-syncs at the BMAs, I am pumped to hear what hit songs of hers this medley will contain. Although it had previously been stated that the medley would incorporate her yet-to-be-released song "Make Me (Oooh)," The Las Vegas Sun's Robin Leach had to break the bad news that technical difficulties have delayed the release of her new single and video, so it will not be part of the medley.

No matter what songs are featured in her medley, I'll be watching Spears tear up the stage — lip-syncing or not — when she opens the Billboard Music Awards at 8 p.m. ET on May 22 on ABC. Because however the performance goes down, Spears is an icon of this millennium and deserves her award.