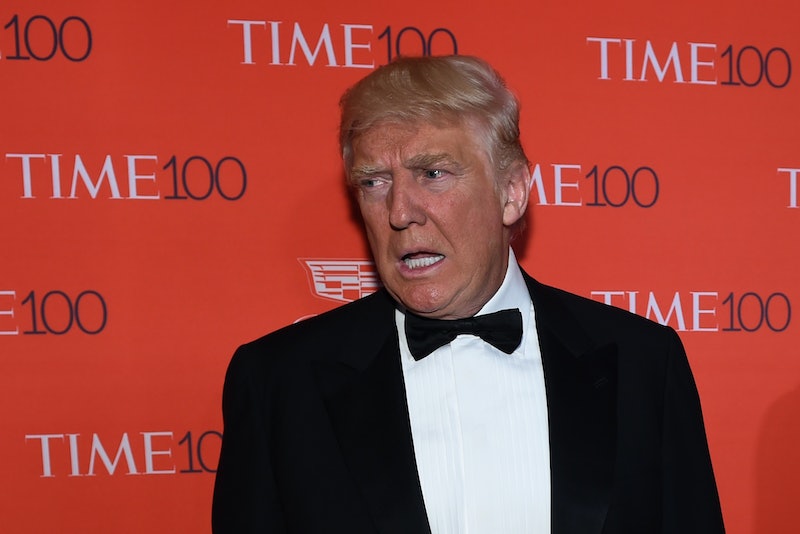 TIMOTHY A. CLARY/AFP/Getty Images
By Seth Millstein
May 21, 2016

On Friday, Donald Trump was asked whether he’d consider tapping Bernie Sanders as his running mate. Trump dodged, as he usually does when he's asked things, but said that it was “a great question.” But it wasn’t a great question. It was a ridiculous question, because the Vermont senator is more likely to be drafted by the NBA than become the Donald’s running mate. The fact that we’re even talking about Sanders being Trump’s vice president suggests that the veepstakes, fun as they are, might be getting a bit out of control.

It would make zero sense for Sanders to accept a slot on the Trump ticket, because Trump and Sanders are diametrically opposed on almost every policy issue. They disagree on health care, immigration, abortion access, terrorism, gun laws, climate change, and — conventional wisdom notwithstanding — free trade. As if that weren’t enough, Sanders has already pledged to “do everything I can to make sure that Donald Trump does not become president of the United States.” That probably doesn’t include running as his vice president.

This is just the latest development in a veepstakes that’s already veered off-course. Earlier in the month, Trump lackey Ben Carson suggested that the presumptive GOP nominee might put a Democrat on his ticket. This led to a flurry of speculation as to who that Democrat might be, and soon enough, conservatives were proposing that Trump choose Jim Webb, the former senator and 2016 Democratic presidential candidate, as his running mate.

Trump later clarified that he isn’t actually thinking about naming a Democratic vice president. That makes a lot of sense, because he’s already struggling to unify Republicans around his campaign, and putting a Democrat on the ticket would be enormously counterproductive to these efforts. That goes double for choosing a Democratic Socialist like Sanders. It is not going to happen.

That said, it’s understandable that the media is entertaining such preposterous ideas, because this election cycle is currently in a bit of a lull. The primaries are almost over but not quite — Washington, D.C. will cast the last votes on June 14 — and the general election hasn’t started in earnest yet. That puts the candidate’s vice presidential selection process in the spotlight, simply because there isn’t much else going on in the election right now.

Amazingly, a hypothetical Trump-Sanders ticket isn’t the most ridiculous idea to be floated by the political media on Friday. Hours after Trump was asked about Sanders, NBC reported that Dallas Mavericks owner Mark Cuban is open to being Hillary Clinton’s running mate. Enough, already!