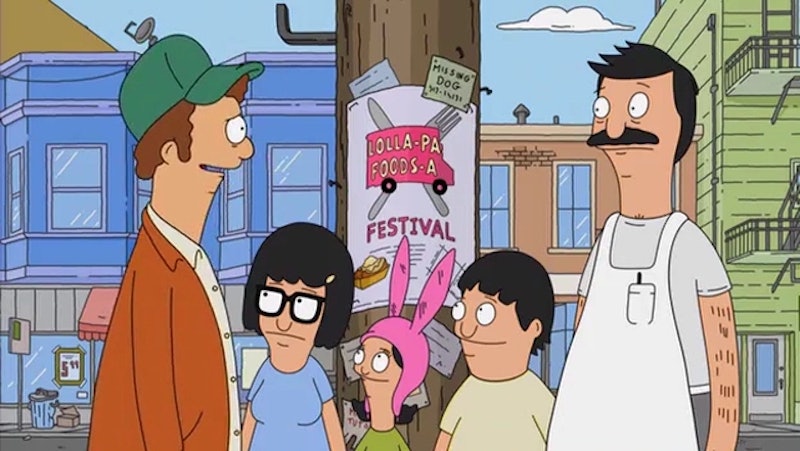 On Sunday May 22, we'll get to witness a historic event in cartoons: the Bob's Burgers 100th episode will air, proving the show has what it takes to outlast the competition. Let's put this in perspective: the wildly popular Pinky and the Brain only made it to 95 episodes, Gravity Falls made it to 40, and MTV's Daria made it to 65. Sure, it's not quite The Simpsons yet, but 100 episodes definitely signals it's on its way to a long, healthy cartoon lifespan. So what does Bob's Burgers have that other shows lack?

Roughly a joke every other line? The incomparable comedy smarts of Flight of the Conchords ' Kristen Schaal? Endless burger themed puns?

While all the above has definitely contributed to the show's success, it's tonality that's key to why Bob's Burgers makes for such compelling viewing. Bob's Burgers treads a very nuanced line: its comedy is as warm as it is smart. While the jokes are intelligent, the writers never revert to snark. Watching Bob's Burgers can feel like getting an endless hug. The world the Belchers reside in is a utopian one: while all of the characters are flawed and can be mean to each other, at the end of the day, they all try and treat each other pretty decently.

This isn't just limited to the Belchers. The Belcher children go to a high school where despite being the weirdest kids in school (Tina makes odd groans when around kids she's into, Gene is obsessed with jingles and Louise is constantly plotting the downfall of other kids) they're well-liked and aren't pressured to change to fit in.

This utopian world is what makes the warm humor of Bob's Burgers possible. We see it a lot in the way the Belcher family talks to each other. They express themselves in a completely unfiltered way, knowing they won't get made fun of for their weird quirks. So when Bob expresses doubt about his looks, Tina's quick to comfort him in a way we can both relate to and laugh at because we relate to it, but we'd never say it out loud: "Dad, if you believe you're beautiful, you will be. I did."

When two cute boys fall for Tina at the same time, she feels confident enough in her own feelings to make the totally unstrategic move that's going to offend and alienate them both: suggest she dates both of them. "We can make this work," Tina pleads. "We can work out a dating wheel, just like a chore wheel. Let's put the try in triangle." You can't blame her for trying: In the utopian world of Ocean Avenue, a teenage girl getting to date two dreamboats at the same time with their knowledge and consent is as likely as anything else to happen.

And it's not just Tina who gets to say exactly what she wants to, whenever. When Linda instructs Bob “When I die I want you to cremate me and throw my ashes in Tom Selleck’s face,” we know we're in a realm where anything's permitted, including secret moustache-worship fantasies.

So sure. Bob's Burgers' three kids, two parents, running-a-burger-shop set up isn't as fantastical as Adventure Time or The Powerpuff Girls, but what it lacks in contextual fantasy, it makes up for in providing viewers with the ultimate emotional fantasy. After all, what could be more magical than getting to say whatever funny stuff pops up in your head, regardless of how weird and socially unacceptable it is?