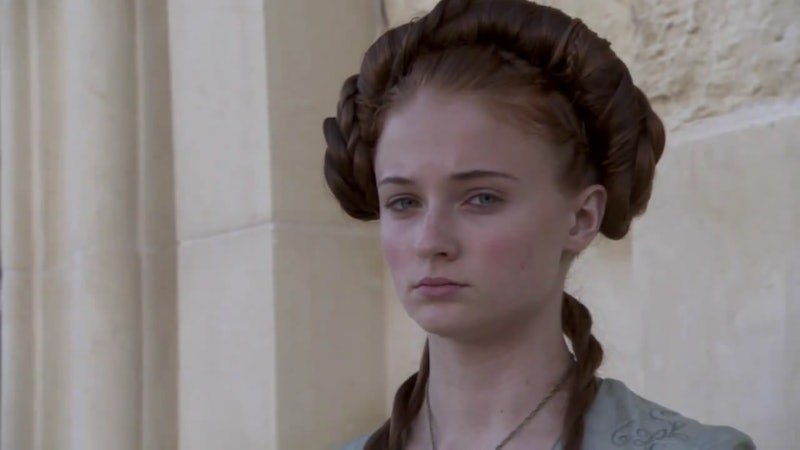 Dating in New York sucks. Dating in <insert your hometown here> sucks. But let's be real, dating men in Westeros is definitely not the best-eros. Case-in-point for this: Sansa Stark's dating life. From Joffrey to Ramsay, things haven't been the greatest in the love department for our gal. So, Game of Thrones ' Sophie Turner now has a solution: In a new interview, she stated that she thinks Sansa's next relationship should be with a woman.

In a video interview on the set of Game of Thrones Season 6 with Entertainment Weekly, Turner said "In the GoT universe, I think she's going to have to swing the other way, because the men thing isn't working for her. Judging from Sansa's relationship with Margaery, probably Margaery. Or Arya, because I'd like to see that happen! I'd love a love scene between Arya and Sansa."

It's easy to sympathise with Turner (OK, minus the incest joke). When we review Sansa's dating history, it's not, y'know, great. She was engaged to Westeros' premiere sadist, Joffrey Baratheon, cringed through a marriage minus physical or emotional attraction to Tyrion Lannister, and got wed off to the only man on the show more psychopathic than Joffrey, the completely terrifying Ramsay Bolton. It's hard to imagine much of a worse love life. So in a dream world, who should Sansa date? Let's review her options. But before then, check out her video interview:

Sure, practically impossible from a political perspective given that it seems unlikely Daenerys would be respectful about Sansa's dad. But from an emotional perspective, these ladies have been through so much that's the same. Both were abused by their husbands on their wedding night. Both were used as political pawns. Both have a delicate exterior and serious inner strength. Honestly, I just want someone for Sansa who can protect her and mean she doesn't have to go through any more trauma, and Daenerys has DRAGONS. Let's do this.

Is it me, or does Cersei hate Sansa just a little too much? Sure, there's various political reasons behind it, but somehow it feels personal, begging the question, is she just mean to Sansa for the same reasons that boy in your infant school wouldn't stop dipping the end of your ponytail into a paint pot? I.e., he was obsessed with you. I'm not saying Sansa should reciprocate Cersei's feelings, but disdainful sex can be all sorts of hot, so maybe a one night stand with lots of hair pulling?

Brienne is loyal, good-hearted and, usefully for Westeros, is pretty handy with a sword. Besides, Sansa and Brienne have history (spoiler alert). At the beginning of Season 6, Brienne saves Sansa from Ramsay's hunters. This was hardly surprising: we know from past episodes that Brienne puts Sansa above every other person in the world. In Season 5, she told Sansa that she would lay down her life to protect Catelyn's daughter. Dude, Westeros is dangerous. Brienne is a lady who could make sweet tender love to you and also function as a bodyguard in your bed. OK, I'm sold. Brienne and Sansa have to happen. Immediately.

In short, please can we send lots of letters petitioning for some not-in-the-books lady on lady loving between Sansa and Brienne? I seriously can't take any more of Sansa dating the worst men in the universe.