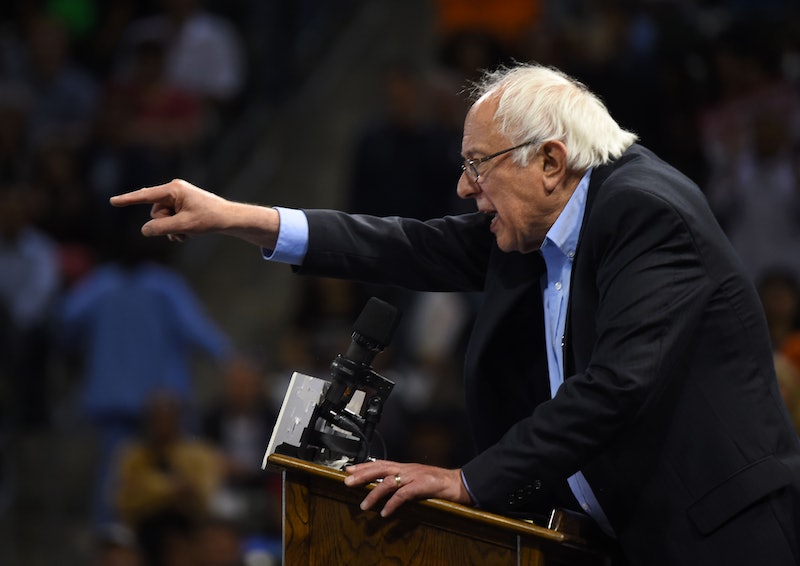 According to RealClearPolitics, Sanders trails Clinton by 760 delegates. To be more specific, he lags by more than 270 pledged delegates and nearly 500 superdelegates. There are more than 900 delegates left up for grabs, but Clinton needs fewer than a hundred to clinch the nomination. That's if you include superdelegates — and Sanders is hoping you don't.

On Sunday, CNN aired its latest interview with Sanders during Jake Tapper's State of the Union. Sanders told Tapper that he wants the Democratic Party to reconsider its use of superdelegates, calling the system "absurd." Sanders repeatedly noted that most of Clinton's superdelegates endorsed her before any other Democratic candidate had announced his candidacy, suggesting that the system isn't fair.

In the same interview, Sanders also suggested a change to the Democratic Party's leadership. If elected, Sanders has said that he would not reappoint Democratic National Committee (DNC) Chair Debbie Wasserman Schultz. In fact, he even went so far as to endorse her opponent in her upcoming congressional re-election race. Wasserman Schultz faces Tim Canova, a law professor, in a Florida election this summer.

Wassermann Schultz assumed the DNC chair position in 2011 when she was appointed by President Obama. Throughout the current presidential election cycle, Sanders — and, to a lesser extent, former candidate Martin O'Malley — has criticized Wasserman Schultz for allegedly favoring Clinton. In response to those criticisms, Wasserman Schultz told Fox News in March, "There's just no shred of evidence to suggest that I'm favoring Hillary Clinton ... I could have worked a lot harder at it if that were what I was doing."

The Democratic Party is supposed to remain officially impartial in its administration of presidential primaries. (For more on this, see the Republican Party's struggle to remain impartial in light of Donald Trump.) Now, Sanders has made his distaste for Wasserman Schultz official. For her part, Wasserman Schultz said, "even though Senator Sanders has endorsed my opponent, I remain, as I have been from the beginning, neutral in the presidential Democratic primary."

But wait, here's the rub: Sanders won't be able to make any of his changes to the Democratic Party unless he can win under the current Party rules and processes. His political revolution has caused quite a stir in a race that was largely assumed over before it even started, but by the numbers, a stir might not be enough for Sanders to make any real changes. For her part, Clinton hasn't officially endorsed Wasserman Schultz or her opponent — but she has a better chance of selecting the next DNC chair than Sanders.