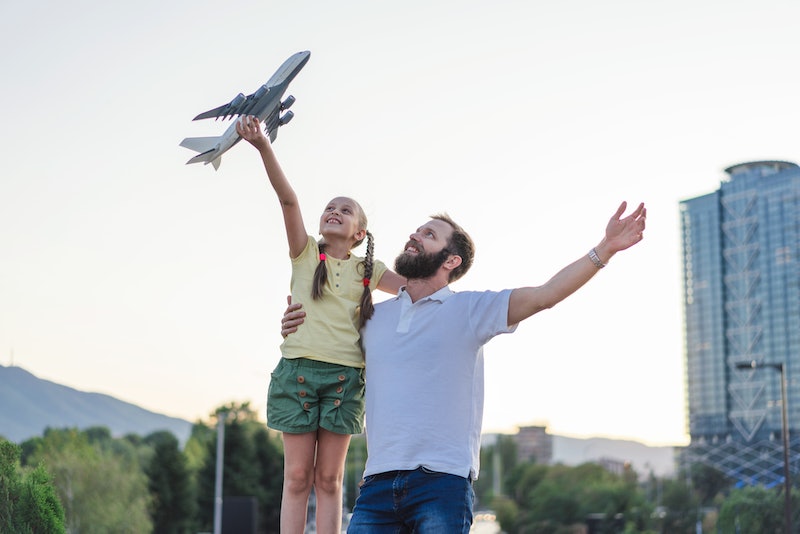 Dads deserve a whole lot of credit. They bandage scraped knees, do their part to provide for their families, throw down wisdom, and show their kiddos how to live right. So Father's Day is not only a day to honor your dad — even though he's no doubt an OG bad-ass on the outside, and a giant softie on the inside — but also to remember the history of Father's Day. Let's celebrate all the loving dads who came before him, and all who will come after, as well.

Being a dad is a big role, and though I have no kids of my own currently, I can't think of a higher honor than creating your own mini me and giving them endless love and support. It's also a highly respected position in the eyes of a child. So to those dads who have stuck by their kids through thick and thin, and loved them for all that they are, you rock. Like, a whole lot.

But let's go back to the beginning, where this annual celebration first began. Because it's been a long and slightly weird road that led to the creation of this holiday. Believe it or not, Father's Day had trouble keeping pace with the success of Mother's Day! Not all holidays are created equal, I guess. Huh, interesting. Anyway, here are six things you probably didn't know about Father's Day.

1. It Was Created to Honor a Widower and Loving Father of Six

A woman named Sonora Dodd of Spokane, Washington is actually credited with starting Father's Day. She heard a sermon on Mother's Day, and wanted to honor her father, William Jackson Smart, who was a widower, and raised Dodd and her five siblings on his own.

2. Dads Were Celebrated After Moms

Moms came first in terms of being annually honored with gifts, love, and thank-yous — Anna Jarvis started Mother's Day in 1908. The first Father's Day was celebrated in Dodd's home state of Washington on June 19, 1910. However, it was not declared a national holiday until 1972, 58 years later.

3. At First, The Holiday Was Socially Rejected By Many Men

According to one historian, many men "scoffed at the holiday’s sentimental attempts to domesticate manliness with flowers and gift-giving, or they derided the proliferation of such holidays as a commercial gimmick to sell more products — often paid for by the father himself." Well, if that isn't just the most bitter example of old school sexism, I don't know what is.

A movement was created in the 1920s and '30s to do away with both Mother's Day and Father's Day, and celebrate a shared day called "Parents' Day" instead. But after the Depression, the movement didn't take, as retailers and advertisers took that opportunity to reinforce the need to celebrate the days separately by buying each parent lots of gifts.

5. Then It Became a Commercialized Goldmine

Fast forward to today, and we show our dads more than $1 billion each year on Father's Day in the form of gifts, and with 74 million Father's Day cards given. That's a lotta Dad love.