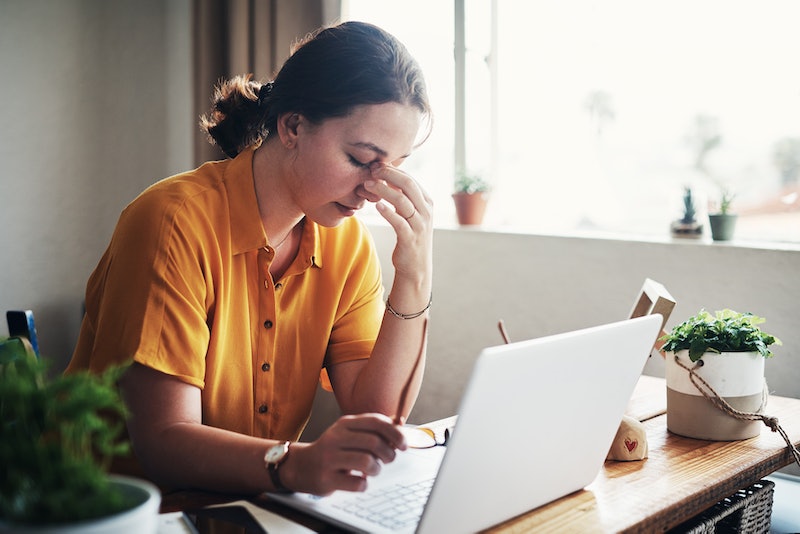 We always make a big deal when it's Mercury retrograde, wondering how the heck we're going to survive a three week-long stretch of communication mishaps, glitches, and general chaos, but this astrological phenomenon is actually surprisingly common. How many times a year is Mercury retrograde? The universe isn't constantly messing with you, I promise, but this little planetary quirk does happen pretty often — usually three or four times a year. So, if Mercury retrograde is something that stresses you out, it's probably a good idea to mark your calendar so you will be ready the next time it strikes.

I'm not an astrologer, but I have felt the effects of Mercury retrograde firsthand and wow, it's a doozy. I mean, it hasn't upended my entire life or anything like that — I haven't toppled down into a sinkhole, or been hit by a car, or withdrawn my life savings in cash only to watch it all blow away in the wind — but it's the little, everyday struggles caused by Mercury retrograde that has earned this period its bad reputation. It's a time that is notoriously awful for making plans, or starting new projects. And because it's not entirely avoidable (we can't all just hunker down at home for three weeks at a time when Mercury retrograde hits), we kind of have to grin and bare it. At least we're all in this together, right?

Mercury retrograde refers to when the planet appears to be moving backwards in the sky. It's not really moving backwards, but that's certainly the illusion it gives off. In fact, the reason it looks this way is simply because Earth is moving faster than Mercury is — but life can certainly feel a little backwards when Mercury is retrograde, especially when it comes to areas of communication and technology.

Mercury retrograde doesn't last forever — three weeks, usually, and then life returns to normal. The problem is that Mercury retrograde always seems to sneak up on you. In 2016, Mercury retrograde happens four different times. We already survived the first two occurrences of Mercury retrograde this year; it first hit earlier in January, and again at the end of April. The next time Mercury is retrograde in 2016 will be Aug. 30, and it will go on until Sept. 22. The one after that begins Dec. 19, and will last until Jan. 8, 2017. Mercury retrograde strikes again three more times in 2017: April 9 through May 3, Aug. 12 through Sept. 5, and Dec. 3 through Dec. 22. As you may have noticed, there is a bit of a pattern to it all. Expect Mercury retrograde once in the spring, once in late summer, and once at the very end of the year.

It's easy to go on and on about all the ways Mercury retrograde is ruining your life, and I'll be the first to admit that I kind of love the idea of being able to blame the universe for all my problems, but Mercury retrograde isn't all bad. In fact, it can be a great time for self-reflection, letting go of baggage, and tying up any loose ends. So, as tempting though it may be to spend the duration of this period hiding at home, speaking to no one, try to see the silver lining, if you can. Now is the perfect chance for you to finish up any outstanding projects, and to really look back and see what areas in life you think could use some improvement going forward. So what if Mercury retrograde hits three or four times a year? Just think of all those amazing opportunities for introspection, contemplation, and ultimately, personal growth.

More like this
How To See The Lunar Eclipse On May 15-16, 2022
By Kaitlyn Wylde
All The Astrological Events Happening In June
By Nina Kahn
Here's Your Daily Horoscope For May 26, 2022
By Mecca Woods
Here’s Your Horoscope For June 2022
By Alexandria Lettman
Get Even More From Bustle — Sign Up For The Newsletter