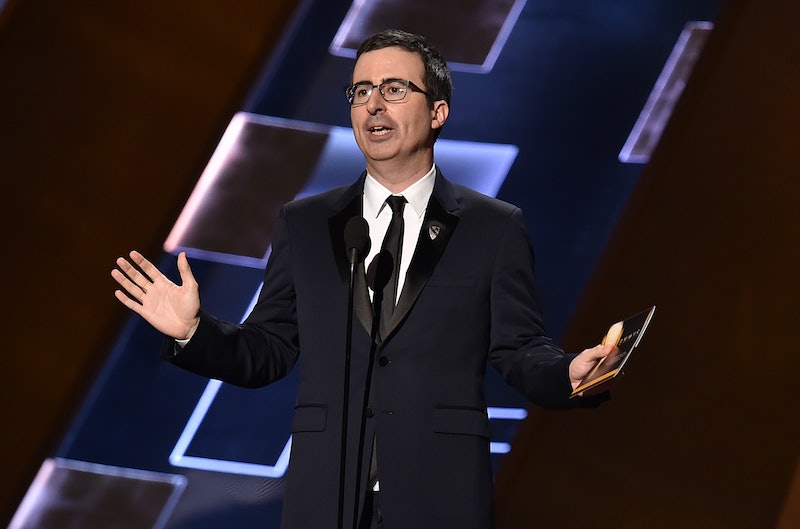 It would seem Justin Trudeau's honeymoon is over. Since he was elected Canada's prime minister, the politician has gotten positive news coverage around the world for everything from holding baby pandas to flawlessly explaining quantum computing to a room full of skeptical reporters. That's all over, though, at least according to John Oliver's segment on Trudeau in his May 22 episode of Last Week Tonight.

In a night focused on the American electoral system, Oliver spent a few minutes looking toward Canada, "what you'd get if America and Britain had a baby they abandoned in the snow." Oliver was a big proponent of not-Stephen Harper (anyone but the former Conservative PM) in the country's October election, even breaking Canadian law in telling his viewers to vote for change. And they did, electing Trudeau, who have even managed to give Obama a run for his money in likability.

So when an incident transpired in the Canadian Parliament on Wednesday, May 18, it was a big surprise: While attempting to vote on an assisted suicide bill in the House of Commons, a group of opposition representatives circled a party leader, trying to delay the vote. In an attempt to free him, Trudeau elbowed a colleague from an opposing party in the ribs. Not so good. But here's Oliver's take on "Elbowgate":

I guess that's a brawl by Canadian standards. Although in New York, to be honest, we just call that shopping at Trader Joe's. But still, Trudeau absolutely should not have done that, and he clearly knew it given how quickly he took to the floor to apologize.

Oliver then showed a clip of Trudeau summoning an apology off-the-cuff in which he goes into detail about the motions his arm made. He admitted coming into physical contact with other members, "including someone behind me who I did not see." He went on: "If anyone feels they were impacted by my actions, I completely apologize. It's not my intention to hurt anyone." The room broke into a standing ovation.

Oliver had a bit more to say:

Wow, stammering out an apology that goes on to receive a standing ovation. That clip may as well just be the new Canadian anthem.

The opposition, though, wasn't having it, calling Trudeau's unintentional elbowing a "physical molestation." So that led Trudeau to apologize a second time, and then a third time at an official apology for the Komagata Maru incident, which was when, in 1914, Canada refused entry to a ship full of Indian migrants who hoped to start a new life in Canada.

Oliver pointed out that Trudeau then also apologized again "because his elbowing might take away a bit in the news from the apology that he was supposed to be celebrating." Then the next morning, returning to the House of Commons, Trudeau — you guessed it — apologized again. And that's a few too many apologies for Oliver:

Oh, for f*ck's sake. Enough! Enough! There may be no clearer difference than the United States and Canada than the fact that in the U.S., presidential candidates write books called No Apology while in Canada, Trudeau may be expected to spend the remainder of his term in office apologizing for the existence of his arm wherever he goes.

That said, if he needs another place to go and apologize, I'm sure Oliver would be happy to have him on Last Week Tonight — especially if there are baby pandas.

More like this
How To Fight For Reproductive Rights, Based On How Much Time You Have
By Courtney Young
President Zelensky Spoke Out On Ukraine's Chances Of Hosting Eurovision Next Year
By Sam Ramsden
Yes, Billboard Queen Angelyne Really Ran For Governor Of California
By Brad Witter
Watch Benedict Cumberbatch Lead An ‘SNL’ Medieval History Lesson On Roe v. Wade
By Grace Wehniainen
Get Even More From Bustle — Sign Up For The Newsletter