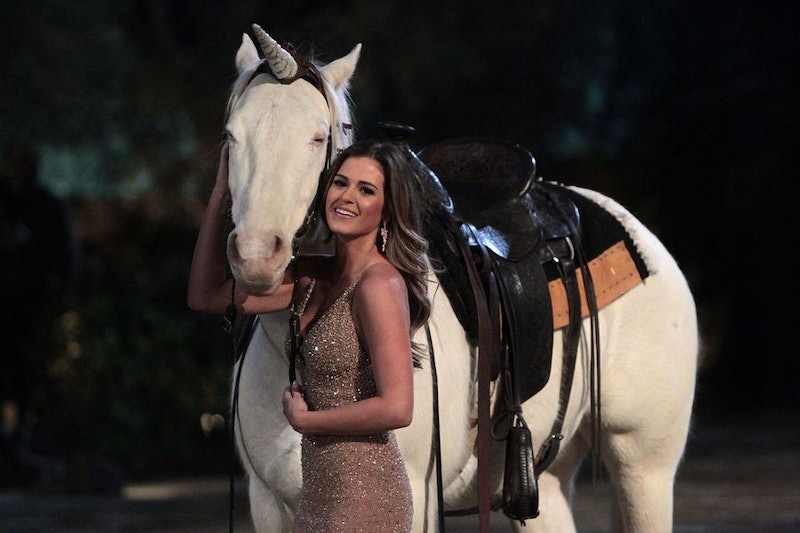 If there's one thing we can count on with every season of The Bachelor and The Bachelorette, it's that there will be no shortage of dresses covered in sequins. Ever. JoJo Fletcher's Bachelorette premiere dress was pretty much everything that makes Bachelorette fashion great, and it certainly did not disappoint. The gown was a body-con, floor-length, bedazzled number that was classically pretty to say the very least. But if you're like me and can't stop thinking about how the nude sparkly dress reminds you of something else, then there's probably a reason. JoJo's dress looks eerily similar to the gown she wore at the Final Rose ceremony. You know, the one she was wearing when Ben chose Lauren because he "found someone he loved more"? Yeah, that dress.

Both dresses feature deep V-necks, a body-hugging silhouette and a nude color with sparkles everywhere. While JoJo's Bachelorette premiere dress is a little more mermaid-ish than the Final Rose look, they both have generally the same shape. And sure, one is a little more on the tan side of nude, while the other is a peachy hue, but... from faraway, it's basically the same exact dress, give or take an embellishment or two.

Sure, JoJo could be using the lookalike dress as a way to say that the last season of The Bachelor is just part of her past now — no need to make a big fashion statement to separate herself from it. But it's probably more likely she just know what hues she looks great in.

And if that's not where you think you've seen the gown before, then I have another option for you that might ring a bell.

In any case, JoJo looked great at the end of last season and at the beginning of this one, and I'm very sure there are many, many more sparkly dresses to come.