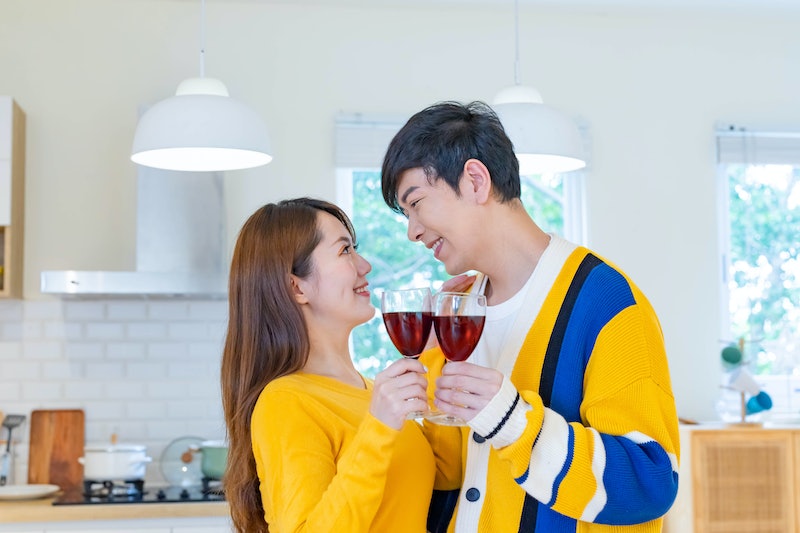 In the beginning of a relationship, there are lots of ~big steps~ worthy of sharing with friends and obsessing over late at night. There's the first kiss, the first time you spend the night together, the first time you leave a date knowing another one will be made. Those types of meaningful moments can be grandiose and exciting. They don't slip past you without holding your attention — you can savor them.

But all the milestones between getting naked and meeting each other's parents are much more subtle. They're so subtle, you might miss them if you're not looking for them. The little nuances you share, the way you word things, the way you regard each other, the things you chose to do together, the way you choose to do them — all of these things might seem unimportant on the surface, but when you look back at your relationship once you've been in it for a while, all of these things will seem rich and infused with hints of a future.

The First Time You Eat Breakfast Together

Sticking around in the morning is a big deal. It means you both want more than just the physical out of the relationship. The first time you don't run off in the morning back to your own lives is the beginning of bringing your lives together.

The First Time You Bring A Change Of Clothes

In the beginning of a relationship, it doesn't seem appropriate to show up with a bag of clothes. It takes the casual and spontaneous nature out of spending the night. But once you feel comfortable enough to plan ahead, you're at a turning point in your relationship — it's no longer casual.

The First Time You Say "I Really Like You"

There's "I like you" and then there's "I really like you," the latter has subtext meaning: I like you enough to want to be with only you.

The First Time You Hear "It's Exciting"

If it's exciting, there's an it. And the it is your relationship, which is now a thing. It's good to be excited about where things are going, especially when you're on the same page — you'll need some momentum to move from casual dating to serious commitment.

The First Time You Talk About Your Exes

The First Time You Meet Their Friends

This might happen really early on for some, depending on how social your partner is. But for some people, meeting the friends is a sign of commitment; it means they want you to stick around and they want to know what their friends think of you. You're not just "someone" to them, you're now "the one" they're interested in.

The First Time You Go On A Double Date

By including you in a double date, they're including you in their social circle. It might seem like a casual non-event, but their intentions might be to help blend you into their life, which is definitely an event.

The First Time You Go Away Together

Taking a trip together is a big step. It means being stuck together doesn't sound like a scary sentencing. It means you know how you feel about each other and want to get some good alone time in. It means you want more, it means you're heading into a committed place.

The First Time You Becomes We

The First Non-Holiday You Spend Together

Memorial Day, Fourth of July, Labor Day — these are the best holidays to spend with someone you're building a relationship with. They're not family-oriented so there's no pressure, but they are significant memory-making days, so it's a true milestone if you spend it together.

The First Time You Get Together To Do Nothing

In the beginning of a relationship, you spend a lot of time thinking of fun things to do. You go to dinners, you see concerts, you have wild nights out. Once you realize you're going to be spending a lot of time with this person, you start to just hang out and do nothing. That first night that you met at the apartment rather than a restaurant is a big deal. If you show up in sweatpants, it's an even bigger deal.

The First Time You Get Emotional

The First Time You Talk About What You Want

During some of your first dates, you probably talked about marriage and kids in a super casual, having nothing to do with the person you're talking to kind of way. But once you actually ask each other directly what you want out of life, the subtext is: I can see a life with you, I want to make sure we're on the same page. And although you may not appreciate it in the moment, it is one of the biggest milestones any relationship has.