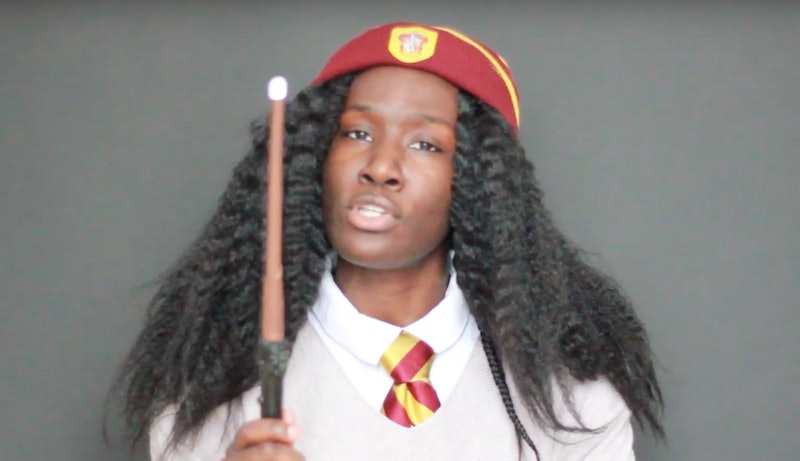 I hope you didn't have any plans today, Potterheads, because you're about to watch this video so many times on repeat that the sun will probs be rising on another day before you come to your senses. Dominque of The Storyscape wrote and performed a Hermione Granger parody of Beyoncé's "Hold Up" (aptly named "Wands Up"), and it is so clever that it just wrung all other Harry Potter parodies that came before it out to dry. I'd say we all need to get on her level, except how?! NOBODY'S NERD GAME SHOULD BE THIS STRONG.

The song specifically focuses the infamous sixth year squabbles between Hermione and Ron, when the two of them clearly had it bad for each other and expressed it by doing super mature things like dating other people, casting bird-conjuring charms, and generally annoying the hell out of poor, oblivious Harry. While we all of us remain mystified as to how literal queen Hermione put up with Ron's nonsense (Ron-sense?) for so long, Dominique's parody song sheds all the light on it that we missed when we read the story from Harry's point of view. And this version of Hermione is not here for Ron Weasley's shenanigans.

Once you fully appreciate the cleverness of these lyrics, it's no wonder that Dominique is a Ravenclaw, or that she has been in the fandom since basically forever. "I have been a Potterhead since 6th grade when I started reading the series, and 6 lovely Costco trips later (where my mom would buy the books for me on grocery trips), there’s been no love lost," she shared with Bustle in an email.

As for her inspiration for the video, Dominique wrote, "I really love literature and music, and so this is simply where my passions collide. A lot of my creativity is in trying to bridge the gap between the two worlds and recently, I’ve just been flooded with these literary parodies... and it’s also a great way for me to keep practicing the guitar." You can see more of her insights on The Storyscape, a platform where she explores storytelling through all sorts of mediums and celebrates them like a true word nerd.

Back to this video, though: all her brilliant Potter puns aside, Dominique has PIPES. Prepare to let her blow your No-Maj mind.

Psst, check out Bustle's podcast, The Chat Room, for talk about all things internet and Harry Potter.

In any case, when J.K. Rowling ends up looking to adapt Harry Potter and the Cursed Child into the musical we were all kinda secretly hoping it would be, she'll know exactly who to call. Be sure to check out The Storyscape on its main website, Twitter, and Facebook, and follow along on YouTube for more of Dominique's clever literary mashups!