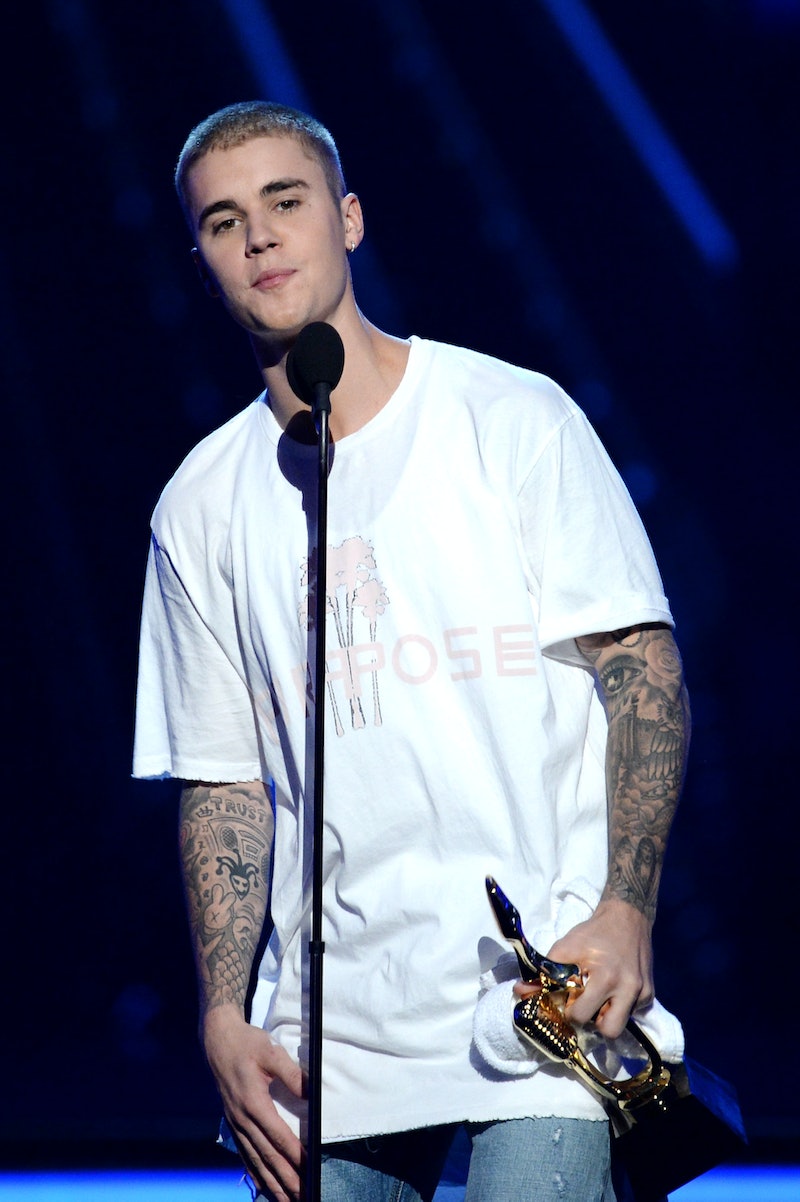 Like many other music fans, I was glued to my television Sunday night watching the Billboard Music Awards in order to catch glimpses of my favorite pop performers. As much as I tried to deny it, I recently became a fan of Justin Bieber's music, and was looking forward to seeing him perform live at the show. As the show went on and Bieber performed and won Top Male Artist, one thing was obvious: He seemed slightly uncomfortable and very unenthused. And on Monday, Bieber posted an honest (and lengthy) Instagram caption in which he confessed that he was disillusioned with awards shows. This, combined with some of his other behavior lately, makes it seems that a break from it all might be a good decision for him right now.

I couldn't help but notice Bieber's incredibly unimpressed look during Pink's performance at the BBMAs, and this seemed to set the mood for him throughout the night. While he was gracious when accepting his Top Male Artist award, he kept his speech very short and seemed to want to get off the stage as quickly as possible. While Bieber usually has a vibrant energy about him, he seemed more subdued, and his Instagram post hints that he is struggling with the spotlight lately.

I don't know about these award shows.. No disrespect to anybody at any of the shows or the people running it. Nothing but love for you guys and your support. But I don't feel good when I'm there nor after. I try to think of it as a celebration but can't help feeling like people are rating and grading my performance. A lot of people in the audience there to be seem worried about how much camera time they will get or who they can network with...These award shows seem so hollow. I get the premise is to award people for their accomplishments, but is it really?

At this point in his career, the 22-year-old has made it clear that he has a lot of issues with authenticity in the business and his most recent behavior on his social media and IRL is pointing to the fact that he is at a crossroads when it comes to how he fits into life in the public eye.

It seems like 2016 has already been a trying year for the singer. In March, Bieber announced (also via Instagram) that he would no longer be participating in meet-and-greets at his concerts. He wrote,

I enjoy meeting such incredible people but I end up feeling so drained and filled with so much of other people's spiritual energy that I end up so drained and unhappy.. Want to make people smile and happy but not at my expense and I always leave feeling mentally and emotionally exhausted to the point of depression...

The strain of celebrity is something that very few people can properly get accustomed to. But unfortunately, his post about taking photos received criticism from fans, who claimed that he was being "ungrateful." This is where I begin to understand Bieber's point of view. No matter what decisions he makes, he will be criticized, and the only thing he can do is make decisions for his own sanity, which he expressed in a follow-up post. Bieber wrote,

If you think setting boundaries is being a douche I'm the biggest douche around but I think it's smart and will be the only way I last. I wanna enjoy life and not be a slave to the world and their demands of what they think I need to do!

It is upsetting that Bieber had to write that doing this will be "the only way I last." He seems to be reaching a critical point when it comes to his career and the extent to which he wants to be a public figure, and I think that fans needs to respect his wishes and offer him support. I believe that the only way Bieber can truly help himself is to focus on the remainder of his tour for his fans, since he's already expressed that's what makes him truly happy, and then take a very long break from the public eye. He has been able to (mostly) change the public opinion of him and release quality music that has turned many people into Beliebers, and he should bask in his comeback.

At the end of the day, Justin Bieber is still a young twenty-something trying to find his way in the world, and I hope he can find the strength to fully do what is right for him.