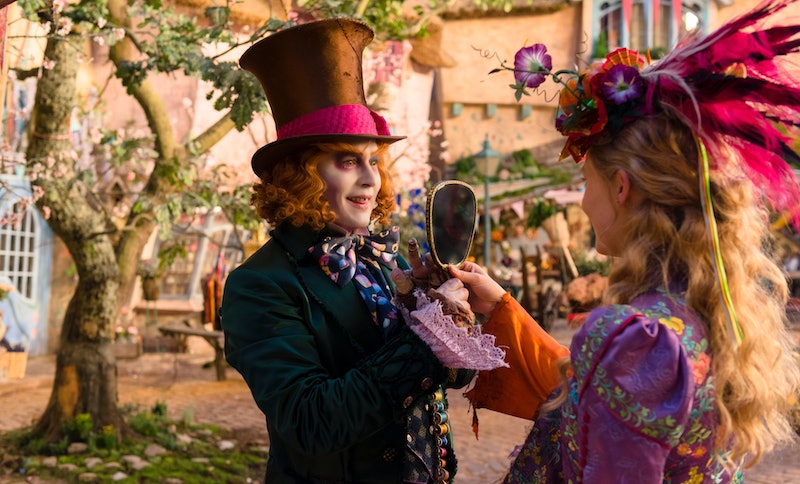 Six years ago Disney took audiences and a girl named Alice down a rabbit hole. In Alice Through The Looking Glass, she's using a different portal. The sequel to Alice In Wonderland has Mia Wasikowska reprising her role as the titular heroine, who finds herself once again in an upside-down world that becomes more real to her than the one she knows. Johnny Depp is back in his Fashion-Week-meets-clown-college make-up and wardrobe to play the Mad Hatter. Helena Bonham Carter and Anne Hathaway return as the Red and White Queens, respectively. And the rest of Wonderland is populated by a combination of old acquaintances and new characters — some fully animated, some partially animated, and some live-action. Can Alice fans look forward to another chapter of her adventures in that colorful, illogical alternate universe? If there is a sequel to Alice Through The Looking Glass , there will have to be some more imagination involved.

British writer Charles Lutwidge Dodgson became famous under the pen name of Lewis Carroll for writing two novels about a young heroine traveling to a place where nothing makes sense. Alice's Adventures In Wonderland was published in 1865; Through The Looking Glass, And What Alice Found There came out six years later. As source material goes, Disney has exhausted Carroll's original Alice writings. Those circumstances don't rule out a sequel, but do mark a point where any future Alice movies would have to deviate sharply from the books a good portion of their audience grew up reading. The first two aren't slavishly faithful anyway.

If Alice Through The Looking Glass gets a sequel film, it won't be the first time that someone has taken it upon themselves to continue Carroll's stories. There are direct sequels, parodies, and spin-off works in all forms of media, dating back even to the author's time. And the character of Alice has been appropriated in countless ways, including ABC's fairy tale drama Once Upon A Time and the Syfy miniseries Alice, which imagined her as an adult. If there's a demand for an Alice sequel, Disney can make it happen.

And the demand certainly might be there. Alice In Wonderland was a box office winner, hitting and surpassing that $1 billion benchmark. Can Alice Through The Looking Glass sustain that momentum? Tim Burton handed over the reins to The Muppets director James Bobin for this second film, but he stayed on as producer, and the trailers show that the Alice universe has retained his distinctive, distorted style. I'm not sure Bobin replacing Burton will have much impact on the target audience for this movie, though. The bigger hurdle for Alice Through The Looking Glass to clear is X-Men: Apocalypse sharing its opening day (May 27). Deadline reports that only a $60 million Memorial Day weekend is projected for the Alice Through The Looking Glass opening, which is less than half of the $116 million its predecessor pulled in on its bow. It's not a small number, but will it be enough to justify a part three?

So far, neither Disney or producer Tim Burton have announced any plans to develop another Alice In Wonderland sequel. (And James Bobin is booked for the third part of a different trilogy: the Men In Black / 21 Jump Street crossover MIB 23.) But the world that Lewis Carroll created is characterized by its boundlessness, so the cinematic door to Wonderland never has to be fully closed.