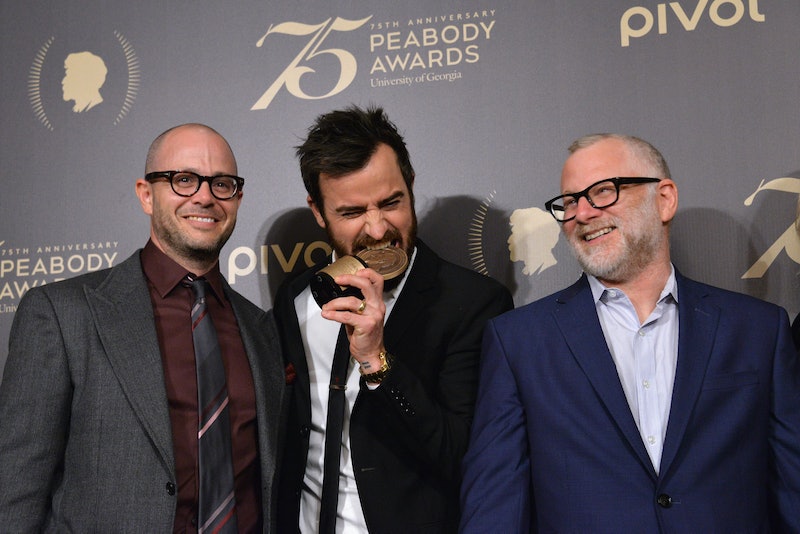 On Saturday, HBO's critically-acclaimed drama The Leftovers was honored with a Peabody Award "for telling a well-wrought story that is inventive, metaphysical, symbolic and compelling." On hand to accept the prestigious prize were co-creators Damon Lindelof (Lost) and Tom Perrotta (who also wrote the novel on which the show is based) as well as executive producer/director Mimi Leder, and stars Justin Theroux (Kevin Garvey) and Ann Dowd (Patti Levin). The cast and crew were attending the ceremony on a brief hiatus from production for the upcoming season, and were more than happy to drop a few cryptic teases regarding Season 3 of The Leftovers … which will also sadly be its last.

When Bustle catches up with him on the red carpet, Lindelof states that he's been taking this show "mostly one season at a time." As opposed to Lost, which most viewers expected to have a grand plan in place from the beginning, The Leftovers "doesn't have a dense mythology or a 'whodunnit' quality," which has allowed him to construct each season "like a novel, because that's what Tom wrote," Lindelof says. "So the first season was a novel unto itself, the second season was like a sequel to that novel — but hopefully something that felt like it had its own beginning, middle, and end — and were there not to be a third one, everyone would have been cool with that."

For his part, Perrotta doesn't care for the word "sequel" to describe the seasons that take place after the original ending of his 2011 novel. "I feel like the show isn't a sequel," he tells Bustle. "It's almost like another possible version; this is the TV version, and it's the product of a collaboration, and it's just a different beast. And yet it extends the world of the book … and we created some connections that weren't there before. Now we're filming Season 3 and I just feel the weight of all that history."

Obviously, that history includes Season 2's abrupt — but not unwelcome — change in location from Mapleton, a typical suburb in upstate New York, to Jarden, a rural town in Texas untouched by the Sudden Departure. So will Season 3 include another massive shakeup? "You can never do the same trick twice," Lindelof says. "We're not gonna do that again. But at the same time, I do feel that the show is moving towards something, and that may require a shift in geography." Lindelof referenced that "shift" again at the show's Vulture Fest panel the day after the Peabodys. "We've been shooting in Texas for the better part of a month," he told the audience, "and Mimi [Leder] is about to go somewhere else that we're not allowed to talk about."

The co-creator also told the Vulture Fest crowd that the final season would be "intense" and "poignant," likening it to losing a loved one when you know the end is near. "What a beautiful way for you to spend the end of their life with them, as opposed to it being shocking and sudden," he said. "So now we’re basically infusing an entire season of television with that idea. We’ve taken matters into our own hands, we’re in control of our own destiny, the ratings are completely and totally irrelevant. We want all of you to watch it," he told the gathered fans. "But everyone else can go f*ck themselves," he joked.

Lindelof has a similar devil-may-care attitude when it comes to audience expectations surrounding a series finale. The man is no stranger to controversial finales, having courted outrage following the end of Lost. So how does he handle that pressure when he knows he's crafting a final season? "I try not to let it affect my thinking," he tells Bustle at the Peabodys.

Really, all that's relevant is … that we bring The Leftovers to the ending that we all feel is right. I know that the ending isn't going to be right for everyone. It's hard enough just to please the eight people who are sitting in the writers room, and then to please Mimi Leder sitting on the set and all the incredible actors. If I can make all those people happy … then I've done my job right. Then it'll go out into the world, and whatever happens happens.

But what is Season 3 actually going to be about? Lindelof remains mum on specific details, but he did speak out about the final season's theme. If Season 1 was about "shock" and the characters not being able to move, and Season 2 was about the characters starting to "take action," then Season 3 is really about "movement." According to Lindelof, the key question of the show's final eight episodes is: "What are these people going to feel next? Are these people going to feel better?" Personally, he says that if "we can leave the characters better off or more realized or more evolved than they were when the show began," then he'll be satisfied.

Hopefully his viewers will be equally satisfied when the Leftovers series finale airs. (HBO has yet to set a premiere date for Season 3.) Whatever happens, I know I'll be watching every episode with a bittersweet combination of excitement for what's coming… and grief for the inevitable end of what's become one of the best shows on television.