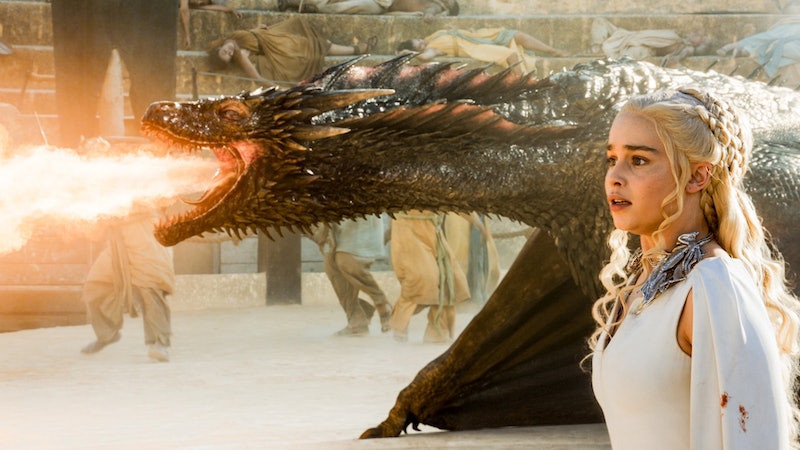 Finding out that your significant other is a two-timing dirtbag is the emotional equivalent of punched in the stomach repeatedly, so it's not at all surprising that plenty of people fantasize about getting revenge on their ex. As fun as it might be to imagine yourself going all Carrie Underwood on your ex's pretty little souped-up four-wheel drive, damaging your cheating ex's property is one way to get your heartbroken self sued. Of course, there are plenty of perfectly legal ways to make sure that a cheater feels almost as bad as you do — and one ex-girlfriend allegedly found the most brilliant way possible. According to Mashable, a guy's ex-girlfriend is punishing him for cheating by sending Game Of Thrones spoilers, and she's clearly channeling the power of Khaleesi to make his life hell.

The story of how this ex-girlfriend brought a seriously brutal winter to this guy's life came from Reddit user Khalessiscorned, and though the original account has since been deleted, Mashable screen capped the alleged conversation. Basically, Khalessiscorned cheated on his now ex-girlfriend "Dany" (not her real name, obviously) a bunch of times during their long distance relationship, allegedly due to his jealousy over her having guy friends and her having slept with a lot of guys before they started dating. (I hope we're all collectively eye-rolling at those reasons.) The clearly ill-suited couple split, but when Dany found out about his cheating, she decided to get sweet, sweet revenge by sending her ex spoilers for Game Of Thrones, knowing that he was behind in the series and couldn't watch it live.

Khalessiscorned took to Reddit to ask for advice on how to get his ex to stop spoiling his favorite show, but really, isn't his ex just living by the rules set up by the Game Of Thrones society? Yeah, he may have been less-than-shocked to watch Jon Snow's eyes pop open, but if he scorned a Lannister or the real Khaleesi, I'm pretty sure he would have had to sacrifice more than just the element of surprise.

Ultimately, this revenge plan is pretty genius — it's not technically hurting anyone, but it is making Dany's feelings very much known. I'm sure that Dany will eventually move on and stop ruining Game Of Thrones for her cheating ex, but until then, I'm not going to be shedding any tears for this dude's plight.