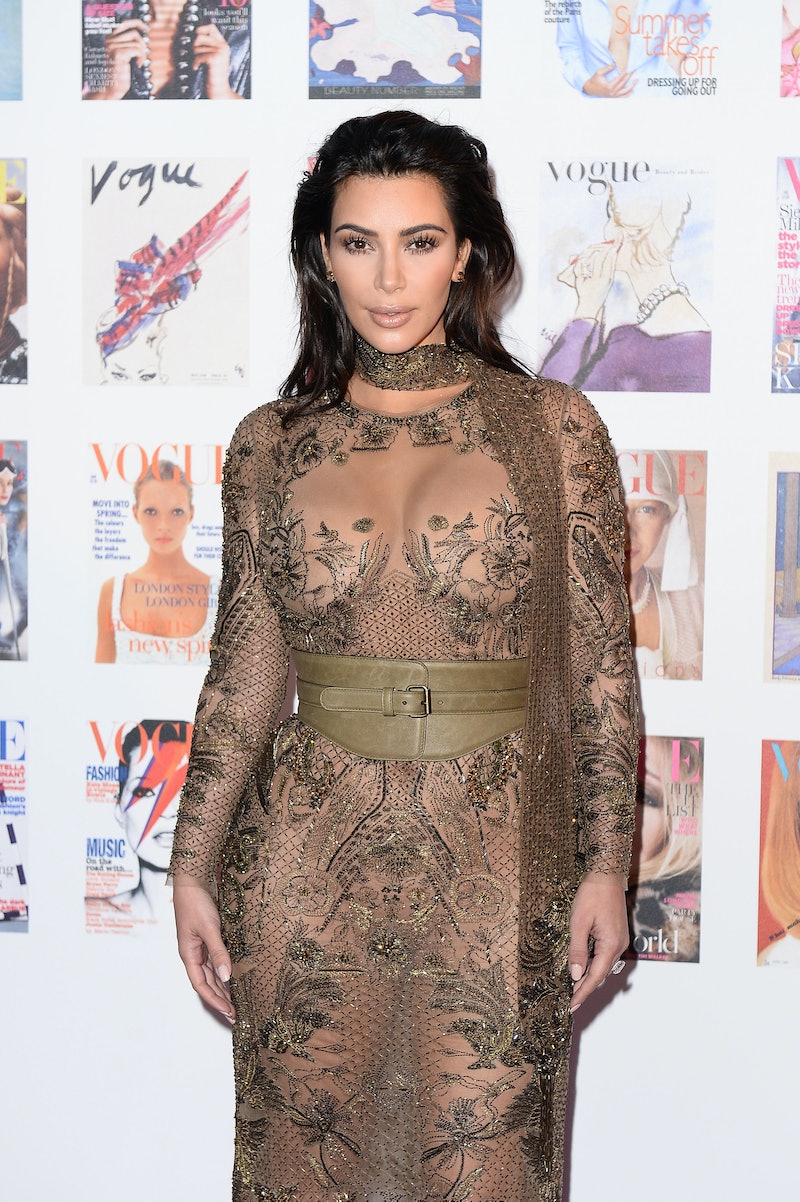 The Vogue 100 Festival Gala took place on Monday night in London’s Kensington Gardens, and as expected, Kim Kardashian's sheer dress did not disappoint. The gala dinner honored Vogue's 100 years, as well as many of the editors, photographers, models, and cover celebrities who have contributed to the glossy's aesthetic for the past century. As a celebrity who has graced the cover of Vogue many times, Kardashian had to choose her very best when it came to her gala look.

According to E!, Kardashian wore a sheer black and gold beaded lace gown from Roberto Cavalli that was similar to the sheer gowns that were popular at the 2015 Met Gala (think her and Beyoncé's gowns). Kanye West wasn't far from his wife during the night, and was dressed in an all-black suit that complemented the meticulous design of her gown.

Kardashian wore a thin, long scarf that had a sort of '90s choker vibe to it and completed the look with a wide belt at her waist. As for her beauty look, Kardashian went for a more natural approach with a slicked-back, straight hairstyle and simple, glowy makeup. Her makeup and styling team definitely did not disappoint tonight.

Kardashian wasn't just there for the dinner — she was also one of the guests on a panel during this year's festival held at the National Geographic Society, according to WWD. She talked with celebrity makeup artist Charlotte Tilbury about how social media has impacted their celebrity brands, specifically about sharing her looks via her mobile app and game:

“I share my favorite looks and my schedule with the mobile team, so that my character can be at the same place, almost like virtual reality,” she said. “I really enjoy sharing my life. The positive outweighs the negative.”

Of course, Kardashian wasn't the only big name at the event. It wouldn't be a Vogue party without some of the most well-known names in fashion, including Kate Moss, Tom Ford, and Giorgio Armani. Kardashian-West may have been the best-dressed couple at the gala, but here's a few of my favorite looks that also featured some sheer or beaded embellishment:

Love the length of this gold gown.

Look at that detailing!

Sheer panels for the win.

Vogue should have more gala dinners so we can all ooh and aww at such incredible outfits!