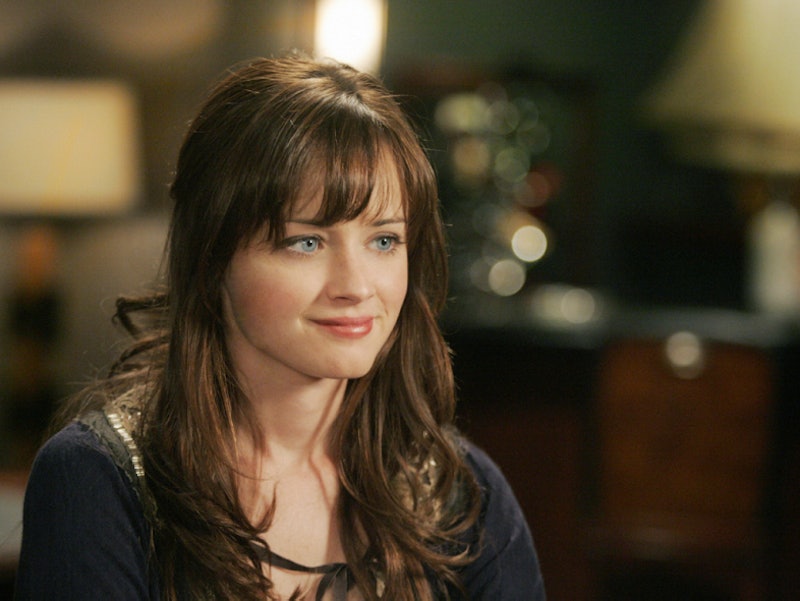 Rory Gilmore certainly wasn't perfect. This was made clear over and over throughout all seven seasons of the Gilmore Girls where Rory made her fair share of mistakes (Hello, sleeping with a very much married Dean). But for many young women growing up, including myself, her intelligence, drive, and general disinterest in being one of the cool people were reasons to look up to her. She was the thinking girl's TV heroine. The female character you felt like you could be because she wasn't out of the ordinary; she was just human. As a human, Rory had a lot of flaws, and, as is the case for even characters with the largest fandoms, she was taken to task for those flaws by the viewers. But there is one thing Rory didn't deserve all the hate for: her naïveté.

Sure, Rory could be infuriating sometimes. Even her biggest supporters are willing to admit that. She could be a little dense, like when she thought Dean only wanted to be friends after she decided to start dating Jess. Or when she thought that Jess and Dean's Winter Carnival experience was enough to erase all the bad blood of the past year. C'mon, Rory, with all the books you read, you should have realized that was never ever going to happen. But, after re-watching the show as an adult, you realize that Rory wasn't really naive. She was a teenager trying to figure things out.

As smart as one can be, hormones and inexperience can lead you to think about things in a very specific way. Namely, through your own eyes only, due to the fact that you have little world experience. Growing up in a small (small) town like Stars Hollow certainly wouldn't help expand Rory's horizons, which is something we see when she heads to New York to visit Jess and doesn't think to check the bus schedule going back. However, this isn't a Rory specific problem. I think we all could admit that, in our younger days, we made some questionable choices that, at the time, we thought were the right ones, only to learn later we were definitely suffering from some inflated sense of self.

It didn't help that Rory didn't always realize the privilege that she had. Not everyone gets to go to the schools of their dreams, thanks to their grandparents being wealthy socialites, or have their mother treat them like they're a perfect angel who could only do right. This undoubtedly skewed Rory's outlook on life, specifically making her believe that everything works out for her, so that must mean every choice she makes is the correct one. There wasn't much consequence to her mistakes until she leaves Yale after Mitchum Huntzberger tells her she doesn't have what it takes to be a journalist.

As the viewer, you wonder how could Rory be so smart and do something so stupid? How could Rory give it all up like that after years of telling anyone who would listen that she wanted to be Christiane Amanpour? But we're not thinking about it from Rory's perspective. Rory, who is now a 20-year-old, is scared and confused about her future, and is thus doing whatever she thinks will solve this problem in the quickest way possible. It's a naive move, sure, but it's also one you can imagine a distressed college student, who thought she had things all planned out, making. It's reckless, that's true, but it also reeks of inexperience.

We think of Rory as being an adult, a mini-Lorelai who knows exactly who she is and what she needs to do. But Rory's still figuring things out in the years we see her. Rory's naïveté is to be expected in high school and college, when you're trying so hard to find yourself. When you're, as Britney Spears once said, not a girl, not yet a woman. Rory grew up protected by her mom, her grandparents, and her town, but, in the moments after she leaves Yale to move in with her grandparents against Lorelai's wishes, we start to watch Rory realize that she doesn't always know what she's doing. Before this, Rory, who was as stubborn as her mother, didn't always see things exactly as they were, but how she wanted them to be.

This is part of the reason it's weird to fault Rory too much for being naive. It seems realistic. She was at that age where she may have seemed wiser than her years, but she really wasn't. As we watch her finish out college and prepare for that next step, we see her start to lose some of that naïveté, to attempt to go off on her own and figure things out without her mom, her grandparents, and her town. When we leave Rory, she's on her way to becoming her own person.

It's what makes the upcoming Netflix revival, Gilmore Girls: A Day In The Life so exciting. I can't wait see what happened to this girl that we watched grow up after she got a chance to experience life on her own terms. I imagine she's not nearly as naive as we may have thought she once was.