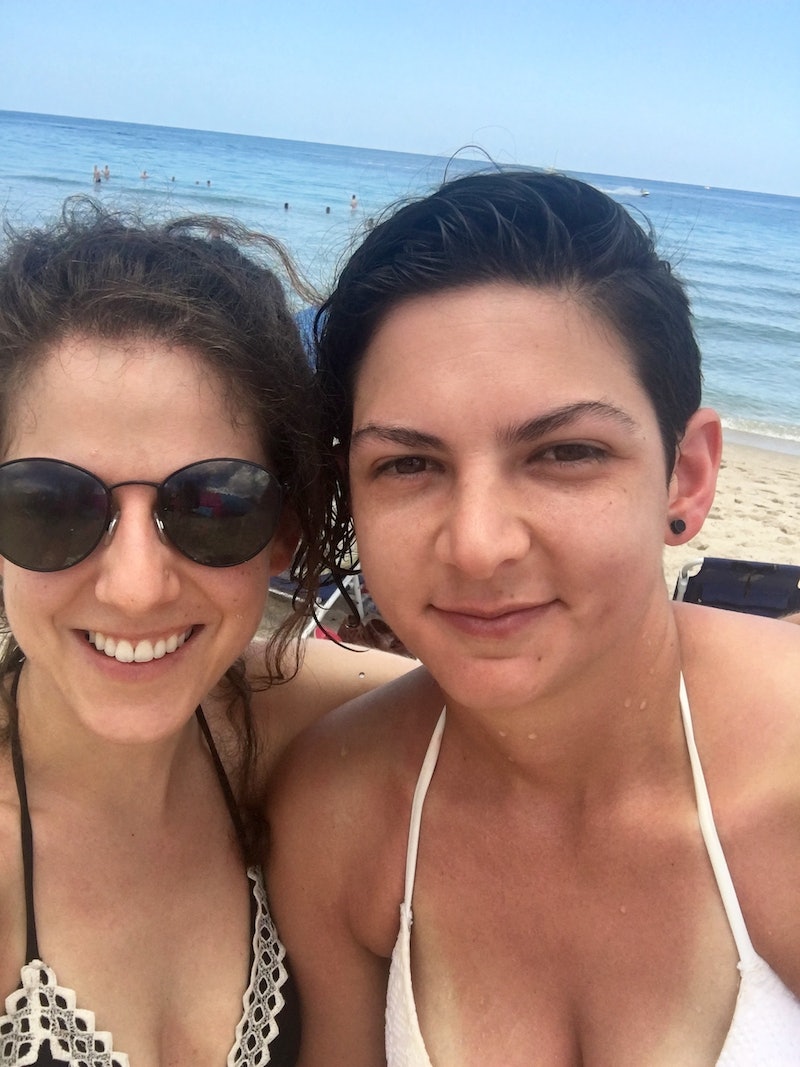 My best friend Mich also makes me laugh more than anyone in the world ever has or will. Even when she's at her lowest, she manages to have me bending over like I'm being invisibly tickled to death. Every day, she commutes over an hour each way to fight for the rights of immigrants, many of whom are seeking asylum and facing deportation. The other week, she helped free a mother who's been detained for months, reuniting her with her four children. I was on my way home from a vacation in Jamaica when she texted to tell me the happy news, and I couldn't help but think how unfair it was that despite working harder and helping more people than anyone I know, Mich doesn't have the disposable income right now to take vacations, unless they're to visit her family in Miami for holidays.

So when her anniversary and 29th birthday coincided on the same weekend, I decided it was time to take drastically fun measures: I announced I was taking her on a weekend getaway. I used my frequent flier miles, booked an affordable but highly-rated hotel on Hotels.com, and just like that, we were off. For the price of what it would have cost me to buy lunch and a latte every day for the month, it was pretty much paid for.

While it might not be feasible for all of us to take our friends somewhere far away, many of us could budget for even a one-day road trip this summer. If you consider how much money you probably spend on drinks or eating out, it actually might be totally doable — weekend getaways don't have to just be for rich people! Here are 11 reasons taking your best friend on vacation is totally worth saving for.

1. Your Best Friend Deserves It

She makes you squirt soymilk through your nose. She came over to cuddle and watch Broad City during your second of three breakups with the same dude. Especially if she's had a rough time recently, doesn't she deserve a grand gesture of thanks and love? Figure out what you can reasonably afford, and take it from there — even if it's just a day trip in the car to an amusement park, she's going to appreciate the gesture and adventure.

2. It Will Give Both Of You Something To Look Forward To

The rewards of a trip go beyond the trip itself: A 2014 study published in Psychological Science found that one of the biggest advantages of experiential gifts is that they start garnering you happiness before they actually "happen," because you anticipate them and get excited. (Everyone knows this, but now you have proof.)

My best friend always has me cracking up, but something about going away for the weekend just made it so we seriously couldn't stop laughing. We weren't even drunk or stoned — we were just giddy. Couples get away to remember why they fell in love and have lots of sex. Well, I'm here to report that best friends can go on weekend getaways to remember why they fell in friend love — and have lots of laughs. Seriously, I haven't laughed so much in ... well, since the last time she had me laughing so much.

4. What You Lose In Dollars You'll Gain In Inside Jokes

(That would be Mich, texting me from the bathroom during her birthday dinner.) Inside jokes are one of the best parts of having a BFF — they're your secret language of shared memories, and something about taking a trip seems to intensify the phenomenon. By the time our weekend was over, we seriously had about eight new solid inside jokes, at least two of which I'm pretty sure we'll always remember. I'd tell you about them, but you kind of had to be there. Washwashwash, washwashwash, wash yo hands.

Remember #2? Experiential gifts are proven to make people happier than physical things — not just because of the anticipation they bring, but also because of, of course, the experience itself — and the fact that you enjoy it together.

"And that, according to research, is part of why they're so awesome. It's not just the fact that you're building new memories: it's also that, while material gifts are more likely to be enjoyed on their own, experiences are more likely to be shared with other people (either during or after), and that seems to contribute quite heavily to our general satisfaction with them," Bustle's JR Thorpe writes. "It's what the scientists call 'social connectedness,' and experience gifts are very good at it. If you're feeling distant from a friend, get them an experience to do together." I wasn't feeling disconnected, but this still did bring us even closer.

6. It Will Give You A Reason To Budget You Can Stick To

You might think it's out of your price range to take your friend away for the weekend, and of course, you know your finances best. But if you look at how much you're spending money on coffee, lunch, bars, and online shopping, consider how much you could save with cheering your best friend up as motivation.

Figure out a budget, and see if you can save for a couple months with the trip in mind. Not only will you probably have more success than if you were just trying to save money for your retirement, but you'll also feel really proud of yourself, like you're BFF of The Year. It's a feeling of self-satisfaction not even a $13 cucumber vodka gimlet can buy.

7. ... And It Really Doesn't Have To Break The Bank In The First Place

You don't need to stay at a 5-star hotel to have a really nice place to stay. But knowing what to pick can be tricky — I'm a clean freak, so even a 4-star won't do for me if the hotel is less-than-immaculate. Pro-tip: I used Hotels.com to find the best deal for what I wanted — a place with a pool, great reviews, and walking distance to the beach. On the site, I found out that some hotels were awarded the "Loved By Guests Award," which means they had an average guest review rating of 4.7 or higher out of 5 stars (at the time of the award). Looking at all the positive, rave reviews, I knew that even though this hotel was "cheap," it wasn't going to feel cheap at all.

I was right. Everyone at the Victoria Park Hotel was so sweet, and the rooms were super clean, with really comfy beds. We were so happy — and using my frequent flier miles for the flight meant I didn't even end up shelling out much for the whole trip. You can also be smart about future savings; I signed up for the free Hotels.com rewards program when I booked, which gives you a free night at a hotel after you book 10 nights with the site. (Only eight more nights to go! Totally a reason for another vacation, right?)

8. You'll Talk About The Important Things

With the space to zoom out on your life, you might find your conversations taking on a new perspective and depth. Mich and I talked about what we want for our careers, our living situations, our love lives — all of it. We talked about our fears about growing older, whether we'd want to have kids, marriage, and even the future of our friendship. It was so special to have the time and space to check in with each other in such an in-depth way. She even (in her way) gave me her blessing for the dude I'm with, which meant a lot.

9. Romance Shouldn't Only Be Reserved For Sexual Relationships

I've written before about how men shouldn't be the only ones who romance their partner, but I think it's also very true that romance — and chivalry, for that matter — shouldn't only be reserved for romantic relationships. Doesn't your best friend deserve to be swept off her feet? Taken out to dinner for her birthday? Surprised and pampered?

It's fun to woo your friend a bit, especially if she's currently single. Getting treated to things is one of the perks you tend to lose out on when you're not in a relationship, but there's no reason why that has to be the case if you have a good BFF.

10. If They're Going Through It, It's The Best Thing You Can Do (Besides Just Being Their Friend)

Since my best friend was having the worst year ever, I found myself buying her a lot of random, personalized gifts on Etsy this year. Sure, I was there for her physically and emotionally, but sometimes, I just wanted to be able to make things better for her ... with things.

While those gifts did bring a genuine smile to her exhausted face, I know for a fact that nothing was more effective at helping her relax than this past weekend. Everyone knows there's nothing like a vacation to help you gain some perspective and remember that there's life beyond whatever you're going through. So if your friend's having a rough time, especially, I suggest that now is the time to consider saving for an extra-special trip.

Yeah, so, this is a pretty big reason to do this. You might get to borrow that shirt you gift her, but I guarantee that won't be as much fun as sharing a vacation you'll always remember with the Blanche to your Rose. And if you go to Fort Lauderdale like I did, you'll also get a good preview of what it'll be like when you're both old ladies who retire together. Spoiler: It's going to be hilarious.