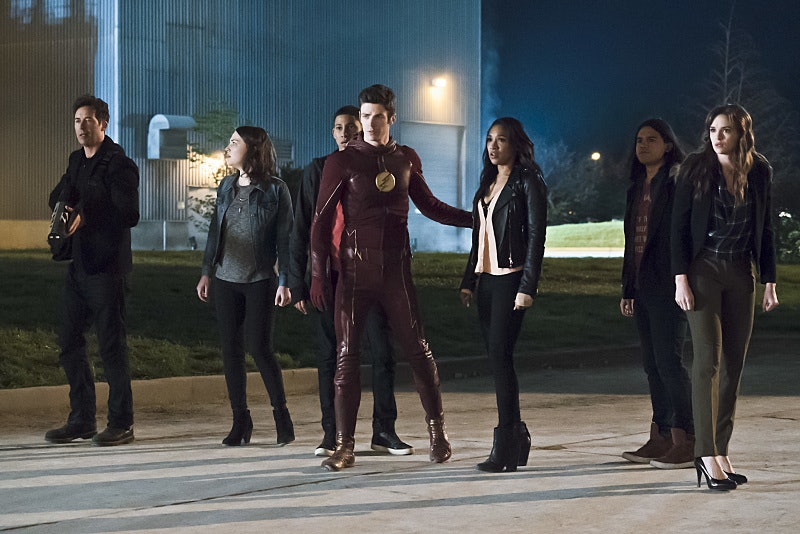 If you love TV — and let's be honest, who doesn't? — then odds are you currently have some mixed feelings about The Flash Season 2 finale happening this week since it means you're in for a summer-long speedster drought now that the show is going on hiatus. First off, let me just say that I feel your pain. And secondly, I'm sad to say that pretty much nothing can be done to ease your pain... at least not yet anyway. Because while normally I'd suggest watching The Flash Season 2 on Netflix to help take your mind off things, unfortunately, it seems as though that marathoning experience won't be able to happen for quite some time. Update: The Flash Season 2 will begin streaming on Netflix on Oct. 4, according to Netflix's newsletter.

To be clear, no official Netflix release date has been announced regarding The Flash Season 2, but if it follows the pattern of Season 1 — which made its streaming debut on the same day that Season 2 premiered (Oct. 6) — then that means you're going to have to wait almost just as long as you will for Season 3 to come around. (So presumably sometime in early October.) It seems like a cruel joke to play on diehard viewers, sure, but that's the way life goes, I guess. Plus, it helps to promote the show and create buzz around the new season, so I kind of get it. Either way, though, our Flash withdrawal struggle is very real, so let's make the best out of a bad situation and at least try to imagine which episodes of the season we're most looking forward to watching again.

Spoilers for those who haven't seen the latest season, obvs.

On the whole this is a pretty depressing episode, especially in light of Ronnie's death (again). But it also introduces the threat of Zoom and the mysterious Jay Garrick, which sets the whole Season 2 plot in motion.

Because anything centered around Leonard Snart (aka Captain Cold) is definitely worth a second look.

As much as it pained me to see Ronnie replaced in the Firestorm dynamic, it was nice to see such a likable character like Jax be brought into the team. This episode also introduced the beginning of Earth-2 Harrison Wells' story arc, which proved to be a very exciting twist.

Never have we seen Barry more defeated than in this moment. It's devastating. It's riveting. It's proof of just how much of a threat Zoom really is.

Nothing can beat a great crossover episode with Arrow, especially one that helps launch the whole Legends of Tomorrow storyline into being with the villainous Vandal Savage.

Getting to see the evil doppelgängers of Caitlin and Cisco (as Killer Frost and Reverb, respectively) made for a truly spectacular episode and allowed viewers to see what life on Earth-2 was really like.

These back-to-back episodes serve as almost one big joint story, so I'd be amiss to include one without including the other. Plus, this one also introduced us to Season 2's biggest mystery (aside from Zoom's identity): the man in the iron mask. We still don't know who he is, but something tells me that the eventual reveal is going to make you want to go back and look for all the clues you may have missed in this moment.

While it's true that the King Shark storyline was somewhat interesting if not also kind of weird, the real reason to re-watch this episode is for Zoom's big unmasking, which revealed him to be none other than the Earth-2 speedster, Jay Garrick. Consider your mind officially blown.

Not only does Barry give up his speed in order to save Wally's life, but we're also treated to a closer look into Zoom's childhood background as Hunter Zolomon, which proves to basically be a darker parallel to Barry's own life.

We knew that Barry probably wasn't dead considering the entire show is based on his character, but that still didn't make his apparent vaporization (via the new particle accelerator) any less heartbreaking.

Arrow fans undoubtedly appreciated Laurel Lance's cameo as her evil Earth-2 counterpart, Black Siren, but the most prominent moment in the episode is watching Barry lose yet another parent right before his eyes when Zoom killed Henry. You may walk away feeling slightly depressed, but that's a testament to how much you care about these characters. Their pain, is your pain.

So even though we may have to wait a while for Season 2 to show up on Netflix, if this round-up of episodes proves anything, it's that it'll be well worth the wait.