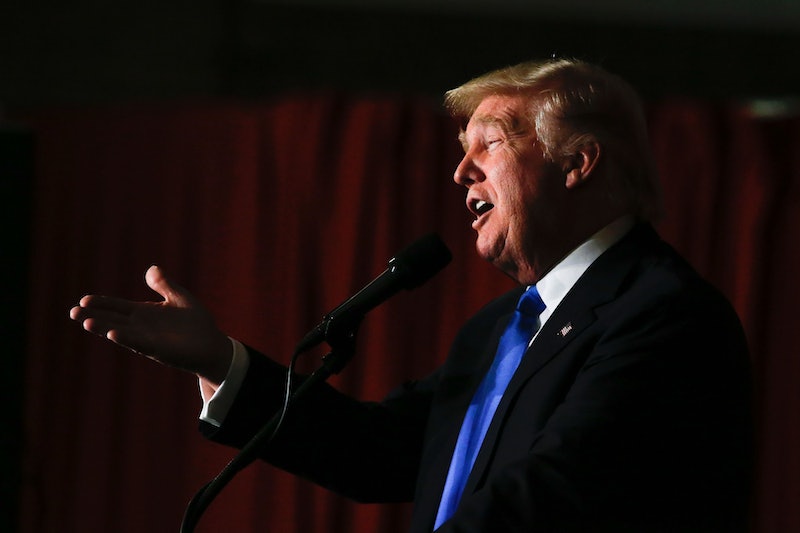 Published Tuesday on Lit Hub, "An Open Letter to the American People" lists the grievances of 472 writers on why they oppose Donald Trump. To be more exact, why they "oppose, unequivocally, the candidacy of Donald J. Trump for the Presidency of the United States."

The writers' open letter lists eight detailed reasons for their opposition to Trump's candidacy. It begins with a mention of "the many ways that language can be abused in the name of power," and closes by calling out Trump's demagoguery:

Because the rise of a political candidate who deliberately appeals to the basest and most violent elements in society, who encourages aggression among his followers, shouts down opponents, intimidates dissenters, and denigrates women and minorities, demands, from each of us, an immediate and forceful response;

For all these reasons, we, the undersigned, as a matter of conscience, oppose, unequivocally, the candidacy of Donald J. Trump for the Presidency of the United States.

"An Open Letter to the American People" is a shareable way to express your support for freedoms of speech and the press. Those in agreement with the #WritersOnTrump may sign an Internet petition to spread the word. In doing so, you join the illustrious undersigned, a group that includes Stephen King, Amy Tan, Junot Díaz, Maxine Hong Kingston, Daniel Handler, Ha Jin, and Tracy K. Smith.

More like this
The 20 Best Audiobooks To Fall Asleep To
By Aoife Hanna and K.W. Colyard
What Is Barack Obama’s Net Worth? He Makes *Way* More Now As An Ex-President
By Hugh McIntyre
How The City Healed Five Years On From The Manchester Arena Attack
By Ella Glover
Harry Styles Called For "Backlash" In Powerful Statement On Abortion Rights
By El Hunt
Get Even More From Bustle — Sign Up For The Newsletter