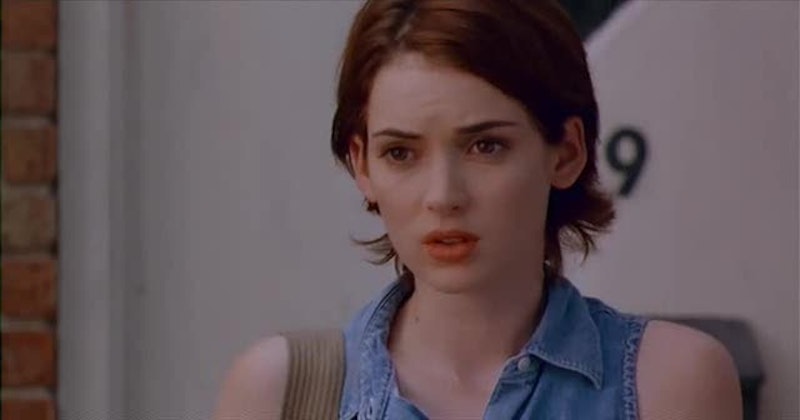 There was definitely a weekend in my life when I re-watched Reality Bites three times with four different people. I think the current total of re-watches has brought me up to a casual 27, but I can’t help it: it’s the ‘90s movie to end all ‘90s movies. It's the one movie every '90s kid should see. Seriously, because, whether you have a deep affinity for the era or you just happened to be born in the age of flannels and music-tinged MTV, Reality Bites can really speak to our generation... never mind the fact that it was about the last one.

Really, it’s all about the combination. I think it’s fair to say that I'm personally incredibly nostalgic for a time I never experienced (I mean, to an extent, I was 3 years old in 1994). It’s also hard to deny that the themes of Reality Bites are simply emerging problems that have hit us full force in the mid-2010s. Either way, it’s a rollicking good time.

But in case you’ve never seen the movie (or you’ve seen it only 26 times and need to be convinced for that 27th), allow me to provide you with all the reasons why Reality Bites is a must-watch for ‘90s kids.

I find Winona to be the be-all, end-all, so, by virtue of her alone, you should get on the Reality Bites train. It's really one of her Winona-est roles, but, at the same time, wayward Lelaina is all of us.

Forever deadpan, keeps a list of her conquests (although she definitely gets freaked out when she decides to get tested for HIV), weirdly obsessed with the '70s? Vickie could've carried the movie on her own, or I would've watched an entire film of Lelaina and Vickie talking at a diner, but of course there has to be a romantic subplot. Which brings us to...

3. Ethan Hawke As Your Musician Non-Boyfriend

We all have a Troy just messing up our lives with his pseudo-philosophy. We all still pick him over Ben Stiller. It is our fatal flaw.

4. The Innovative Ways Of Scamming Parents Out Of Money

Somehow, between Reality Bites and now, 20-somethings had to take a liiiiiiittle bit more from the parental well in order to survive. Lelaina is gifted a gas card from her father, who promises he'll pay for it for a year. Obviously, she uses it to get food and do cash trades; the latter move basically pays her rent. It's ingenious thinking, definitely more slick than my parental scamming move which I call, "you can help pay for these Trader Joe's groceries or I can not eat for a week."

5. The Throwback To Gen X-era MTV

The channel Lelaina passes off Reality Bites to is technically "In Your Face," a faux network that's "like MTV but with an edge." Whatever, guys, it just reminds me of a happy time when I didn't have to associate the channel with being 16 and pregnant.

Still such a good song.

7. The Entire Soundtrack In General, Though

I picked up the CD at a thrift store for 75 cents, and from U2 to Lisa Loeb (remember Lisa Loeb?) it's phenomenal.

8. References To Shows You've Only Heard About Through Their CW Revivals

I'll take Lelaina's word for it, though.

9. Lelaina's Attempt To Date, Which We Make You Feel Better About Your Last Tinder Blunder

Unless you blurted out, "I'm a non-practicing virgin" on said date, but, to be honest, that seems to be the subtext in using the app in the first place.

10. The Existential Struggle To Find Yourself After Everything You Know Falls Apart

Suffice to say Lelaina doesn't have an easy time when she gets laid off from her production assistant job.

11. The Comforting Lack Of Job Security

I mean, it's comforting to me. I'm glad Lelaina's circle is saddled with weird odd jobs just like, you know, the majority of my friends in Brooklyn (and the majority of everyone's friends in Brooklyn). I am distressed, however, by the fact that Vickie makes $400 a week working at The Gap, and that's still just about how much we're taking home in 2016... you know, with far fancier jobs than working at The Gap (no offense, bb).

I still get a little emotional when Lelaina says she thought she was really going to be something at the age of 23. I'm 25 now, so, with all my wisdom, I can also laugh at that delusion, but this was very my mindset fresh out of Rutgers... chain-smoking, marathon-watching and joblessness followed, obviously. It got better.

13. The Fact That While The Aesthetics Are All So '90s, This Film Could've Been Done Today

In fact, since our modern aesthetics are basically just '90s reduxes, it further enforces that Reality Bites is just as relevant now as it was when it first came out.

So ease your little unemployed heart and pop Reality Bites into your VHS player today. You won't regret it.