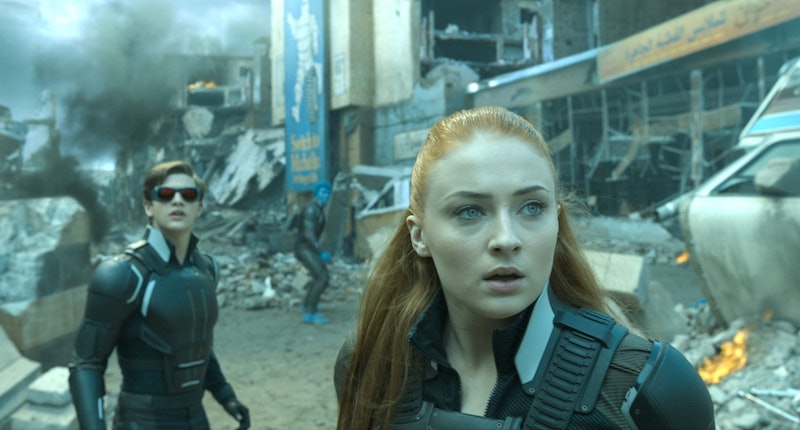 X-Men: Apocalypse could be the last X-Men movie as you know it. With actors' contracts up for negotiations and the fate of some characters unknown, the next round of X-Men movies will likely take the story of the reboot in a very different direction. With that in mind, filmmakers have chosen to introduce a slew of new characters to the franchise in Apocalypse, as well as plant seeds for possible spinoffs, à la Wolverine and Deadpool, should main actors choose not to return to the franchise. So if another X-Men movie does happen after Apocalypse , there's a lot that could happen to make it worth fans' time.

Apocalypse marks the third film in the X-Men reboot starring Jennifer Lawrence as Mystique, Nicholas Hoult as Hank/Beast, Michael Fassbender as Magneto, and James McAvoy as Charles Xavier, and it could be the last. Lawrence has previously declared that she would not return for another round with the X-Men (a sentiment she has since walked back), and word is Fassbender and McAvoy are also on the fence about returning. In an interview with Entertainment Weekly , Lawrence revealed that she and her X-Men: First Class co-stars had made an un-official deal regarding their future as X-Men. "Fox should be terrified because we made a deal that if one of us doesn't come back, none of us will," she said. Whether or not that actually comes to pass, who knows. X-Men: Apocalypse did leave the door wide open for the actors to return in future films, and that's just one of the possibilities for the next X-Men movie. Here's what that film could be about.

Probably the most obvious, and most desired, route for the next X-Men movie is the new X-Men team. Apocalypse ends with the assembling of a new generation of X-Men, composed of Jean Grey, Storm, Nightcrawler, Scott/Cyclops, and Quicksilver. It's a pretty impressive group, made up mostly of actors new to the franchise, most of whom have likely signed multi-film contracts. There's no question that these new X-Men will be featured in the next X-Men movie, the question is whether or not they will appear on their own.

Despite what you might have heard, Mystique doesn't die in X-Men: Apocalypse , a narrative choice that suggests that filmmakers fully intend to at least try to get Lawrence to reprise her role as Mystique in the future. Apocalypse ends with Mystique and Hank taking over from Magneto and Charles as the new leaders/instructors for the X-Men. If they do sign up for more films, then the next X-Men movie would probably be about the new X-Men's next battle, trainers and teachers included.

Wolverine's cameo in X-Men: Apocalypse could potential set up a new wave of Wolverine origin films thanks to his brief encounter with a young Jean Grey, who helps him escape the U.S. Government and gives him a few memories to hold on to.

Psylocke walked away from the final fight between the X-Men and Apocalypse. And, though she was seduced by the dark side in this film, it's possible she could either reappear to team up with the X-Men or to fight them on her own in future films. Given actor Olivia Munn's enthusiasm for the role, and the fact that she was featured prominently in promotional materials despite having a relatively small (and mostly silent) role, I'm guessing Psylocke will be back in some capacity in the next X-Men movie.

Apocalypse ends with Magneto still unaware that Quicksilver is his very own, fully-grown son, and Quicksilver still debating whether or not to tell him. If Fassbender does return as Magneto, the next film might be the perfect time for a father-son reunion. And, who knows, maybe Quicksilver's long lost twin, Scarlet Witch, can join them?

Of course, any future X-Men movies are also guaranteed to introduce more new mutants, both young and old, and will move the plot forward towards the idyllic ending of X-Men: Days of Future Past — mainly a romance between Scott and Jean and Wolverine's eventual arrival to Charles' mansion. However they get there remains to be seen.