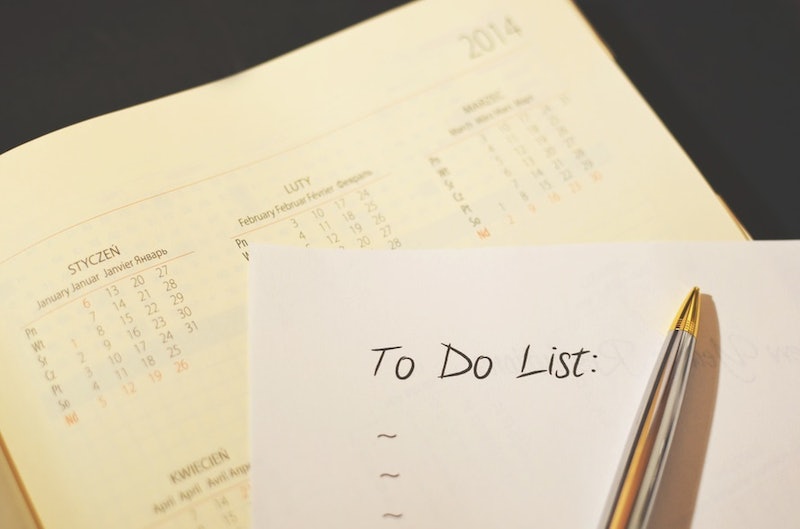 I like to think of myself as the Sticky Notes Queen. You always know if I'm nearby because you'll find the trail of sticky notes I've left myself as reminders of things I need to do. Alas, I often fall short, because I still forget to do those things anyway — but this morning, I discovered a strange trick that can help you remember things better. Now maybe I'll finally stop forgetting to fold the load of laundry that's been sitting in the dryer for four days.

The trick is actually pretty simple. A new study published in Psychological Science refers to it as "reminders by association," and it involves pairing random objects (physical ones) with things on your to-do list. Then, when you see that object later on, you'll remember that thing you were supposed to do. Here's a simple example used in one study: Participants were given coupons to be used at a coffee shop. Some of the participants were informed that sitting on the counter at the shop would be a toy, as a reminder to use the coupon. There was no obvious connection between the toy and the coupon, but the people who had been told to look for it utilized their coupons substantially more than the participants who hadn't be given the same cue.

There are a couple things you can do to make this trick work efficiently for you: The first thing is to pick a reminder object that stands out. Notice that a toy on the counter of a coffee shop would probably stick out to a customer. If you were to use the pen sitting on your desk, or the toothbrush on your bathroom counter — things that naturally blend in — the reminder could slip right on by you.

The second point that matters is timing. You need to see the reminder at a time when you'll be able to complete the task you've been reminded of. If you wait too long after being reminded, the trick can likely become ineffective.

I wanted to test this trick out for myself, and I immediately knew how I was going to play it. There's one thing I forget to do almost every day: Check the mail. What makes it ridiculous is that I pass the mailbox when I walk my dog, which happens multiple times a day. Sometimes I'll remember as I'm out walking, but I've forgotten the mailbox key and I'm clearly too lazy to turn around and go back to get it. It's even better when my boyfriend specifically requests that I pick up the mail... and I forget anyway. So the mail waits until he grabs it while taking the dog for his nighttime walk.

As expected, I forgot to grab the mail this morning. Knowing that my dog would be due for his next walk a little before lunchtime, I took an old T-shirt he likes to play with and hung it from the doorknob of our front door — something that would never happen unless I put it there. When we got up to go for our walk a little while later, I saw the shirt, grabbed my keys, and holy moly, now I have the mail sitting on the table. I deserve a pat on the back.

Memory by association can be used in a few different ways. In college, in addition to using strange objects as reminders, we were also taught how to remember certain facts by associating them with a place. For instance, in my apartment, I'd stand in a doorway to memorize one fact, the bathroom for another, the bed for another, and so on. It was about forming a unique bond between two unrelated things. I can remember it working for me to an extent; but after a certain point, it feels like too much information is overwhelming regardless of the tricks you have to remember it.

If you're like me and you're obsessed with reminder notes, try the reminders by association trick and see if it works for you!

More like this
These Weird But Genius Things Are So Popular, Amazon Can Barely Keep Them In Stock
By Maria Cassano
These Cheap Things With Near-Perfect Amazon Reviews Will Make Your Home Look SO Much Better
By Dena Ogden
15 Genius Storage Solutions For Your Next Bathroom Refresh
By Emma Garza
Why Experts Say Sleeping With A Fan On Isn’t Totally Risk-Free
By Sophie McEvoy
Get Even More From Bustle — Sign Up For The Newsletter