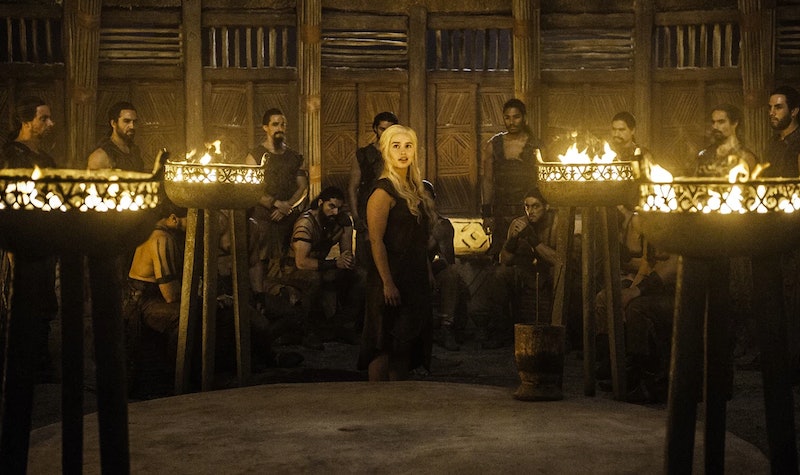 Daenerys Targaryen, the First of Her Name, Queen of Meereen, Queen of the Andals and the Rhoynar and the First Men, Lord of the Seven Kingdoms, Protector of the Realm, Khaleesi of the Great Grass Sea, Stormborn, Mother of Dragons, the Unburnt — but not the Undead. While Daenerys Targaryen has many, many names and god-like talents, like not burning to death and raising dragons, fans are wondering if Dany really is safe from George R.R. Martin’s sword? Will Daenerys die in Game of Thrones Season 6?

Fans are all still reeling from Daenerys’ incredibly powerful scene this season — you know the one. She’s topless, but in an empowering I am woman sort of way, and emerging from the ashes, unburned after defeating the patriarchy, er I mean a room of Khals she just burnt to a crisp. While Daenerys appears unstoppable and unburnt, the unfortunate truth is that she is not immortal. And, after seeing Jon Snow dead (though he is alive now), fans know that no one is safe. Any of the most beloved characters, including Dany, could die on the HBO series. While Daenerys’ storyline has surpassed the books and there are no immediate hints that death is lurking around the corner, that doesn’t mean she is going to make it to the Iron Throne, as much as it pains me to say so. While I want Daenerys Targaryen to be the Queen of all of the kingdoms as much as the next guy — OK fanatically more than the next guy — I am trying to prepare myself for all possibilities. Here are some of the most compelling theories online that prove Daenerys Targaryen could die.

Daenerys Is A Mad Queen

Reddit user mathyoucough theorized that Daenerys’ tragedies may drive her mad. After all, she is the daughter of the Mad King. The redditor explains that this could lead to Dany becoming a villain. While he doesn’t prophesize death, this theory would lead to Daenerys’ downfall.

iDigital Times reported that Jorah may have given Dany Greyscale with a screengrab of the two holding hands in the Season 5 cliffhanger, before Daenerys escapes on her dragon. Fortunately, since we are well into Season 6, I doubt this theory is going to take flight.

Snow On The Iron Throne

In a previous Bustle article, I used Daenerys’ vision from season 2's finale episode, “Valar Morghulis,” to support the theory that Jon Snow will survive, and Dany may die. She sees snow, actual snow, on the Iron Throne — I wonder what that could symbolize? Maybe that Jon Snow will take the Iron Throne? Instead of getting on the throne or pursuing it for herself, Dany walks past it, and into a room with Khal Drogo and her child, who are both alive. Could this be heaven? This scene could prophesize that Jon Snow will take the throne and that Dany will die.

Her Dragons May Kill Her

There are many different versions of this thought online. Some people look to Norse mythology, drawing parallels that prove her dragons may kill her. And, others suggest that her dragons will not forgive her for being locked up and abandoned.

OK, while this theory doesn’t necessarily equal death, it certainly changes Daenerys’ fate. There are several incantations of this theory online, that Jon is not the progeny of R+L (Rhaegar Targaryen and Lyanna Stark), but Dany is. And, a few even prophesize that the paralleled characters are twins! As much as I'd like to think that I have Jon Snow’s lineage figured out, these theories show fans could still be surprised by his and Daenerys’ fates.

But, whatever happens to Khaleesi in the end, she isn't done taking names ... and adding more her to her long-ass title.